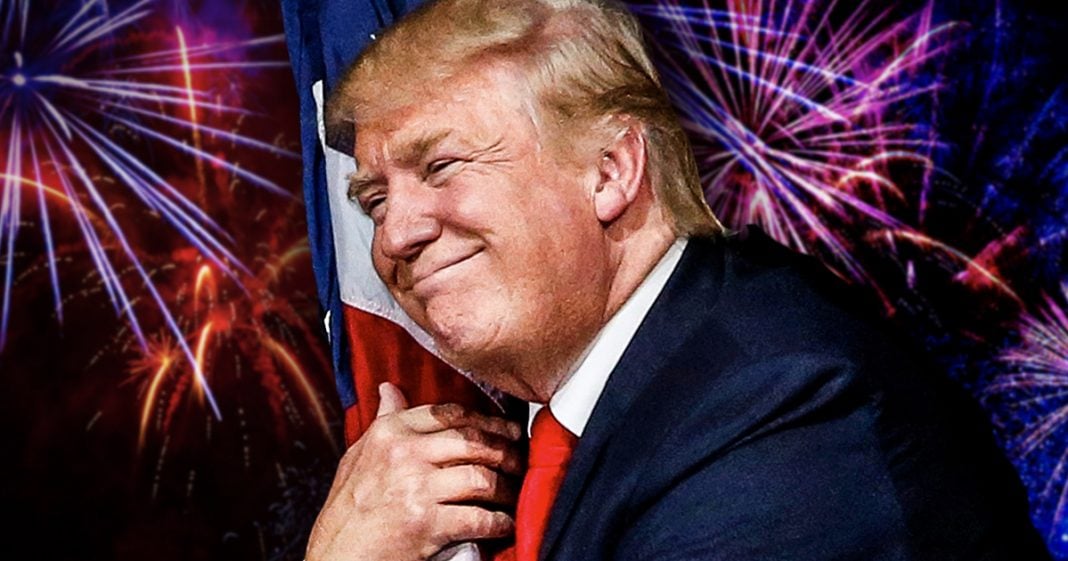 In an odd tweet this weekend, Donald Trump told Americans to “hold the date” because he’s throwing a huge party celebrating America complete with fireworks. The date that we’re supposed to hold? July 4th, better known as Independence Day here in America. Trump is acting like he’s the first person to ever hold a celebration on this day, and the Internet was very quick to let him know how stupid he is. Ring of Fire’s Farron Cousins discusses this.

Great News, everybody. This past weekend, Donald Trump announced the creation of a new American holiday. A salute to America is what his day is going to be. We’re going to have entertainment, we’re going to have a speech from the president. We’re going to have food and fun and fireworks as part of this new holiday he has created and it’s going to take place on July the fourth also known here in the United States as independence day. So essentially what Donald Trump told us he has created is your city’s typical 4th of July ceremony. Here’s the tweet, hold the date. We will be having one of the biggest gatherings in the history of Washington DC on July 4th it will be called a salute to America and will be held at the Lincoln memorial major fireworks display entertainment and an address by your favorite president. Me. This dude just created the 4th of July or at least thinks he created the 4th of July and is out there expecting us to get excited over something that literally already happens in DC every year on independence day. Sure. The president doesn’t always talk about it, but you could literally go to any city in the United States and there is going to be some sort of 4th of July festivities and yet Trump in his excitement, thinks that he just created this, this holiday that again, we’ve been celebrating since the day the country was founded.

This man is absolutely nuts. He is bonkers. He actually thinks that we don’t know, that independence day was already a thing. You know the, the, that we don’t know what Uncle Sam is or what he looks like or what kind of colors were supposed to be wearing and celebrating on the July 4th that we now have to hold the date for as if it wasn’t already a federal, fricking holiday. I honest to God, can’t even come up with enough to say about how stupid this man is. Literally taking credit for something that’s been happening for more than two centuries here in the United States and here’s the best part about it, folks. He said, he says he found some free fireworks, and those are the fireworks were going to be using was it turns out they’re not. They’re not free fireworks. He’s actually taking them from a different 4th of July celebration that’s going to be taking place in Washington DC. So not a homely, does he think he created a holiday? He thinks he just like opened a closet in the White House and like, Oh shit. Free fireworks. No, he took them from different for the of July celebration. So now those people do not have fireworks for their celebration, but I’m sure they’re going to be welcome over at the Lincoln memorial if they want to go see Donald Trump’s huge presidential salute to America. Spectacular.