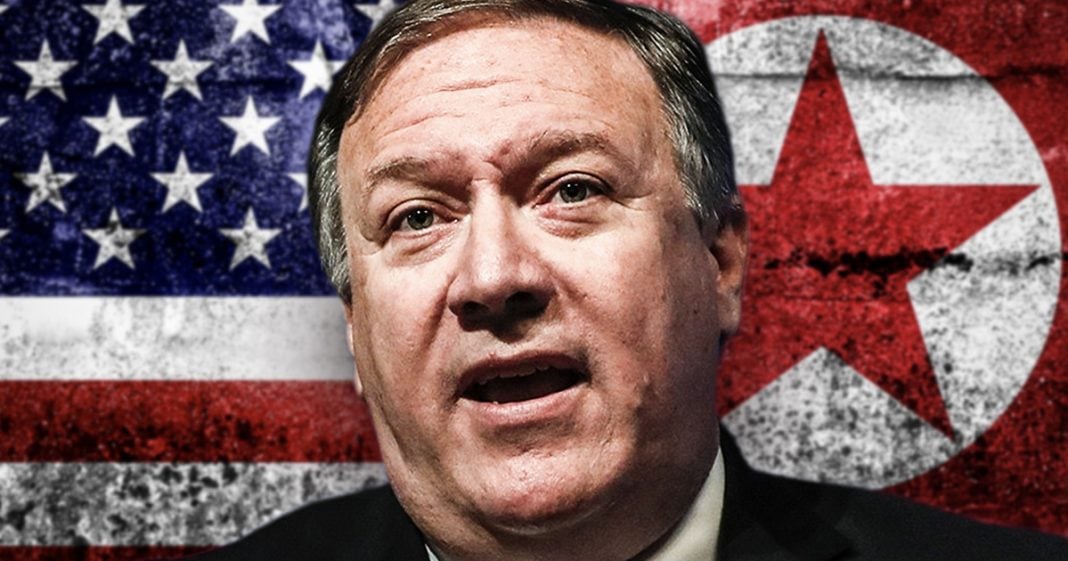 Secretary of State Mike Pompeo isn’t very happy with his own administration’s constant back-patting about North Korea, and he is urging Americans, and his own bosses, to lower their expectations about what can be accomplished with North Korea. Trump is headed to Vietnam to meet with Kim Jong-un, and he has repeated told us that things are going great between the two nations. Ring of Fire’s Farron Cousins explains what’s really happening.

Well, Donald Trump right now is on his way to Vietnam for his little summit with North Korean dictator. Kim Jong-un any promises us. He is totally going to get everything the United States wants out of this deal done and worked out. And when he comes home we are going to have peace with North Korea and they’re going to be one of our super bestest friends. In reality, Trump’s own administration is having to go out there right now and tell the public, hey, um, could you guys just curtail your, your expectations here? Uh, please understand that we’re probably not going to accomplish anything. You know, this is probably going to take lots of meetings and lots of trips and lots of time. So just kind of ignore what Donald Trump is saying and we’re, at least that’s the message that Secretary of State Mike Pompeo delivered to Fox News is Chris Wallace this past weekend. He said that we need to curtail our expectations for this meeting, which again is a stark contrast to what Donald Trump himself has been tweeting out for weeks now that he was going to meet with Kim Jong-un, that they’ve made great progress already and that we’re totally going to seal the deal with this meeting at Vietnam.

Sarah Huckabee Sanders just last week said that we should go ahead and declare it a victory for the president even going over there to speak to Kim Jong-un. That’s, that’s it. Like all he has to do is speak to him. And according to Sarah Huckabee Sanders, that’s a victory. Trump has repeatedly told us that he has accomplished what no other US president ever has and that is getting North Korea at the negotiations table and making a deal with them. Unfortunately, Trump’s own advisors, uh, his own military strategists, his own national security advisors have told us that none of this is true. Dan Coats during his recent testimony, uh, to Congress and Dan Coats by the way, happens to be a Donald Trump’s national security advisor. Um, Dan Coats says that, yeah, North Korea is never going to give up their nukes. They like them, they don’t want to lose them, and there’s really nothing we can do as a country to make them give those up.

That’s what Dan Coats testified in front of Congress. It’s what he said and yet Donald Trump is out there telling us that he is doing better than anyone else, that North Korea is playing nice. And that of course there’s great economic opportunity in North Korea and once you sort through all the BS, that’s what this is about. Donald Trump is not laying the framework for global peace and security in denuclearization. Donald Trump is laying the framework because he wants to have Trump tower Pyongyang. He wants to have Trump towers all over North Korea. Last time they met, he kept talking to Kim Jong-un about the fact that they’ve got wonderful property right here, lots of beautiful beaches, whatever it is. Hey, you can have lots of great resorts here and that’s what Donald Trump wants. This isn’t about de-nuking North Korea. This isn’t about having them play nice with all their neighbors and stop killing their own people. This is about Donald Trump trying to close a real estate deal, and that’s why he’s going for this second photo op, which is all it really is to try to sweet talk. Kim Jong-un convince us that their denuclearized thing, even though our intelligence agencies say that they’re actually increasing so that Donald Trump can lift sanctions against them and allow US businesses to come in and capitalize on a currently untapped market that is 100% what all of this is about.