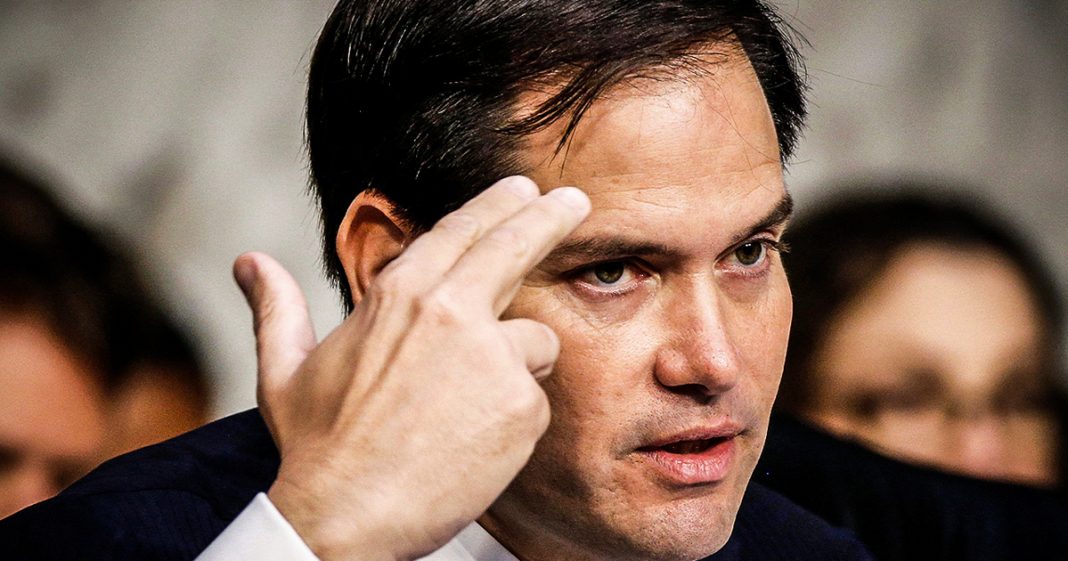 On Sunday, Marco Rubio sent out a cryptic warning to Venezuelan leader Nicolas Maduro that only included a before and after picture of Moammar Gaddafi. One picture was before US intervention and one was right before Gaddafi was brutally murdered. Rubio’s tweet can only be viewed as a threat of what the United States wants to do to Maduro in Venezuela, as Ring of Fire’s Farron Cousins explains.

On Sunday morning, Republican Florida, Senator Marco Rubio tweeted out, what many have been calling a short snuff film as essentially a threat to Venezuelan leader Nicolas Maduro. The pictures, it’s just too simple. Pictures. Both of a former Libyan dictator, Muammar Gaddafi on one side you see Gaddafi happy, you know, ruling his people with an iron fist prior of course to us intervention. And then the other picture is Gaddafi shortly before he was brutally murdered and a sodomized with a bayonet. So Rubio with no other context to each out the pictures side by side after obviously spending several days talking about Venezuela. Now he did not specifically direct this as a threat to Maduro down in Venezuela, but everybody understood exactly what he was trying to say. He was trying to say, Maduro, you play by our rules here in the United States or this is going to happen to you.

He essentially issued a death threat to the leader of a foreign country. Now Rubio himself has gone down there to Venezuela. You know, he’s been pictured around all of that humanitarian aid that’s just sitting there cause Maduro allegedly won’t let it in the country. And Rubio’s mad, Rubio sad. He wants to help the good people of Venezuela and all he wants to do in order to do that as his killed their leader. What’s so wrong with that? Let’s be very clear about something about what’s happening down in Venezuela. Sure. They’re not letting US aid come through their country or come in to their country to help their people. And a lot of people here in the u s are pissed off about that. But did you know that we’re not sending just volunteers down there to go hand out aid. These aren’t just people off the streets of the United States who care about one another.

It’s not church groups, it’s the fricking military. We’ve got military fighter jets that we want to send into a deliver this humanitarian aid. You know these black ops helicopters down there ready to go deliver humanitarian aid armed soldiers from the United States who really are just arming themselves with goodwill and humanitarian aid. Yeah. No wonder they don’t want our aid in there. If it’s going to be delivered by people who could also turn around and shoot them in the head. I can’t blame them for that. Regardless of what you think about the situation in Venezuela and sure Maduro is not a good leader. He is not, you can’t argue and say that he is facts speak for themselves, but under no circumstances does that give us as a country the right to go down there and one demand that he led our military in because we’ve got some bottles of water we want to hand out.

That’s a lie on behalf of the U S and two it does not in any way justify us intervention of any kind at all at all. Even if we were to take everything horrible about Maduro that the Trump administration has told us, none of it would justify going in there with our military. Our military should not be down there whatsoever. If we want to give humanitarian aid, then we need to do what the rest of the countries are doing and actually just send normal, decent God fearing human beings down there to deliver it. I’m sure Venezuela would have no problem with that, but yeah, they’re always going to be a little suspicious of the guy with an AK 47 strapped to his back trying to hand out paper towels and bottles of water. And when you have a guy like Marco Rubio tweeting out death threats to their leader, it becomes pretty obvious why they don’t trust what it is we’re trying to do down there. And when you look at our history as a country, I don’t think anybody should trust us when we say, hey, we’re the United States and we’re totally just here to help.