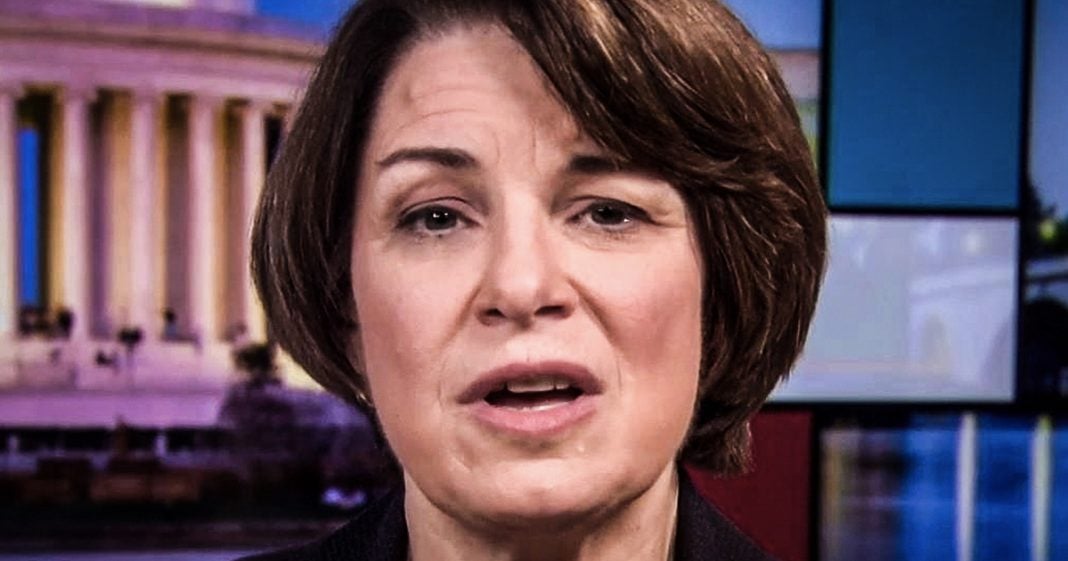 The stories surrounding Amy Klobuchar regarding how she treats her staff have been getting more and more attention in recent weeks, culminating in a story this past week about how she ate a salad using a comb and then had an aide wash the comb. That story is actually quite tame compared to some of the other stories floating around about her treatment of her staff, and that’s what we need to be paying attention to. Ring of Fire’s Farron Cousins explains.

Let’s be 100% honest about something right now. If it were not for the repeated stories telling us how horrible Senator Amy Klobuchar is to her staff, most people in this country wouldn’t even realize that she is currently running for president. Obviously we have much better options out there than Amy Klobuchar are, but because of these nonstop stories about how horrible she is to work for, we have to talk about it right now because these stories are very serious. Now, a few days ago, the New York Times broke a story saying that, uh, Amy Klobuchar are once had to eat a salad with a comb because her aid forgot to give her utensils. So she’s on a flight, has to eat a salad with a comb. And after the flight she made the aid clean the comb, to be perfectly honest, like that story to me, that that’s not even that bad. You know, I, I, I’ve worked in a lot of restaurants where I’ve had to clean things where I would, you know, beg to instead be cleaning salad off of a comb.

But you know, sometimes you have to do weird things for your boss. That’s not that big of a deal to me. What is a big deal? Are there reports that she would treat her staffers as subhuman, that she would throw office supplies at her staff, that she would berate them via emails to everybody on staff calling people out, making them feel like crap and telling everyone what a horrible job this Stafford did. Those bother me. I have a real problem with that. You know the salad comb thing, it’s weird, don’t get me wrong. It’s weird, but it’s not necessarily abuse. These other stories, these are abuse. These are actually stories, especially if she threw stuff at her staffers. These are stories that actually need to be investigated. I mean, this woman needs to be under investigation instead of running for president.

The biggest thing here, and yes, let’s be perfectly clear, there are some former staffers who say, hey, she was a dream to work for. I loved it. I have nothing bad to say about her. My experience with super pleasant and I get that too. We have had people you know here at other places I’ve worked who hated management, they hated the boss, did nothing but talk about how horrible they were, how bad they treated him while the rest of us were sitting there looking, watching interactions between the two and saying, this isn’t true. What you’re saying didn’t actually happening. You’re twisting it in your head. So I guess technically there could be a scenario under which that’s what’s happening with clover char. I don’t think that is the case here. There are some bosses out there who are just bad. They’re bad bosses, they’re bad people.

They mistreat their employees just because they’re in a position of power and the employee is not. And I think that’s what we’re dealing with with clover char. And you learn a lot about somebody by seeing how they treat those underneath them. And that tells us everything we need to know right now about clover char. She is not respectful to the people who have kept her career going. I mean these people, these staffers, you know, they, they, it’s not just get me coffee, clean this, comb their salad on it, it’s draft this report, make these charts, pull these figures, make me look good and sound smart. When I go to the Senate floor without staffers, members of Congress look just as dumb as the rest of us, and they deserve to be treated with respect. And if clover char can’t do that in her office at the Senate, and we have no reason to think she would do it in the White House.