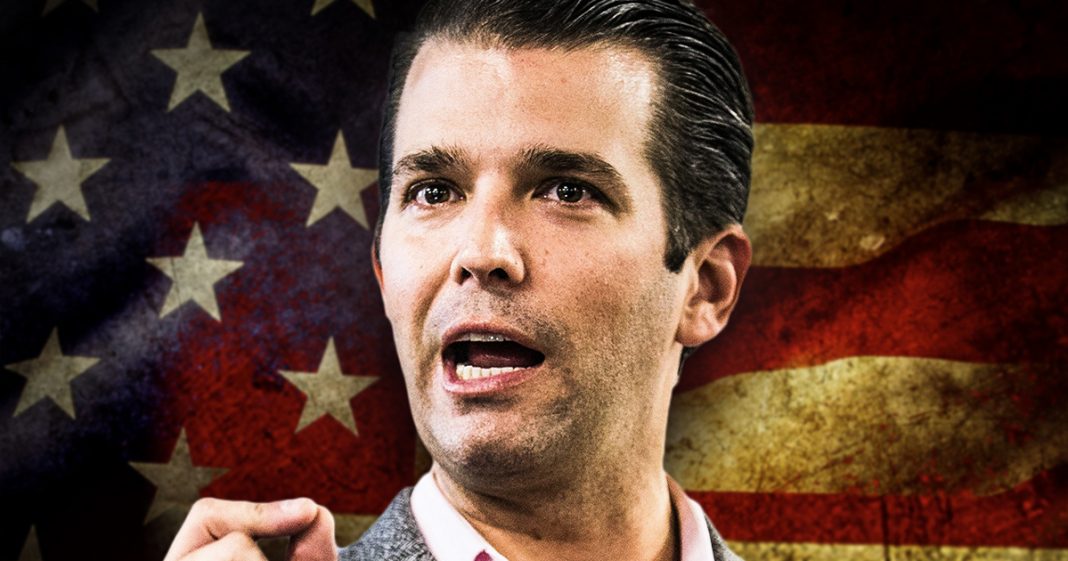 Donald Trump, Jr. thinks he might want to throw his hat into the ring for the 2024 Republican nomination for President, and he shared a cryptic picture on social media of a follower saying that he should be the nominee with no additional context. Ring of Fire’s Farron Cousins explains why this is the worst idea imaginable, and how Junior doesn’t understand how much the public hates him.

Well, even if Donald Trump survives all of the investigations doesn’t get impeached and then somehow wins another four years in office in 2020 that may not be the end of Trump rain here in the United States because there is a chance that Donald Trump Jr. might throw his hat into the ring for 2024 and try to carry on his father’s disgusting legacy. A few days ago, Trump Jr. tweeted out an Instagram story that was nothing more than a post of somebody who follows him suggesting that he run for president in 2024 now, a Jr. did not add any context to it. Did not say anything about it. Just tweeted it out that this person was saying that Trump Jr. should run in 2024 rather cryptic message. Now again, if it was just this one message really wouldn’t mean all that much. Right? Uh, but the problem is that Fox News has been kind of pushing him to run for president.

They’ve told him he, he’s got a great political future ahead of him should he choose to go that route. So he certainly has the people whispering in his ear, you would be a good president. Don’t rule it out. So I, I think we’re actually getting closer and closer to the point where Trump Jr. would consider running for president in 2024 now, here’s the thing I have to say, we have known and we have seen and we have read the studies by the way, that if proven this, that a lot of the Trump supporters out there, the male Trump supporters support him because they themselves are lacking a little bit in the masculinity arena. And that’s actually what studies have shown. So don’t get angry about that. This is science at work. And so they latch on to Donald Trump because they believe that he is the epitome of masculinity and that is what a man should be.

Now they think the same thing about Donald Trump Jr.. So I ask you this, if Trump Jr. truly worthy alpha male here, why would he wait for 2024 be the Alpha primary, your father in 2020 and usurp the throne for yourself? That’s what a real alpha would do. You know, just throwing that out there in case Trump Jr. wants to show his father who the true leader of the Trump family is. But in all seriousness, the real issue is the fact that Donald Trump Jr. definitely does want to run for president. Eventually, Donald Trump Jr. does not know how to be president. Donald Trump Jr. doesn’t even know how to run the businesses that his father handed over to him when he became president. Now, Donald Trump has been in PR, a pretty crappy businessman, right? We have seen multiple bankruptcies. We have seen, you know, horrible conditions in his restaurants.

Uh, the business is up in Chicago that, oops, we forgot to pay our taxes for a year or two. Now imagine as horrible as Donald Trump himself is how bad Jr. would be because Jr. was handed the keys to the kingdom and seems to be letting it all fall apart. The few businesses that Trump had that were successful Jr. himself is managing to kill those, couldn’t keep his home family life together at home because he wanted to go out and start sleeping with a Fox news host, which may be one of the reasons why Fox News continues to tell him to run for president because they would love to see one of their own serving as first lady, whatever the reasoning is, whatever the rationale, let’s be perfectly clear about something as big of a disaster as Donald Trump has been. Donald Trump Jr. would be a thousand times worse, mostly because he’s about a thousand times dumber than his father is.