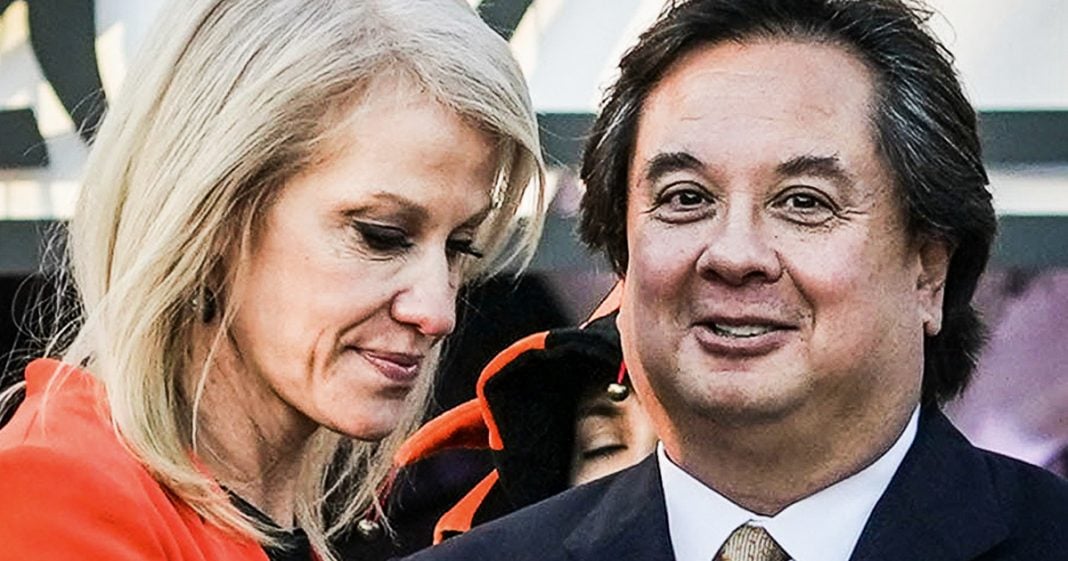 George Conway, the husband of Donald Trump’s closest White House friend Kellyanne Conway, said recently that we need to be worried about the President’s mental health and that we need to be questioning whether or not the man is fit to serve in office. These claims have been echoed by countless others in recent weeks, but Conway points to a string a made-up information that the President recently spewed as the best example. Ring of Fire’s Farron Cousins discusses this.

Last friday. Donald Trump said that Barack Obama was on the verge of getting us into a nuclear war with North Korea that would have in fact ended up being world war three. This is what he had to say, said, I believe he would have gone to war with North Korea. That was going to be a war. That could have been a world war three to be honest with you. Trump said, here’s the thing about this weird claim. There is no evidence whatsoever to back it up. There was no suggestion whatsoever during the entire Obama administration that they were ready to ever attack North Korea or that it was something that they even considered, and if they did consider it, then I guess they did a damn good job of concealing it from the American public. But Trump is trying to basically repaint the Obama administration is something worse than it actually was.

Now, I was no fan of Barack Obama’s foreign policy, but at least we know he wasn’t going to go over there and bomb North Korea. Couldn’t say the same about Trump for at least the first year and a half of his presidency. But nonetheless, this comment drew the attention of George Conway, Kellyanne Conway’s husband. And here is what George Conway tweeted out in response to this. We should highly questioned the mental stability of a president of the United States who would lie about whether the United States had been on the verge of starting world war three with another state possessing nuclear weapons. So George Conway, again, husband of Donald Trump’s best friend in the White House, Kellyanne Conway, the woman who invented alternative facts. George Conway is out there telling us we need to question the president’s mental stability. And he’s not wrong. And in fact, he’s not even the first person to suggest this. In just the last few weeks, we have seen mental health experts.

We have seen presidential candidates on the Democratic side, particularly Elizabeth Warren. We have seen members of the intelligence community admit that they had considered using the 25th amendment because they didn’t think he was fit to be president. And now George Conway, who mother Jones, um, incorrectly identifies as a proud democrat. George Conway is not now, nor has he ever been to my knowledge, a democrat. He is a conservative. He is a classical conservative. So I don’t know how mother Jones got that wrong, but nonetheless, you did fix it. Um, either way George Conway is correct in this Elizabeth Warren talking about the 25th amendment is correct in this, the intelligence officials talking about the 25th amendment, they are correct in this, the mental health experts that have been warning us since day one, they are correct. There’s something wrong with this man. He lies about things that are verifiably wrong. And when I say verifiably wrong, what I mean is any idiot can get her a computer and show that the president is lying. We know that these things didn’t happen, but he has no qualms about telling us otherwise anyway. And yeah, there’s plenty of people in his base that are not smart enough to know that he’s lying to them or they don’t care that he’s lying to them.

But this shows this lie, the lie before it. The 8,000 before that, every one of them shows that this man, Donald J. Trump is not mentally fit to be the president of the United States. And every day that we just sit here doing nothing about it, there’s another day that something horrible could happen because this man is unfit to serve as our president.