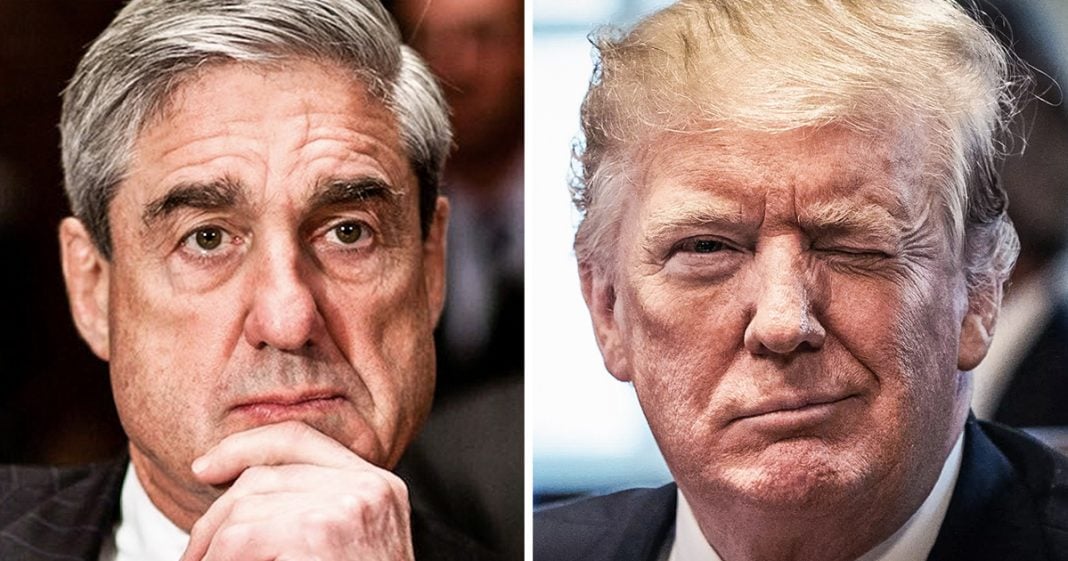 The Trump administration is reportedly expecting the Mueller Report to be ready “any day now,” but we still don’t know if the new AG or the administration are going to let the public have a look at it. Polls show that a majority of both parties want the final report released, with each side hoping that it will confirm their beliefs. Democrats in the Senate are working on a plan that would force the administration to release the report, and Ring of Fire’s Farron Cousins explains what’s happening.

So right now, at least according to the White House, they are expecting that Mueller report to be finished any day now. It could happen right now. It could happen in five minutes. It could happen tomorrow, could happen next week. They don’t know they’re sitting on pins and needles because this report could come out at any moment because after all, CNN told us that some members of the Mueller team had had already left there. They’re going back to their old jobs. So obviously it’s winding down. The truth is honest to God, we don’t know. We really don’t know this thing could go on for another 12 months if necessary. We really don’t know. We’re relying on a warmonger and corporate media network to be telling us the truth, which isn’t exactly something that we should expect from them. But nonetheless, the White House is expecting this. Democrats are expecting it. And Democrats are also expecting the Trump White House under new, uh, Attorney General William Barr to block it from being released to the public.

And they’re not happy about that. And rightfully so because they also understand that polls show that a majority of Republicans and a majority of Democrats want this final report released to the public. There’s different reasons why each group wants it released. I’ll get to that in a moment, but first and foremost, just to go back here, Democrats in the Senate are threatening to subpoena the final report from Robert Muller or even subpoena Mueller himself to come openly testify what was in the report. If Donald Trump and the Trump administration decide to hide it from the public, and let’s keep something in mind here. The only reason they would hide it is if it contains damaging info on Trump or his family. That is the only reason they would hide this report. That is it. So if they do hide it, we can go ahead and assume that yeah, it has some really bad stuff about some really dirty deeds that the Trump family’s been doing for years.

But here’s the thing, and back to the poll numbers of majorities wanting this thing released. Republicans want it released because they think it’s going to exonerate Donald Trump. Democrats want it released because they think it’s going to make Donald Trump look bad and then I assume there’s probably a small sliver in there who just say, Hey, I want it released because we spent money on it and we spent time on it. We’ve talked about it for two years. Let’s just see the damn thing. Honestly, I kind of fall in that middle sliver. I don’t think that this report is going to give us, you know, the information necessary to take down Donald Trump. I wish it would. I hope it does. I don’t think it will, but if it exonerates him, very unlikely. But if it does, I also feel like you know what? We need to, we need to know about this so that we can move on, focus on policy and defeat him that way.

Honestly, that might actually be even better for the Democratic Party at this point because you’re not going to beat him by telling the country that he is a criminal. We know it. Hell, even a lot of Republicans think he’s done some dirty deeds in the past, but they still support him. You only get a beat him by talking about policy and if we move on past the Mueller report, if it’s done and over with and whatever, we can focus on policy and we can win that way without having to bring up Muller, the investigations or the lawsuits. So the allegations, we can focus on policy and that’s what we need to be doing as a country anyway. But of course as well, if it shows that the guy committed high crimes or misdemeanors, then yes, he needs to be removed from office and then Democrats can sale to an easy 2020 victory against a very weak president pence who actually might also be taken down from the Mueller report depending on what’s in there.