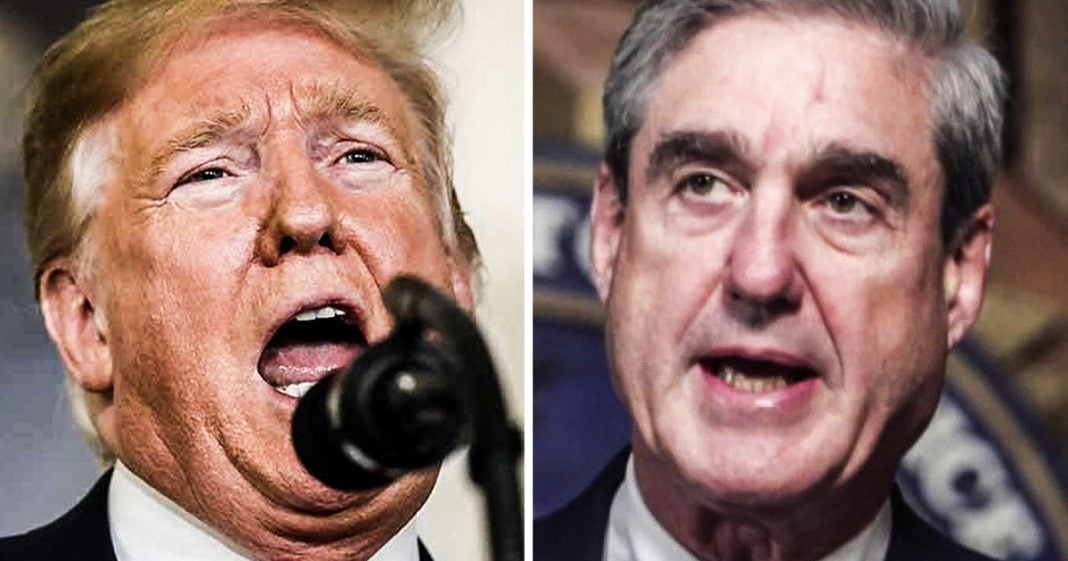 According to a new report from The Washington Post, Donald Trump’s “inner circle” in Washington, D.C. is very concerned that the release of the Mueller report is going to seriously damage Donald Trump, at least politically if not criminally. While most of us are hoping that the report is going to remove Trump from office, the truth is that we may not get any evidence that could lead to his removal, and then each of us are only left with our own confirmation bias and nobody’s minds will change. Ring of Fire’s Farron Cousins explains what’s happening with Trump’s inner circle and why we need to curtail our expectations for the Mueller report.

So I know right now everybody’s sitting on pins and needles after we got the news that the Mueller report might wrap up next week, might even be released next week. Who knows? But what we do know is that the people that have been working on the Muller, a, a special prosecutors team, they’re starting to go back to their old jobs there. They’re leaving because they personally are finished. And reports suggest that because these people are finished, it means the whole thing is wrapping up. Could be ready next week and we could be good to go and move on from there. Um, and as such, has these reports come out a source close to the president told the Washington Post that there is palpable concern among don or Donald Trump’s inner circle, that this report is going to be very damaging to him politically, but not criminally politically. It’s going to be bad, but it’s not going to result in the president getting indicted or going to jail or getting removed from office.

That is the optimism that this inner circle has. And the reason I did the little air quotes around source close to the president talking to the Washington Post is because that’s how the Washington Post put it. But we’ve seen in the past that Kellyanne Conway is typically the person who speaks anonymously to the press and she has a pin Sean for doing it with the Washington Post. So I wouldn’t put it past Kellyanne Conway to be the one who said yes, we’re concerned it’s going to hurt him politically, but he’s not going to jail for any of the crap that you know people think he is or think he’s done. Now here’s the thing, I, I don’t disagree with that. I don’t, and that may come as a shock, but I don’t know that there’s going to be anything from this Muller report that is going to result in Donald Trump either being impeached and removed from office or hauled away in handcuffs.

Hell, he may not even get an indictment out of any of it. Now, don’t get me wrong. I would love for any of those things to happen. My preference, obviously it would be for him to be hauled away from the White House in handcuffs. I do personally believe that he has broken the law, have repeatedly, the question is can you prove it? And that’s what makes it so difficult. It’s not that I don’t think he’s squeaky clean, it’s that I think it’s very hard to prove. As someone who’s, you know, worked alongside lawyers for 15 years, I know that even a slam dunk case is not a slam dunk case because the such a thing doesn’t exist. Even with all of the evidence that you can present in a trial, it’s still possible to not get a conviction. It’s still possible to not win your lawsuit. Even when you have documents of the people on trial saying, we’re going to kill people with this product. Sometimes you lose. And that’s why I approached this a little bit more skeptically because unless Robert Muller has tied up every single loose end, I’m afraid this unnamed source at the White House close to the president may actually be correct. And yeah, it would be damaging for him politically for about a week. And that’s it. And I hate to say that too, but again, been doing this a long time folks. We have seen stories, pop stories that we thought for sure we’re going to result in the impeachment of George W. Bush.

And a week later everybody had moved on to something else. It was gone. We’ve seen stories like that come and go from this administration every other week.

It doesn’t work like that. It doesn’t. So yeah, again, it’ll hurt him politically for a week or two and then people are going to move on there. Forget about it. Everybody’s already got their own confirmation bias. So if you think the report’s going to be damaging to him, it will be. If you think it’s going to exonerate him, it will. Or it will be Trumped up charges that are completely bogus. Nobody’s mind is going to be changed by any of this. And that’s something we all have to understand because we kind of need to start moving past this and focus on the 2020 election, which is only going to be one by talking about policy issues and why Democrats are better than Republicans. The mauler report is not going to be a slam dunk. It’s not going to be a silver bullet, and it’s not going to be a big campaign issue in 2020 trust me, but more importantly, don’t try to make it one. We can win on the issues. 2018 just proved that public opinion polls prove that. So let’s not look at the Mueller report as either the end of this or the end of our hope, because we got a lot of hope out there right now with these presidential candidates who have announced, let’s put our faith in them and not a mystery report that may or may not be coming out in the next week.