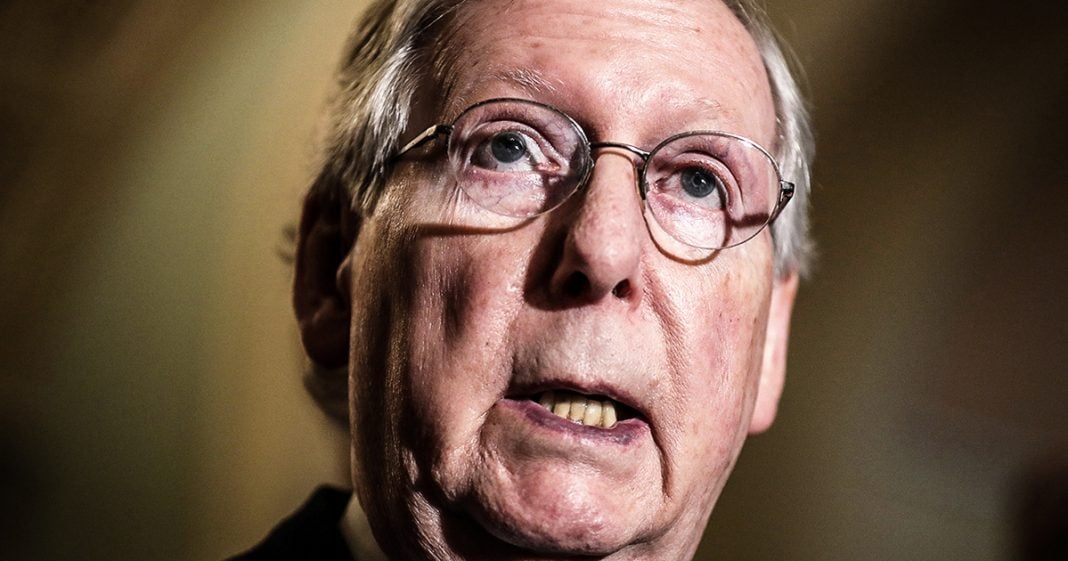 Mitch McConnell has been caught red-handed, thanks to a trove of more than 800 emails, directing business leaders from his state of Kentucky to meet with his wife, Secretary of Transportation Elaine Chao. These emails show a coordinated effort by McConnell to repay the people who have helped him throughout his career, and it also shows that both McConnell and Chao are using their connections and their personal relationship for political gain. Ring of Fire’s Farron Cousins explains why BOTH McConnell and Chao need to be removed from office immediately.

According to more than 800 emails that were obtained via freedom of Information Act request. Mitch Mcconnell has been directing businesses from the state of Kentucky to his wife who happens to run the department of Transportation. Elaine Chao, who is the secretary of transportation in the United States. He has been directing people to her so that she can meet with them and give these sweetheart deals to people back in Mcconnell’s home state so that he can appease the people who help to put him in office. This, ladies and gentlemen is a perfect example of not just cronyism with Mcconnell and his wife Chow, you know, directing people back and forth trying to help McConnell’s campaign. It is a pay to play. It is corruption, and it is without a doubt or should be without a doubt enough to remove these two from office forever. Here’s the thing about this story.

You’ve got the DOTC under Elaine Chao’s leadership right now saying, no, no, no, no, no. We’re not giving any kind of favoritism to these good buddies of Mitch Mcconnell. The people who help put them in office that he’s sending our way. Uh, you know, but we’ve given them tens of millions of dollars for new projects that you know, really could have gone anywhere else in the country, but it’s totally not favoritism. And they’ve even got other people, other staffers for other members of Congress to say, no, it’s not uncommon for, for a Democrat or a Republican to send people that way towards the d o t to put in a good word for him. Yeah, I know it’s not uncommon, but what is uncommon is what was revealed in these emails that the people from Kentucky that Mitch Mcconnell was sending child’s way, 100% did get preferential treatment. Their projects and the grants that they received to do them are because of who Mitch Mcconnell is because of who Elaine Chao is.

And because Mitch Mcconnell’s political ambitions are not over yet, Mitch Mcconnell wants to run for Senate again in 2020. He’s going to run again and he wants to make those constituents, those business owners happy so that they’ll donate to his campaign. And the only way he can do that is by getting them special favors by going to his wife. And saying, Hey, this guy might be able to donate some money to me or he’s got a lot of pull in the state. He might convince people to vote for me. You need to approve his project. Now, there was nothing necessarily as quid pro quo spelled out as that in the emails, but the emails do paint that picture for us. There’s one email that talks about the fact that you need to flag any Kentucky project to make sure that we see it.

If you don’t believe that that’s preferential treatment. If you don’t believe that that is favoritism, then I have a bridge in Brooklyn. I would love to go sell to you. The truth is that Mitch Mcconnell is more corrupt than any of us could have imagined. His wife is just as corrupt as he is and this story proves beyond a shadow of a doubt that both of them need to be removed from office immediately. Mitch Mcconnell cannot be trusted. Mitch Mcconnell is abusing his power. Miss Mcconnell’s wife Elaine Chao is a views abusing her power. This is what politics, what our processes were actually designed to prevent, and yet here we are having to talk about this and yet not actually really seeing this story develop in any major outlets. This is the biggest story right now, the Republican Senate majority leader in engaging in a quid pro quo with his wife to help businesses inside his state so that he can get their support when he runs for reelection. That is textbook political corruption and Mitch Mcconnell needs to be removed from office immediately.