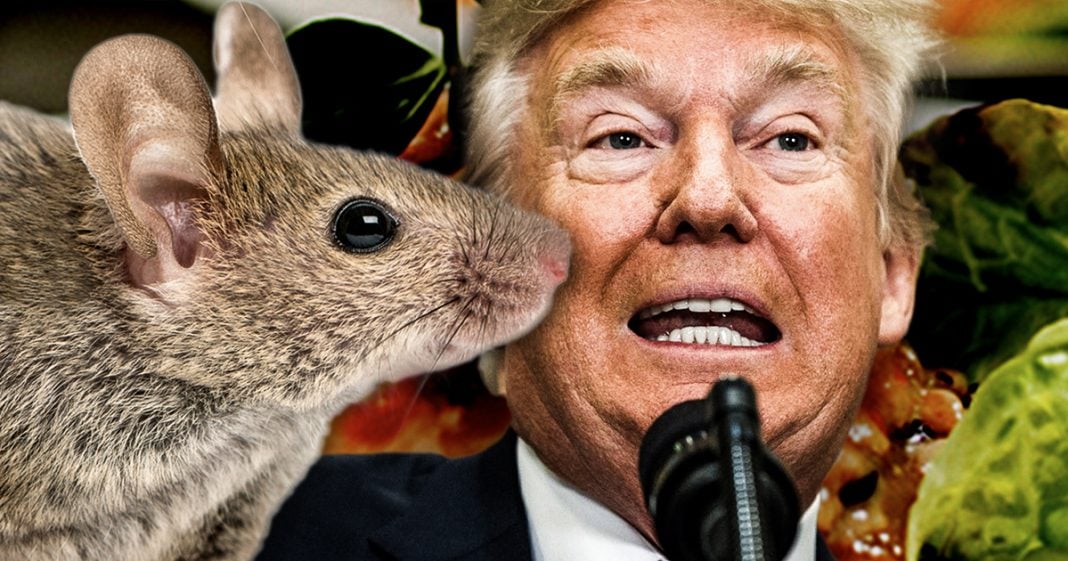 Donald Trump’s restaurants in the Northeast aren’t fairing so well, and the restaurants that prominently display his name have been repeatedly flagged for the number of live mice and rats found in them, in addition to improper drainage systems that are leaving backed up sewage in the restaurants. The lack of cleanliness in these establishments is a massive safety concern, and if these problems aren’t addressed, they could likely be shut down. Ring of Fire’s Farron Cousins discusses this.

Donald Trump has not divested from his properties and therefore he does still technically remained the chief executive of everything within the Trump organization. You know, the golf clubs, the hotels and the restaurants, but the overall running of the Trump organization has been left to Beavis and Butthead, Eric and Donald Jr and according to a recent report, the two boys aren’t really doing a very good job of actually running their businesses or hell even checking up on them because as it turns out, the restaurants that reside in Trump properties in the northeast, New York, the Bronx, New Jersey, these restaurants have been popped for major health code violations just in the last month and a half. And I’m not just talking about oops, they accidentally left a piece of chicken out. I am talking about sewage backing up into the restaurants because they didn’t install the proper drainage systems. Talking about live mice being spotted by health inspectors in these restaurants, food surfaces going uncleaned, people using single use food products on multiple different food products, employees not washing their hands, employees touching raw food and then touching other things. Very basic restaurant. One O one. You can’t do this kind of things happening at Trump restaurants all over the northeast, including the one in Trump tower in New York city itself. I want to read you a couple quotes from this article from the New York Daily News here.

Uh, on July 11th, the city department of Health inspectors found evidence of mice or live mice. Uh, the inspectors also deemed the restaurant not vermin proof. This was Trump tower on fifth avenue. Instead, it’s conditions are conducive to attracting vermin and allowing vermin to exist. The eateries, food contact surfaces had not been properly maintained and unacceptable material had been used to build some non food contact stations, making them practically impossible to clean. So what I can only assume is that they were just taking little bits and pieces of other things and using them to build workstations because Trump’s not Trump stopped buying them food prep tables. That’s the only thing I can assume from that. Uh, the Trump tower eatery has been written up for various health code violations every year since 2014, including sightings of live roaches in 2016 and filth flies fill flies in 2017 but inspectors have not until now found mice tracks at the posh establishment.

So in spite of the fact that these restaurants have been increasingly disgusting over the years, up to this point, they had not actually found evidence of live mice in the restaurant until now. There are live mice in Donald Trump’s restaurants. Mr Clean Freak himself isn’t actually keeping as restaurants clean and his two idiots sons clearly haven’t been paying attention. What’s important about this is, again, Trump is still the CEO of the Trump organization. These are his babies, not, not the mice, but I guess technically they would be at this point. But I’m talking about the restaurants. You know, it’s not just what you show on the surface, it’s also what’s underneath. You know, if anybody has ever watched one of those, got to go in and rescue a restaurant type TV shows, you know, Gordon Ramsay, uh, you know, uh, any of the ones on food network that they had. These are the kinds of things that make a real actual chef, business owner, restaurant owner want to vomit immediately.

But that is what’s happening every day at Trump’s restaurants. And that is what food inspectors, health inspectors repeatedly find. And it’s not just that, Ooh, this is gross. This is going to get people sick. You know, cross contamination of food products that leads to Salmonella can lead to Ecolab. It can lead to all sorts of illnesses for the people eating those foods. You know, the rats, they carry diseases, they carry fleas, they can carry ticks. This is a very serious problem and it shows you how serious Donald Trump is about being a great businessman. And it also is a very good analogy for Donald Trump himself. Always make sure everything looks its best on the outside, but on the inside it’s really just the pile of crap.