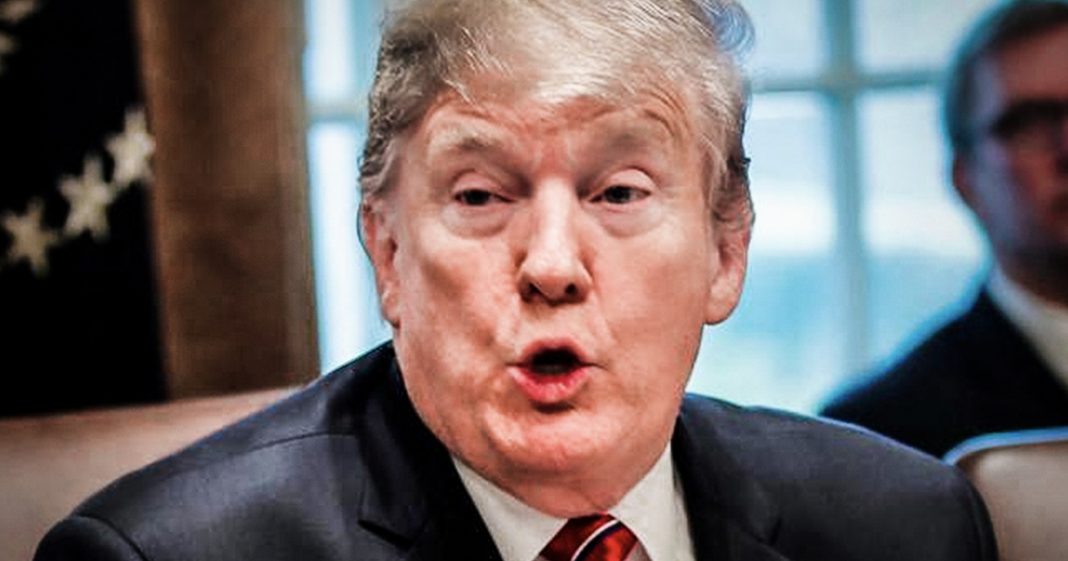 Donald Trump loves to tell us that China is being brought to its knees over his tariffs, but the truth is that American consumers are the ones paying the price. The costs of goods continues to go up, auto prices are about to spike thanks to steel tariffs, and American farmers are going bankrupt at a record pace. The trade war lies are similar to his lies about Mexico paying for his wall, and they all indicate that this man has no idea what he’s doing. Ring of Fire’s Farron Cousins discusses this.

Last sunday, Donald Trump tweeted out that trade talks with China. Well, we had a team of negotiators sent over to China and man, they are doing a great job. Here’s what he tweeted. Important meetings and calls on China trade deal and more. Today with my staff, big progress being made on so many different fronts. Our country has such fantastic potential for future growth and greatness on an even higher level now. He’s been telling us this for several months. Actually, the hay talks are going great with China. Everything with China is just going smooth and he’s also told us several times that China is feeling the squeeze from his tariffs and they want to make a deal. Here’s the truth. China’s doing okay. Yeah. Their economy is contracting a little bit right now, but that actually has nothing to do with Donald Trump’s tariffs. Do you know why? Because we, the citizens of the United States, the consumers are the ones who are paying the price for his trade war, not China Sea.

China’s not actually incurring any costs. This. They’re passing it along to us, which is why the prices of steel and aluminum have gone through the roof, which is why automakers announced recently that the price of new cars is about to skyrocket here in the United States by as much as two or $3,000 per new vehicle because of the cost of goods to make them car part. Manufacturers are feeling the squeeze, their orders have dried up, you know, gaskets, small little pieces and parts that you need for your cars. People can’t buy them now, or automakers can’t buy them in bulk because of the cost of the raw goods that have gone up as a result of Donald Trump’s trade wars. But it gets so much worse. This isn’t just about steel and aluminum and the price of your car or your beer can. What’s happening to American farmers as a result of Donald Trump’s trade wars is probably the worst bankruptcies among American farmers have hit a 10 year high, if not a high even longer than that.

For years. Bankruptcies are going through the roof in the Midwest in the areas that voted for Donald Trump. To put them in office reports are now starting to come out that some of these farmers are contemplating suicide because they don’t know what to do. They don’t see an end in sight to the trade war. They can’t sell their crops. The bailout that Donald Trump promised, the few who have gotten it, it has not been enough to help them and they don’t know how they’re going to go on. This is the only thing they know. It’s what their families have known for generations is what they were going to pass on to their kids. So they’re actually contemplating ending their lives because of Donald Trump’s trade wars. You know, typically you don’t have casualties in a trade war. So I guess we could maybe if it happens in God, I hope it doesn’t, but if it does, maybe that’ll be another feather in Donald Trump’s cap.

You know, the first trade war in history to ever have a body count. But that’s what’s happening. That’s what the reports are saying right now. People don’t know what to do. And meanwhile, Donald Trump is sitting there possibly sitting on his golden toilet tweeting out that things are great and that they’re about to get better and that China is on its knees. Nothing could be further from the truth. The only people suffering for this are the American consumers, the American farmers, the American automakers and auto buyers. We are the ones who are paying the price for Donald Trump’s trade wars and China. Given the fact that this has now been almost a year, they don’t seem to be in any hurry to make a deal with the expert negotiator that we have sitting in the White House. This just further proves that Donald Trump has no idea what he’s doing. You know his China’s feeling.

The squeeze is a lot like Mexico’s going to pay for the wall. Talking point. Neither are true, neither are based in reality and in the end it’s the American people that end up paying the price. Trump doesn’t know what he’s doing. He has no strategy. He has nobody intelligent around him to tell him how to do things and he’s just winging it and the longer he continues to wing it, the longer he sits in that White House, the more every single person in this country that isn’t a member of the wealthy elite is going to suffer.