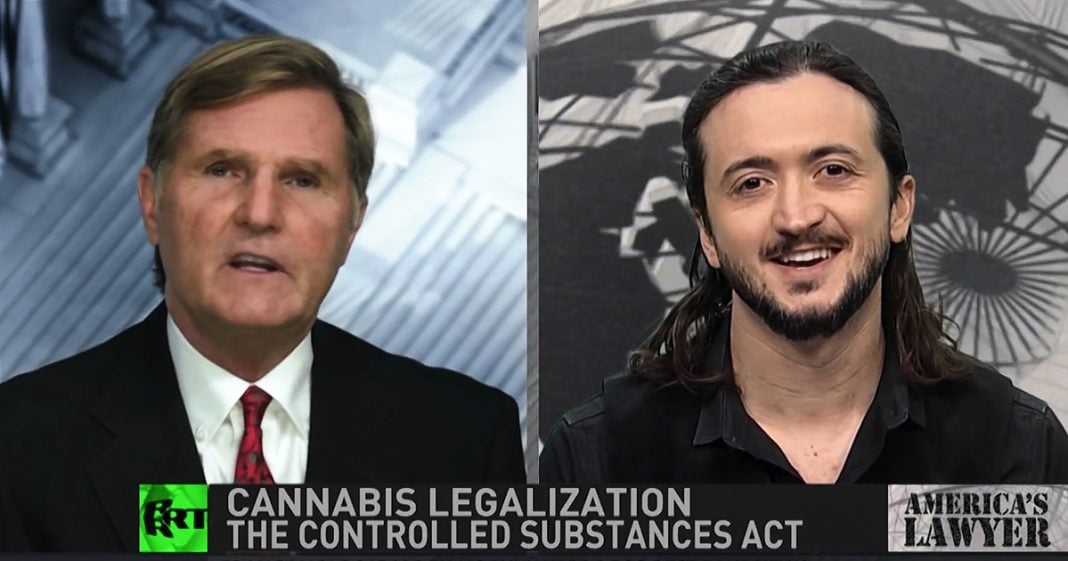 Via America’s Lawyer: Mike Papantonio has a discussion with Lee Camp on why lobbyists from the alcohol industry are working overtime as they consider whether the booming legalized marijuana business represents a competition or opportunity.

Mike Papantonio:             Getting cannabis off schedule 1 of the federal Controlled Substances Act is the biggest goal of the marijuana industry and a new bill in the House of Representatives would accomplish that goal by requiring cannabis to be regulated like alcohol instead of like heroin, which is another drug on schedule 1. And now alcohol lobbyists are getting involved as they consider whether the booming marijuana business represents competition or a business opportunity or maybe a hybrid of the two.

Joining me to talk about that now is Lee Camp, host of Redacted Tonight, here to talk about this story. Lee, I know you’ve done plenty of, plenty of pieces on this topic. This is kind of a new twist because in the past, really what we’ve seen is the alcohol industry, very afraid of the expanding market of, of marijuana. They understand it is a replacement of sorts, but now they realize they have a distribution system in place. They have the people, they’ve got the way to distribute all this. Tell me what, the alcohol industry lobbyists have stressed that they are neutral on the issue of legalizing marijuana. I don’t buy that. How about you?

Lee Camp:                              Well, first of all, I hope you didn’t just have me on for this topic because I have long hair, but I, I do think that they’re, they see the writing on the wall. I think for a long time they thought it was going to take away from alcohol sales and now they’re starting to see that yeah, they have the distribution set up. They have the money. They could really get in on this and make a lot of money from this. Of course the idea that we should be talking about weather or they actually should be talking about whether, you know, legalizing marijuana or decriminalizing it would hurt their alcohol sales when it has been the, the drug war has been the cause of so much harm to so many people around this nation.

You know, it shouldn’t really matter whether it hurts alcohol sales, but yeah, I think they see a big, a big dollar sign here and they’re excited to get in on it. I mean, even in terms of CBD oil, even Coca Cola has announced they’re going to, they’re looking into a soda with CBD oil and you know, I’m excited for that because that means soon there’ll be a, a soda that both can cause and cure cancer at the same time.

Mike Papantonio:             Yeah. Well there’s so many of the CBD is, is just a, it’s an emerging area where they’re finding new uses for it virtually every day. And oddly enough in this business, I don’t know if you’ve been following this, but the CBD business has been just as successful from a standpoint of sellability of the product, expansion of the product, as regular marijuana has been. And I really think that that’s where the, that’s where one of the bigger fights going to take place.

Look, many politicians now support cannabis legalization that will end the war on drugs, according to the talking points. How likely do you think it is that legislation would remove cannabis from the controlled substance act? I mean, what do you really think the possibilities are?

Lee Camp:                              Well, I think we’re going to see cannabis come off controlled substances pretty soon. I think that, you know, Americans in general aren’t falling for the, the, the propaganda anymore. That, oh my God, it’s going to rot your brains. And you know, they’re also seeing the health benefits of both marijuana and CBD oil. But will it be the end of the war on drugs? I’m highly doubtful of that. I mean this war on drugs from the beginning was created by the Nixon administration to undermine and up end black communities and activist communities and, and former Nixon aide Ehrlichman, John Ehrlichman has, has said that outright that they knew that would be the cause of this.

And, and this is too useful to kind of the ruling elite to have a drug war, a system that puts everybody in, you know, it puts everybody in the poor lower class in prison or someone in their family, someone in their community and it upends their lives. It makes it so they cannot, they can’t vote for one thing, a lot of them depending on the state. And it’s very useful to them to be able to lock people up to like this.

Mike Papantonio:             You’d be glad to know that our new attorney general Barr actually wrote a paper one time on how we need to lock up more people. That we’re letting too many people go. He was one of the people that actually increased this jail time for, for minor drug users. Lee, it’s not all good news for the marijuana industry as there’s also been an increase recently in the scary weed narrative that we’re seeing. Talk about that, you know, the whole, the whole idea of scary weed leads to the next, leads to the next, leads to the next. What’s your take?

Lee Camp:                              Yeah. These, these articles are popping up again. You know, I thought we were past those times, but even Mother Jones known for being a kind of liberal outlet, even they had an article recently that was about how it didn’t, you know, studies show it destroys your brain or whatever. And, and my guess is, you know, as we said earlier, I think the alcohol industry sees that they can make money from this, but I think Big Pharma is probably the ones though, those lobbyists are probably the ones that still very much fear marijuana and CBD because it, it, the, those studies have shown that people will get off more dangerous, more expensive drugs if they find that a cannabis can solve their problems, whether that’s pain or whatnot.

Mike Papantonio:             We’re seeing more and more that. Lee camp, honestly, one of the most insightful and funny political commentators on the air without question. Thank you for joining me Lee. Okay.