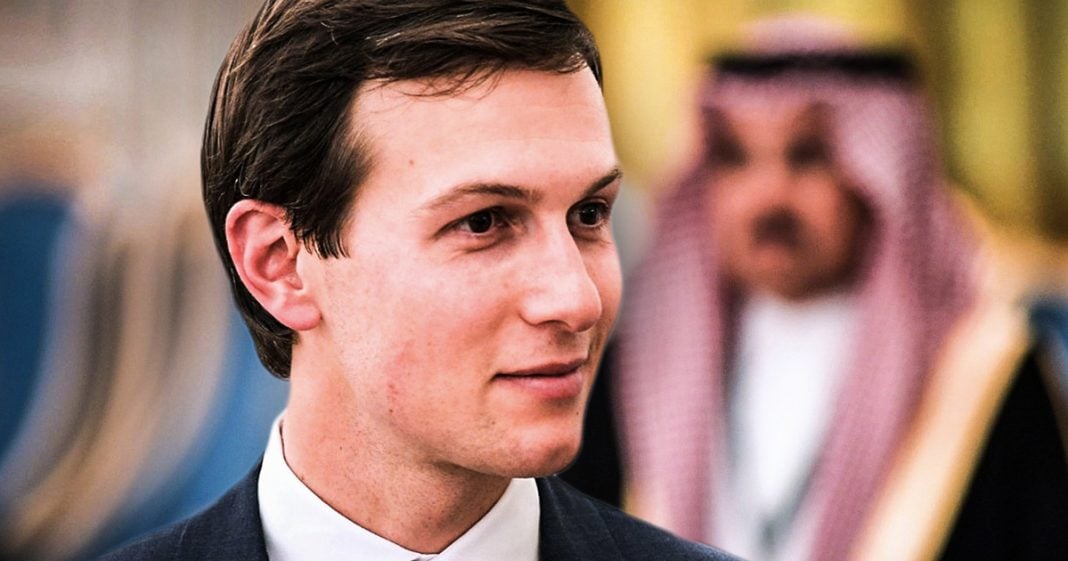 With all of the disgusting news that has emerged in recent weeks about Saudi Arabia, it should come as a shock that the US is still reaching out to them as if they are our greatest allies. It SHOULD come as a shock, but it doesn’t. Jared Kushner is headed to meet with Middle Eastern leaders and his first visit will be with the Saudi royal family to discuss his super top secret “Peace Plan.” Ring of Fire’s Farron Cousins explains what’s happening.

Jared Kushner, these son-in-law of Donald Trump, which appears to be the only qualification he has to even serve in the White House, is currently in Warsaw, Poland, trying to convince leaders in Europe at a Middle East security conference that they need to join into this super secret plan that Jared Kushner is come up with to secure peace in the Middle East. Now, according to the White House and Kushner and all of the diplomats present at this meeting, uh, they’re not allowed to see what’s in Jared Kushner super secret, Middle East peace plan. They have not released it. They are not going to release it because you know, they’re trying to wait, I guess they said they don’t want to release it before the elections in April and Israel and so nobody can know what’s in it or what the plan actually is, but they want everybody to go ahead and just blindly say, okay, Jared Kushner, the Middle East security expert.

We’re going to sign onto your plan, not knowing at all what it is, and then you go achieve something that nobody else has been able to achieve, which is peace in the Middle East. But on Jared Kushner is little a trip here to Poland and then later he’s going to spend the last half of the month going through the Middle East, hopefully spreading peace, which I guess is his agenda now, but what he’s really doing and what he is going to do in Poland, the first stop is to meet with the Saudi royal family. Make sure everything’s cool with them. You know, you just murdered that journalist and we just want to make sure everything’s cool with you. You know, uh, that you’re okay with this, that you’re handling it and you’re not too stressed out by the fact that you killed a man with a bone saw and then hit his body and then lied about it.

And we’re not going to punish you at all. Also, a hasn’t come in on those nuclear agreements. Jared, you work it with Saudi on that to sell them the nuclear technology for reactors and plants that they will actually never build because there are fossil fuel rich country. Is that, is that one of the things you’re going to talk to them about or could it be that you’re gonna continue to try to seal the deal for Trump properties or even Jared Kushner properties that you would like to start building in the Middle East? Because I’m going to go with that one. That is what this has always been about. It’s what Jared Kushner and Erik Prince were working on prior to the election with leaders from the Middle East and that secret little meeting they had. That’s what Jared Kushner is about. That’s what this plan is about. This plan that, again, nobody can see is all about opening up investment opportunities for members of the Trump and Kushner families.

That’s what their goal is and if they accidentally create a little bit of piece hopefully for them in the areas where they want to build their hotels, are there high rises or their apartment buildings, then I guess that’s just a side effect, a consequence really of their actions because it’s never their goal. First and foremost, Jared Kushner is too stupid to be able to develop an actual plan to bring peace to the Middle East when we have had actually very intelligent people work on this issue and unfortunately come up short. Part of the plan here is that they are going to tell Palestine that they need to just back off Israel and give Israel whatever they want. We know that because Benjamin Netanyahu is one of the strongest supporters of this plan again, that he’s never even seen, but he knows where this administration stance, Saudi Arabia and the United Arab Emirates are also trying to get people.

Go ahead. Just sign onto this plan really quick. You know you don’t need to see what’s in it totally secret, but just go ahead and sign it so we can get the ball rolling here. Something is going on. Jared Kushner has had too many secret meetings with aggressors in the Middle East. For him to actually be serious about considering bringing peace to these areas with these horrible people that he is working with. There is something bigger at play here and my money is that Jared Kushner sees this as an investment opportunity and not as an actual chance to bring peace to the Middle East.