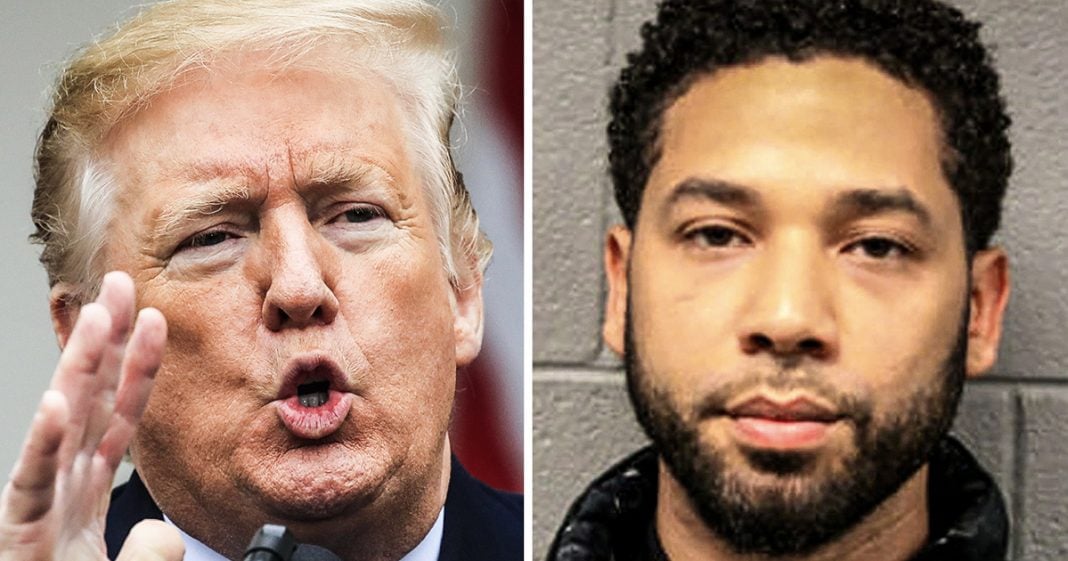 The number of hate crimes being committed in the United States has taken a dramatically sharp upward turn since Donald Trump came into office, and just this week it was announced that a Coast Guard member was arrested for plotting to kill prominent journalists and Democratic politicians. This story has unfortunately been buried under the avalanche of news surrounding Jussie Smollett’s faked attack. Ring of Fire’s Farron Cousins discusses this.

Two major events occurred this week that have essentially been buried by the news cycle all because of Jussie Smollett. The two big events, the first one being the new report from the southern poverty law center that shows that for the fourth year in a row, the number of hate groups here in the United States has continued to increase and the SPLC linked that increase directly to the hateful rhetoric and policies coming out of Donald Trump and his administration. The second event is that a coast guard lieutenant by the name of, uh, Christopher Hassan had plotted a white national terrorist attack here in the United States. He had been stockpiling guns and Ammo for a very long time. He had an enemies list of people he was going to kill and they all happen to be enemies of Donald Trump. Both members of the media and sitting members of Congress, including Nancy Polosi, Elizabeth Warren, and Alexandria Ocasio-Cortez among countless others.

Those were just some of the people on his list to kill. He had also googled, uh, where is best placed in DC to see members of Congress were in DC. Do members of Congress live his Google history shows that he was in the final planning stages of his attack and that he was ready to kill as many people as possible. The likes of which in terms of a mass murder in the United States, prosecutors say we have never ever seen. And he was doing it to support Donald Trump. He wanted to take out Donald Trump’s political enemies. And again, this story which Trump as of right this second has not yet even tweeted about story has been buried because of Jesse Smollett. He faked the attack. He faked that attack on the frozen streets of Chicago just to further his career. Now don’t get me wrong, that was a big deal and had it not been sub freezing temperatures in Chicago when it happened, he likely could have started a race riot as Mike Papantonio pointed out the other day.

So it is a big deal, but it sure as hell isn’t the biggest deal. And more importantly, it doesn’t mean that real acts of hate aren’t occurring in this country on a near daily basis. And that’s the part that Republicans don’t seem to understand. Jussie Smollett. It is a liar. The media did fail in their initial coverage of this event, which didn’t even happen, but they’ve done a decent job since then of trying to, right. They’re wrong by condemning him, but unfortunately in their efforts to right the wrong, they’ve over focused on it and ignored these real stories that people need to know about. A man, a member of the coast guard wanted to murder members of Congress in order to impress Donald Trump. Trump has inspired more hate here in the United States, and one falsified attack by an actor who was trying to save his career does not negate the hundreds of other attacks that we’re seeing every single year.