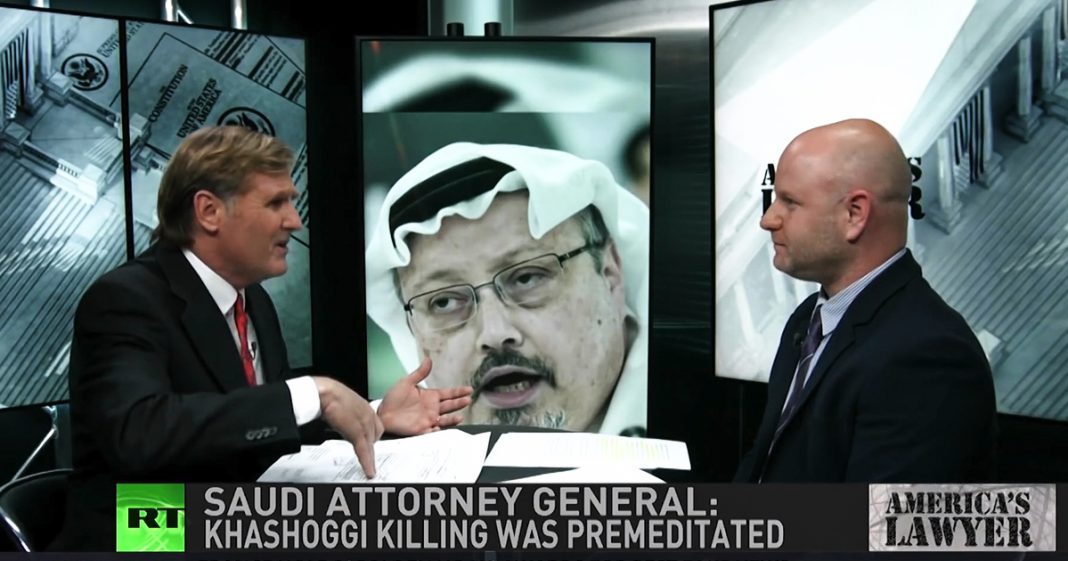 Via America’s Lawyer: UN investigators have concluded that not only did the Saudi Arabia’s leadership have journalist Jamal Khashoggi killed, but that the murder was premeditated. Mike Papantonio and Trial Magazine Executive Editor Farron Cousins discuss.

Mike Papantonio:             UN investigators have concluded that not only did the Saudi Arabia’s leadership have journalist Jamal Khashoggi killed, but that the murder was premeditated. I mean, as I look at this story, it’s Saudi Arabia, Saudi Arabia, Saudi Arabia, and we’re out here talking about China and Russia, and Venezuela. These, these folks had him murdered. They had him dismembered. First of all, they suffocated him. Okay. Then they dismembered his body. And here’s where it really gets interesting.

Saudi Arabia is saying, oh no, we’re taking care of the people who did this. Really, really? Because leadership at, the Saudi leadership did this. It wasn’t somebody operating out of without rules. So there’s, they have the secret trial going on. They say, we got 11 people that were prosecuting. What is your take? That helped this guy, they helped the people who murdered this journalist escape.

Farron Cousins:                  Yeah, and that’s what the UN found. They said this was a, an almost year long operation to just set this up to murder this one man. They had the body double that wore his clothes out of the embassy to make people think that Jamal Khashoggi was okay and that he was just leaving. They got these people in, they got them trained, they snuck them out immediately after the murder took place and the UN says, listen, this was coming from the crown prince.

This goes to the top. We know this. The evidence is clear. And then Turkey, where he was murdered they’re trying to get these 11 Saudis extradited over there and Saudi Arabia, as you said, says, no, no, no, no, we’re, we’re handling this in our own secret trial that nobody can know anything about.

I mean, if you take a look at who we’re going after, who we’re saying are the bad guys around the globe and we’re ignoring Saudi Arabia. I mean this is a royal family that was involved with planning 9/11 for God’s sakes. And so we still, we, we see what they did here. You know, if it had been anybody else, oh my gosh, we would’ve had sanctions, we’d have embargoes, we would have done all the things we should do, but not here.

Farron Cousins:                  Right. And you know, you just brought up a really interesting point. All the people that we’re saying right now are the enemies, Iran, Venezuela, those are enemies of Saudi Arabia, not enemies of the United States. And that helps paint a clearer picture of what’s going on here. And it is disgusting that we continue to suck up to the royal family over there in Saudi Arabia. You know, leaders for the last 20 years, you know, they, they kiss the ring, they put their hands on the little orb or whatever it is, it’s sickening.

Mike Papantonio:             let me put something else. Our greatest ally over there is Israel. Okay. They are our greatest ally. And you know what, all these anti Israel kind of nuts that are out there right now have better kind of take a look at history and they need to understand that Saudi Arabia, if we didn’t have some involvement and to be able to hold, would blow Israel off the map. There’s just no question in my mind. So it’s this detente that exists.

So I guess from a positive standpoint, if I’m to look at the positive side of it is for us to have this control, this, this, detente kind of relationship with Saudi Arabia in that, you know, in, in the mixture of Israel. Maybe that’s part of it. And that’s important. That’s extremely important because I really do believe that they would, they would dust Israel tomorrow. But I, by the way, what is your take on this, on this issue that’s developing about this anti Israel kind of thing that’s happening, interestingly enough with progressive’s?

Farron Cousins:                  Well, I think a lot of it has to do with the fact that, you know, the, the leadership in Israel isn’t necessarily, you know, maybe not horror. It’s almost like a Venezuela situation to be honest. The people are the ones who are suffering under bad leadership. Maybe they mean well, maybe they don’t, but we’re just in this tough situation where we as a country still don’t know how to handle it. And that’s our problem is that we rush into these areas.

Mike Papantonio:             Yeah, well we need to start, we just need to reevaluate this polarity that’s developing with certain countries like Saudi Arabia and that really to hear discussion and, well gee, we need to abandon Israel or Israel somehow the bad guy here, very problematic to me. Thanks for joining me. Okay.