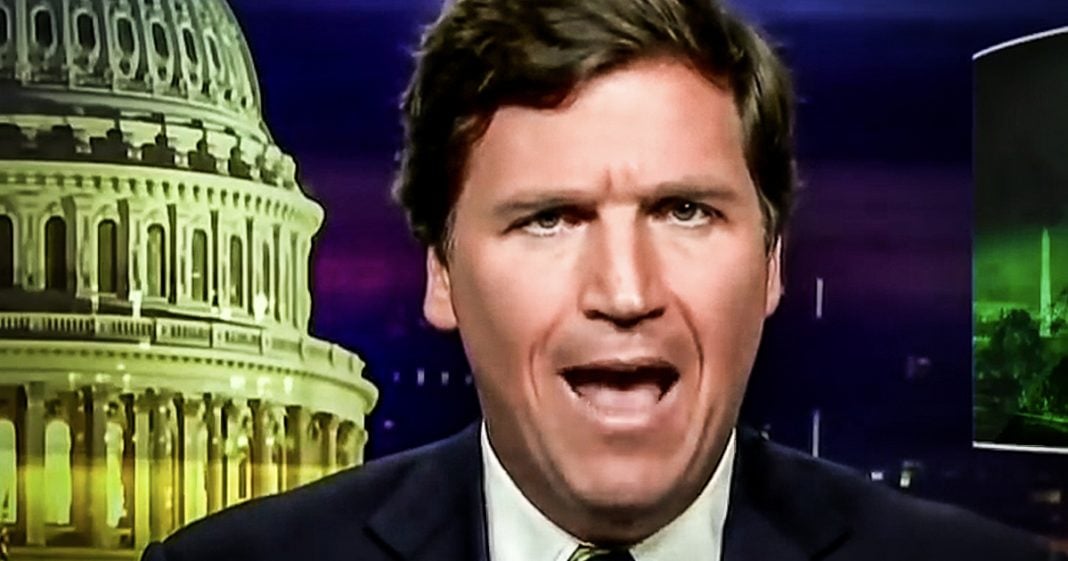 Tucker Carlson grew irate recently after a guest that he invited on his program ended up blindsiding him by pointing out his own hypocrisy, and the hypocrisy of Fox News. Carlson thought that the guest was going to be attacking “limousine liberals” and instead got a dose of his own medicine. The guest, Dutch historian Rutger Bregman, came armed with facts, and Tucker went into a profane shouting fit after the guest called him out. Ring of Fire’s Farron Cousins discusses this.

Recently, Tucker Carlson invited Dutch historian Rutger Bregman on his program because Bregman went to Davos recently and told the wealthy elite that one, they need to be paying more in taxes. But he also called the out for jetting around in private jets and still talking about climate change and thought that was pretty hypocritical, which he’s correct. So taco Carlson actually invited him on his program to talk about that specific thing, you know, calling out the hypocrisy of these so-called limousine liberals. But Bregman really didn’t want to focus on that and he wanted to focus on the tax issue. And Man, Tucker Carlson wasn’t having it. The segment never ended up airing, but a Bregman or, or one of his, uh, friends or whoever was with him in the studio did manage to take a cell phone video of the exchange between Bregman and Carlson. And now this released the video yesterday. So, so here’s a quick snippet of Tucker Carlson’s total meltdown after Bregman called him out.

I mean, you are a millionaire funded by billionaires. That’s what you are. And I’m glad you know, finally join the bandwagon. You know, people like Bernie Sanders and AUC, but you’re not, you’re not part of the solution. Uh, Mr and Mr. Carlson, you’re part of the problem. Actually,

can I just say

It doesn’t even play more. You are,

it doesn’t play where you are. Well, have you heard of the Internet? I can watch the things, whatever I want. I have actually, I can’t say I’m a great fan of your show, but I do my homework when you invite me on your show.

So I mean, you’re probably not going to air this, but I went to devos to speak truth to power and I’m doing exactly the same thing right now. You might not like it, but your a millionaire funded by billionaires and that’s the reason why you’re not talking about these issues.

Oh, what I am talking with you.

Yeah. I only now C’mon, you jumped a bandwagon. You’re all like, oh, I’m against the globalist. The Blah, blah, blah. It’s not very convincing to be honest. Yeah.

Why don’t you go carousel tiny brain and I hope this gets picked up and you’re a moron. I tried to give you a hearing boy,

you can’t handle the criticism Kenya.

All right, so there’s a little glimpse into what Tucker Carlson is actually like when he brings on a guest that kind of does the same thing that Tucker likes to do and just kind of ambush somebody with a different topic. It’s actually very frequent tactic on Fox News, but you also don’t see people going on Fox News who are willing to go after Fox News, but that is exactly what Bregman did and he was 100% correct in his analysis of the network. You have a bunch of millionaires being funded by billionaires to tell working class people that we need tax cuts. That is exactly what happens on Fox News and it happens on the other networks as well. And that is what Bregman was trying to talk about. You know, talking about the historical significance of having a high marginal tax rate and how the U s economy actually did much better when we had those.

And the fact that Carlson got called out for it, that his network, that his bosses got called out for it. That’s what really set Tucker Carlson off because Bregman helped to expose what’s actually happening at that network. And again, the, the real joy in this is the fact that Carlson thought he was bringing on this guest to sit there and trash the hypocrisy of wealthy limousine liberals. Something Fox has been doing for quite some time now. But instead the conversation shifted to the entire class of wealthy elite and their hypocrisy and the fact that their refusal to pay taxes is helping to cripple theU s economy.