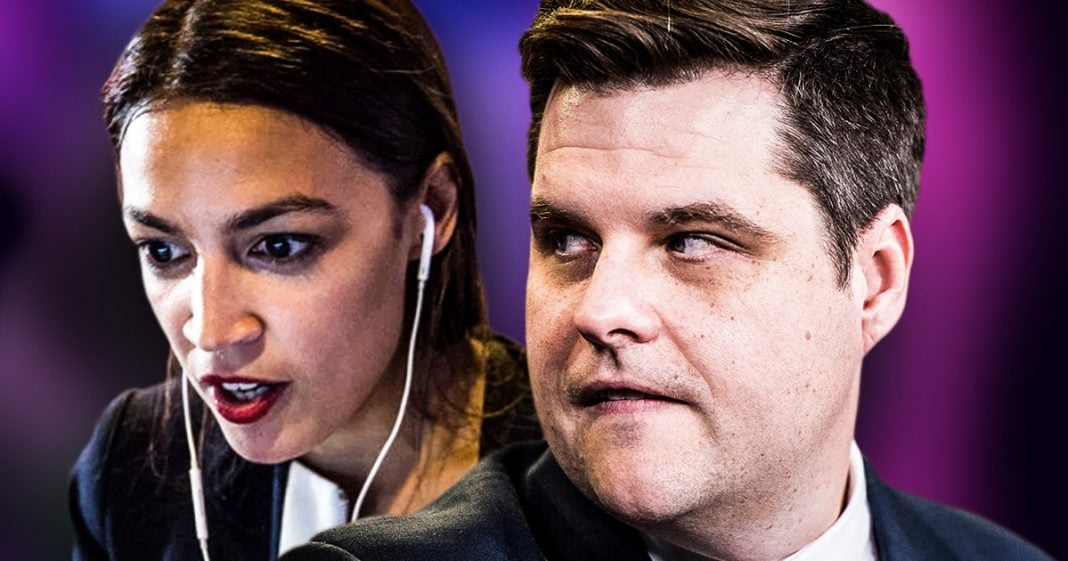 Republican Congressman Matt Gaetz has been slammed by a Florida reporter for his weird lusting after Alexandria Ocasio-Cortez. While Gaetz has offered his fair share of baseless criticism like other Republicans, what sets Gaetz apart are his creepy innuendos and constant comments about how attractive she is. Ring of Fire’s Farron Cousins discusses this.

For months now, Republicans had been making a lot of comments about Alexandria Ocozzio Cortez, you know, they said that AOC, she’s not very bright. You know, she’s got these pie in the sky dream. She’s just promising everybody free stuff, all of which are lies by the way. But those are, you know, comments that she has very quickly and easily refuted, uh, both through speeches and on her social media accounts. But there’s other comments being made that have hit a new level of creepy. And one of the people leading the charge with these creepy comments happens to be, unfortunately, my congressmen, Republican Matt Gaetz, and this has not gone unnoticed this week. A, uh, Miami New Times columnist Gerry, I Anneli actually called Gaetz out for what he describes as his thirst for AOC. Here’s what I Anneli has to say about Matt Gaetz. And he pro provide some examples to show the creepiness that he’s had when he talks about her, says Gaetz quotes include repeated statements that he finds her attractive.

He’s called her adorable and in a reference to the Tinder app, uh, the dating app. Tinder is, he’s me. He even creepily told TMZ this month that he’d swipe right on the idea of working across the aisle with her in a daily caller interview last Thursday. He alternated between insulting her intelligence and complimenting her, uh, and he wants again, felt the need to comment on Ocasio-Cortez looks by referring to her as an attractive lady from Queens as INL. He points out in his column, this is akin to stalker like behavior. Matt Gaetz cannot seem to stop talking about how attractive he finds Alexandria Ocasio-Cortez. She is just so damn cute. She’s dumb as a brick according to Gaetz. But Damn, she fine. Yeah, that’s not appropriate for a sitting member of Congress. But what it does for me, first of all, she is incredibly intelligent. She is kicking ass up on Capitol Hill.

She is changing the way it works up there. What she has done is phenomenal. Compare that to what Matt Gaetz has done. He’s only been in Congress two years longer than AOC. Uh, he’s proven that we, down here in my district, we’re not the smartest bunch cause we’ve elected him twice now. Um, he’s wanted to abolish the EPA. That was actually one of the first things he tried to do. Uh, he has become a Donald Trump suck up the likes of which would make even Lindsay Graham blush and he just overall is a complete no nothing. Who only wants to be famous by putting his stupid face on our TVs as frequently as possible. Say AOC is actually doing stuff. She’s getting stuff done. Matt Gaetz has accomplished nothing and that’s why he’s terrified her. But at the same time he can’t help but feel a little bit attracted to her.

And that’s where things get creepy because to me, what this suggests, obviously people don’t say everything out in the open. You get a more filtered version of that person. So if he’s willing to be this creepy towards her in public, how creepy is he being with his staff? Are any of the women on his staff getting the same kind of treatment? Is he making the same comments about other members of Congress? Those are questions that I would like answers to and I would encourage anyone who has those answers, please reach out to us and let us know because if this behavior is going on behind the scenes, and it’s worse than what we’re seeing in public, this is something that everybody in the country, especially those of us down here in his district, really need to know about.