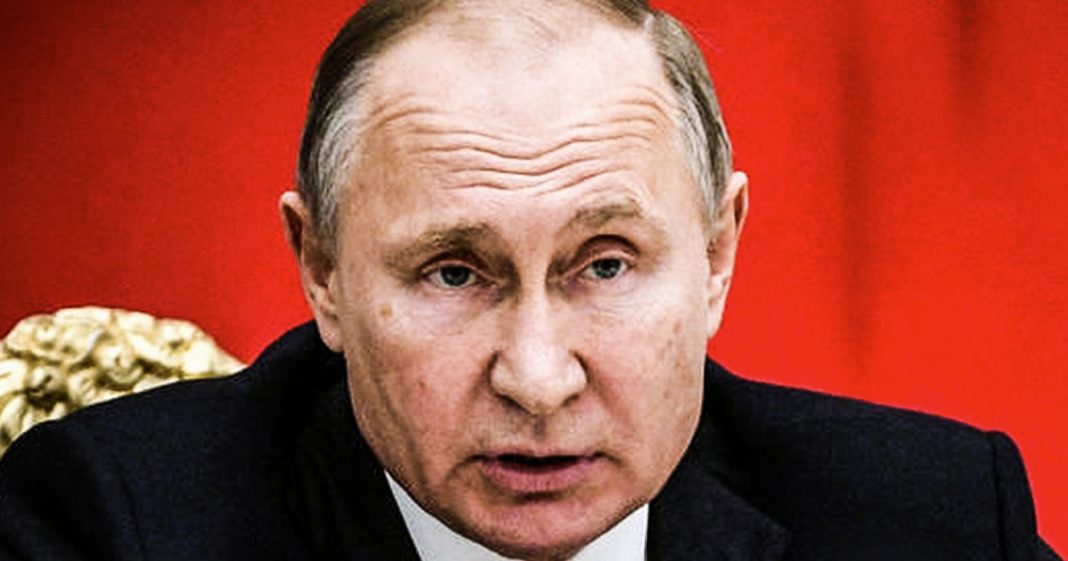 Vladimir Putin announced this week that he would match any efforts by the United States to place nuclear weapons closer to his country by moving nukes closer to the US. This is in response to Trump’s decision to destroy the Intermediate-range Nuclear Forces Treaty that had prevented nuclear buildup between the two countries and effectively helped to end the cold war. And now, thanks to Trump’s stupidity, we’re back where we started. Ring of Fire’s Farron Cousins discusses this.

Recently, as we all know, Donald Trump pulled the United States out of the inf treaty that we had with Russia, uh, which was the intermediate range nuclear forces treaty. It basically helped to end the Cold War, the signing of it, and it said, listen, we’re not going to create these intermediate range nuclear missiles to hit your country from, you know, a little bit further away than what we could do now. And Russia said, okay, that sounds good. We won’t do it either. That’s the gist of this treaty. You know, we’re not going to make these intermediate to long range nuclear missiles so that we can hit you with a nuke from the comfort of our own home. Trump pulled us out of that very weirdly and a lot of people were saying, well, this is a gift of Bladimir Putin. And as I said from the beginning, no it’s not.

This is a gift to the defense industry. But the reason I’m bringing this back up again is because yesterday Vladimir Putin announced that any effort by the United States to move nuclear weapons closer to Russia is going to be met with a similar response from Russia itself. So if we move nukes closer to Russia, Russia’s going to move nukes closer to the United States. If we get closer to that, they’re going to get closer than that. We have once again entered this new Cold War, uh, you know, reminiscent of the Cuban missile crisis, which this is exactly what happened during the Cuban missile crisis. And it’s all because of Donald Trump pulling us out of this treaty for no real reason whatsoever. Now, the State Department claims that rush had been violating it, they’d been violating it. Unfortunately, they were not able to offer any concrete evidence to prove that Russia was violating this treaty.

And let’s keep in mind, you know, same State Department, different players for the most part, some of the old players are still there, but it’s the same State Department that swore up and down that Saddam Hussein was creating weapons of mass destruction, that he had those aluminum tubes in the yellow cake. I’m sure we all remember those talking points that turned out to be completely false and now we’re supposed to trust those same people to tell us that know Russia was violating a treaty. So we’re pulling out of it and now Russia says, okay, well you’re going to end up putting nukes closer to us, so we’re going to put some nukes closer to you. Once again, going back to the height of the Cold War and it is 100% because of Donald Trump’s stupidity. Vladimir Putin is a lot of things, but one thing, he is not his stupid. Donald Trump has a lot of things and on the top of that list is stupid.

Vladimir Putin has said he has no intention of striking the U s first because he understands what that would mean if he were to hit us with a new key, knows he’s going to get 10 more fired right back at him. He is not an idiot, you know, not a great leader. There’s a lot of a questionable deaths that have happened from high ranking officials and journalists. The hands of the Russian government. I’m not making any excuses for them. They’re really not that great. They’re not good people, but they’re also not idiots. Trump is, Trump’s the kind of guy who, as we’ve seen from reports, is more than willing to launch a nuclear first strike. So what’s going to happen when he finally gets pissed off and decides to do that? This is not going to end well, and this is what you get when you elect a president who has no idea how to be a statesman, no idea how to actually negotiate with other countries in is relying on the same faulty intelligence officials who helped lie us into the Iraq war.