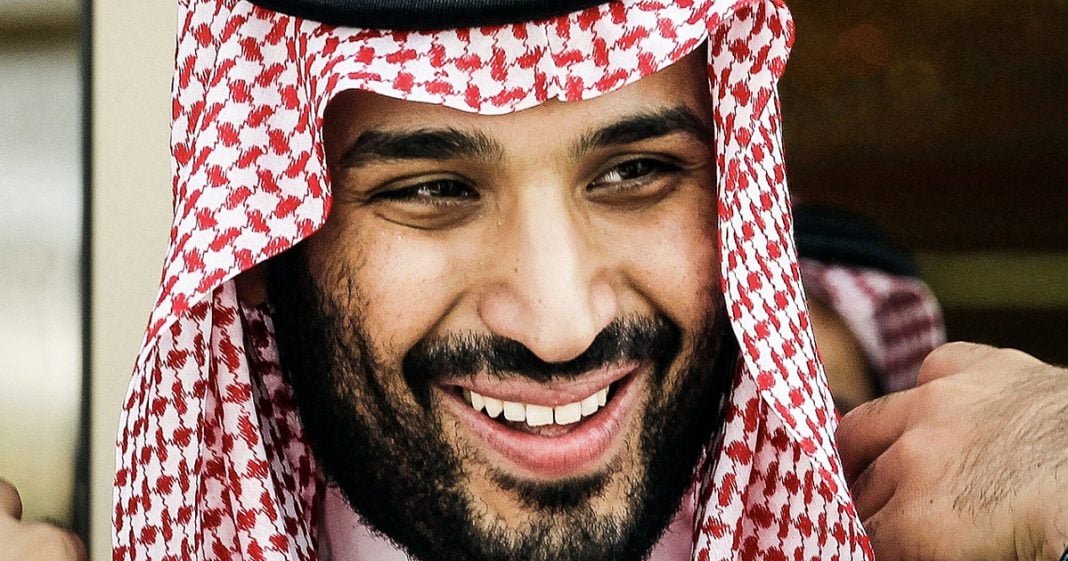 According to the House Oversight Committee, several top Trump aides and advisors wanted to sell nuclear secrets and technology to Saudi Arabia, one of the biggest aggressors in the Middle East. The idea of a nuclear Saudi Arabia is terrifying, but the Trump administration thought that giving them the most powerful weapons ever designed could have been a great opportunity. Ring of Fire’s Farron Cousins discusses this.

Just when you thought the United StatesStates’ relationship with Saudi Arabia could not get any more disgusting. We had a new major story break on Tuesday of this week, a courtesy actually of the House Committee on oversight and reform. Uh, that said, hey, the Trump administration, as recently as last week, has been attempting to sell nuclear secrets and nuclear technology to Saudi Arabia. Now, this deal that they have been working on has been happening since the beginning of the Trump administration. Shortly after he was sworn in, it was originally led by Mike Flynn. Donald Trump’s first national security advisor and a Flynn was trying to direct the administration to sell Saudi Arabia, all of the tech and all of the secrets that we had to offer because according to Flenn, Saudi Arabia wanted nuclear power plants and we should help them out. Then after Flynn left this deal, this idea continued and again was happening as recently as last week.

And we know that because plenty of whistleblowers have come forward to raise their concerns about what this administration is doing. That is what the letter from Elijah Cummings, the uh, chairman of the House oversight committee. That’s what he said in his letter. Other reports have also confirmed this. We know that this is happening. We know that this is part of the plan. And in the meeting last week, you had Rick Perry, you had a national security advisers and you had about a dozen CEOs from the nuclear energy industry. They’re helping to push this. In fact, Michael Flynn, back when he was with the Trump administration, had formerly been an advisor for one of these nuclear power company. So there was a big conflict of interest there that, uh, the whistleblowers were very concerned about. But they’re also concerned about the fact that this deal would violate federal law against selling nuclear technology and secrets, even if it’s to a foreign country that we wrongly consider to be our ally.

We’re not legally allowed to do this, but the administration argues, hey, we got to do this before Russia or somebody else, or China sells them nuclear secrets. And then they get on Saudi Arabia good side, and then we’re suddenly the bad guys. We’re just trying to get a jump on the thing so that we can stay there. Super best friends forever. Now the biggest question I have actually take it back even further. The first thing I thought when I saw this story and read this headline is I guarantee you Jared Kushner is somehow involved in this. I guarantee you, because of all of the stories we have heard about Jared Cushner going to the Middle East, being buddy buddy with Saudi Arabia working with Erik Prince and those little secret meetings. That to me is where I think the real collusion took place and then sure enough this massive report comes out and let me read you this.

The report released Tuesday notes that one of the power plant manufacturers that could benefit from a nuclear deal deal. Westinghouse electric is a subsidiary of Brookfield asset management. The company that has provided financial relief to the family of Jared Cushner, the president’s son in law and a senior White House advisor. Brookfield asset management took a 99 year lease on the cushion or families deeply indebted New York City property at six six six fifth avenue. Cushner is preparing for a trip to the Middle East to discuss the economic component of his Middle East peace initiative. According to the report, a lawyer for Cushner did not respond for a request for comment. So there it is. There is the Cushner connection that we all already assumed was there and yeah, one of the companies that’s going to benefit from selling the biggest aggressor in the Middle East nuclear technology is right there bailing Jared Cushner out and now he’s trying to bail them out as well and also help his buddies in Saudi Arabia.

But let me ask you this question. Why does a country like Saudi Arabia that is rich and fossil fuels, I mean that is literally what that country is all about, fossil fuels, why are they suddenly interested in nuclear technology? Because according to the administration, this is only for nuclear power plants, not for nuclear weapons, but why? Why would they need nuclear power plants? They love their fossil fuels. They have plenty of it. They’re not in any kind of energy shortage. They’re not concerned about climate change. They don’t want a greener, cleaner environment over there in Saudi Arabia. That’s absolute nonsense. There is zero part of me and in fact zero part of the national security advisors in the White House who believe that Saudi Arabia wants this technology so that they can switch over to nuclear power. That’s not what that country is about. What that country is about is selling weapons to other countries to kill people. That’s what they do. They kill their political enemies. The UN report from last week told us that with Jamal, Catia, shaggy, we know exactly what this country about and we know exactly why they would want this nuclear technology and I can promise you it has nothing to do with building nuclear power plants.