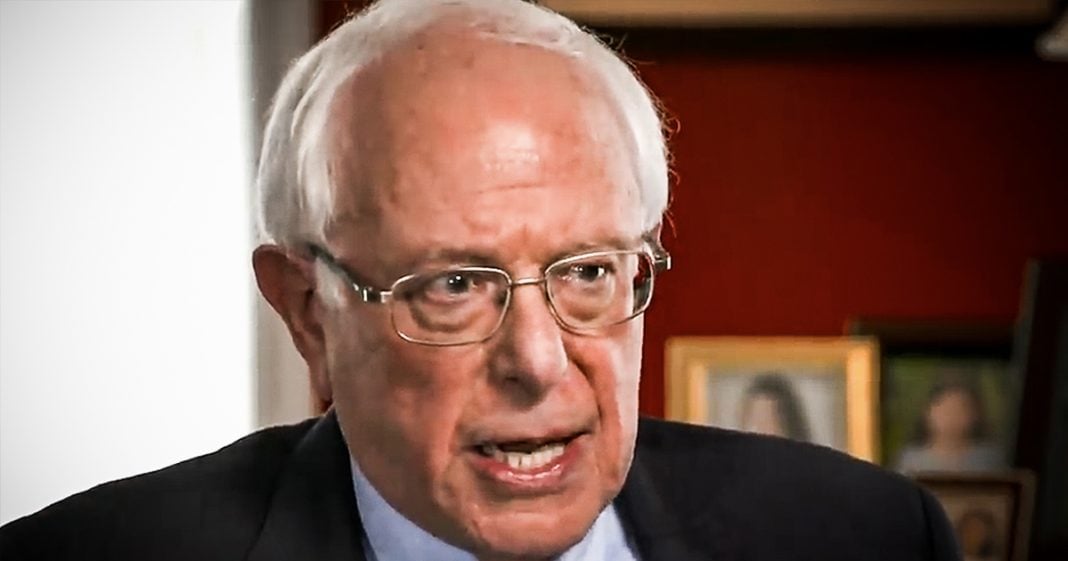 During his interview with CBS This Morning where he announced he plans to run for President, Bernie Sanders also took a shot at the media for their obsession with former Starbucks CEO Howard Schultz. Sanders said that the media is only giving him a platform because the guy is a billionaire, but that he really has no substance whatsoever to offer on the issues. Ring of Fire’s Farron Cousins explains why Bernie is 100% correct in his analysis.

Yesterday on CBS this morning, Bernie Sanders announced that he is running for president of the United States. But everybody already knew that, right? We, we knew that he made the announcement. We saw that he raised over $4 million in a single day. And we know that a lot of people are excited. There’s also a lot of establishment types that are super pissed off that he’s running. But nonetheless, in his interview on CBS this morning, he did something that I had been waiting for any candidate to do and it was absolutely phenomenal to see somebody called a media out like this and what he did. And we’ll show you the clip. And just a second, he called out the media for their obsession with billionaire, former Starbucks CEO Howard Schultz. Take a look.

He would not run as an independent if the Democrats moderate, uh,

nice. But you raise a good thing. Why is, how would Schultz on every television solution in this country? Why are you quoting Howard Schultz? Because he was a billionaire. All right. There are a lot of people I know personally who work hard for a living and make 40 $50,000 a year. We know a lot more about politics than role do respect us, Mr. Schultz, but because we have a corrupt political system, anybody who was a billionaire who can throw a lot of TV ads on television suddenly becomes very, very credible. So what Mr Schultz, what is he blackmailing the Democratic Party? If you don’t nominate Bernie Sanders, he’s locking to run. Well, I don’t think we should succumb to that kind of blackmail.

The other reason is that he represents an argument that some people make, which is if you’re worried about Donald Trump, the democratic party to win voters in various parts of the country needs to pick somebody who is

not so radical. That’s also what his theory rail, I think is deeper theory is, Hey, I’m a billionaire. Leave me alone and let me make as much money as I can without paying my fair share of taxes and let me continue to have undue political fluids, which you weren’t putting me. All right, here’s a billion or no one’s ever heard of this guy or not many people have you used the billionaire is thinking of running for president. Something is a very famous guy that’s, that is a problem with our political system.

Everything that Sanders said in that clip is 100% accurate. The media is absolutely obsessed with Howard Schultz and why as Bernie says, the guy has no policy experience. He doesn’t know what he’s doing. All he does is have a lot of money in the bank and so the network’s eat it up like, oh, you’ve got a lot of money. You must have a lot to say, oh, you have a lot of money. You must be super intelligent and we should give you a fricking town hall in primetime like CNN did and they’re only doing it because he has money. He has nothing of value to say. He has nothing of substance to say. He has nothing to add to the political discourse here in the United States. He just doesn’t want his taxes to go up. And Bernie Sanders was 100% correct to call him out on that and to call out the media for their disgusting obsession with this guy who hasn’t even said he is officially running for president yet, but the coverage that he is God and has been absolutely horrendous.

Nobody cares about Howard Schultz out here in the public. It’s the corporate media that continues to try to stuff him down our throats. And I don’t know how many more bad poll numbers need to come out before these corporate media networks get the message that we, the American public, do not like and do not want him to run. We don’t want to ever see Howard Schultz on our TVs again. He’s only been around for a few weeks and we’re absolutely sick of him. That’s the message that the media needs to receive. They need to stop pushing Howard Schultz, stop giving him a platform because he has nothing to say. He’s just another greedy billionaire that doesn’t want to have to pay a little bit more in taxes.