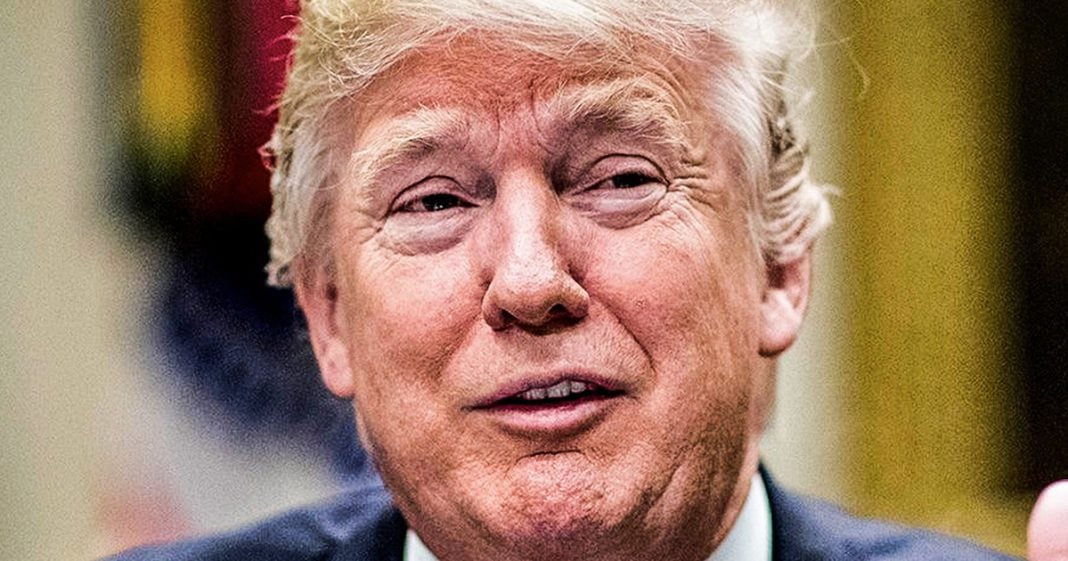 Donald Trump knows that he can’t beat Democrats on policy issues in 2020, so instead, staffers at the White House say that the President is busy testing out new nicknames for all of the 2020 Democratic candidates. This might be one of the most juvenile acts that we’ve seen from this president, but it isn’t the least bit surprising. Ring of Fire’s Farron Cousins explains why Trump thinks he can win the next election through childish insults.

The Associated Press is reporting that sources inside the White House. Say That Donald Trump is currently work shopping nicknames for 2020 Democratic presidential candidates. What they’re telling us is that Donald Trump is sitting around, he’s bouncing ideas off of staffers on what kind of horrible and stupid nicknames he can come up with for his Democratic Challengers in the 2020 election. Now, we already know he’s going with Pocahontas for Elizabeth Warren. Uh, this morning he decided to just go with crazy. Bernie Sanders. Not Super Creative, but sure, that’s what you want, but he’s still at this point in time, doesn’t have anything for Kamala Harris or Corey Bbooker or Julian Castro or God only knows what he’s going to do with the peat Betaed Edge. I can’t imagine what kind of horrid nickname he’s going to have for that. He probably can’t even pronounce his last name correctly and I’m not even sure I did either. But nonetheless, this is the kind of juvenile mindset we’re dealing with in the White House today.

The AIDS that the Associated Press spoke to confirm that. Yeah. Donald Trump is sitting around trying to come up with what he thinks are mean nicknames to attack his Democratic Challengers. Could you imagine what would have happened if Obama sat around doing this and the White House and Fox News got wind of it? Hell, we would still be hearing about that today if George W. Bush had done it. MSNBC would still be talking about that today. And yet, here it is. Donald Trump, the idiot man-child sitting in the White House, sitting there possibly a pen and pad. I don’t know how he works coming up with a little nicknames than saying, Hey, staffer, what do you think of a stupid Bernie Sanders? No knock. Okay, crazy. No, this is what’s happening folks. We actually have real problems in the United States today. We have a gun violence epidemic. We’re burning down the planet and doing absolutely nothing about it.

People are dying because they can’t afford their medication. Uh, we have an entire generation that is being crippled by student loan debt and the best we can get out of the president of the United States has a couple of stupid nicknames that he hopes will resonate well enough with voters. He is not addressing anything that actually matters with the American public. All of the things that we’re concerned about, all of the issues that continuously pull super high and show bipartisan support for he doesn’t care about. Instead, all he cares about is trying to make himself look better by trying to tear others down because that’s the only thing this knows how to do. He doesn’t know how to build something up. He doesn’t know how to make something great again. He just knows how to insult people and hopes that those constant insults are going to berate them into submission.

We’ll guess what, I don’t care which democratic came to that you currently support? I honestly don’t see any of them that are willing to cower down and be frightened by old stupid little nickname that Donald Trump throws out. We do have a lot of democrats out there and every one of them right now is proving themselves to be a true fighter and that is what we need because we need somebody that’s not going to get annoyed with Trump’s nicknames. That’s not going to get distracted by them. We need a candidate that’s going to continue to focus on the issues and just let the public sit over there and watched Donald Trump flail his arms and craziness trying to insult people because he knows he can’t win if he actually talks about the issues. That’s the Democrats only path to victory at this point.