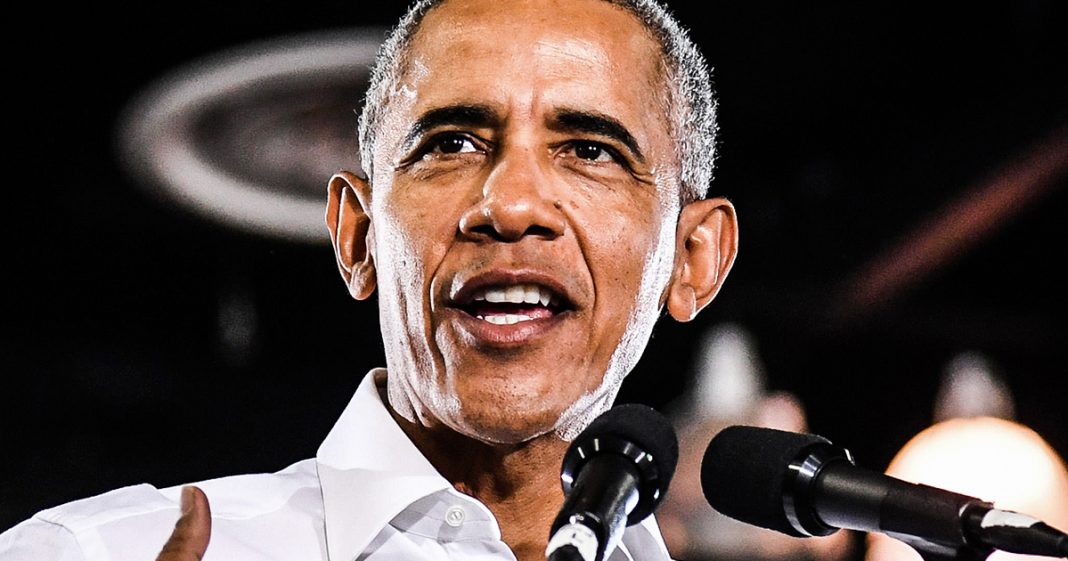 According to a new report in The New York Times, a group of wealthy Democratic donors met recently to figure out which 2020 Democratic candidates they’d like to purchase. The report essentially glosses over this fact to focus on Obama advising candidates, but the truth is that the big money donors are the ones that we need to focus on. They have the power to ruin the 2020 election just like they did in 2016, as Ring of Fire’s Farron Cousins explains.

There was a very interesting article in the New York Times that came out this week that talked about the fact that Barack Obama may not be endorsing anyone for president in 2020 but that’s not the interesting part. I honest to God, could not care less about that part of the story. What was interesting where the first two paragraphs of the story that actually told an important story that the New York Times then totally dismissed and moved on from to talk about, we’ll Obama endorsed anybody who knows, maybe you won’t even endorse Joe Biden. And here’s the real story that the New York Times buried in the first two paragraphs, a secret meeting of former president Barack Obama’s financial backers convened in Washington early this month. Uh, the group interviewed and array of 2020 presidential candidates and debated whether to throw their wealth behind one or two of them. All right? That’s the first paragraph of this story.

So we have a bunch of wealthy donors, people who had given to Barack Obama, which is kind of irrelevant. That sentence didn’t need to be in there, but sure. Why not throw it in? Um, they met in DC, I’m in a secret meeting. They interviewed 20, 20 Democratic presidential candidates and then talk to monks themselves about which one of those candidates do we want to buy? Ah, who seems like a good investment? Who are we going to throw our millions of dollars behind to try to buy them off? And then the rest of the article just goes into Obama. Well, he’s staying pretty silent in this 20, 20 election. He’s not endorsing anybody. You miss the story here. We have wealthy American citizens with more money than they know what to do with sitting around at a little secret meeting in DC, meeting with Democratic presidential candidates, including Kamala Harris, Cory Booker, Amy Klobuchar and Sharon Brown interviewing them to see if they’re going to be their candidate.

You know, like this is some really creeped out version of American idol. You know, I guess they had to stand up on a stage and do a little audition saying, I, I’m not going to raise taxes on corporations. I, I, I’m not going to institute a marginal tax rate. Please pick me. Give me that golden ticket to go to the White House. That’s what’s happening in the New York Times. 100% missed the damn story here. It is infuriating. I want to know more about this secret cabal of wealthy democratic donors who are out there acting like they’re the gatekeepers. They’re not, I don’t know exactly who all of these wealthy donors were not. It’s unfortunate, but again, that’s a failure of the New York Times right here. We need to know who these people are. We need to know if any other candidates joined into these meetings. We need to know what was discussed and we need to know what kind of promises these candidates are making to their donors and if they’re different than the promises they’re making to the American public.

This is why people don’t trust the Democratic Party. You know? It’s pretty much a guarantee that it, Republican politicians are going to be paid off and at this point it’s pretty much a guarantee. The democratic politicians are going to be paid off, but we have seen some candidates openly reject any corporate PAC money. The DNC itself wouldn’t do that. They’ll still take the money, but we have seen candidates and now Bernie Sanders enters the fray. How’s that going to work out with these other candidates? Meeting behind closed doors with these wealthy donors whose names we don’t even know? We don’t even know what industries they’re from. This is going to be a disgusting and ugly primary process, folks, I think. I think that’s something we can all agree on because if we do have people like Harris and Booker and Klobuchar and Brown meeting behind closed doors with wealthy people trying to buy them off, then yeah, we’re in for a very ugly year and a half until we get to the 2020 elections.