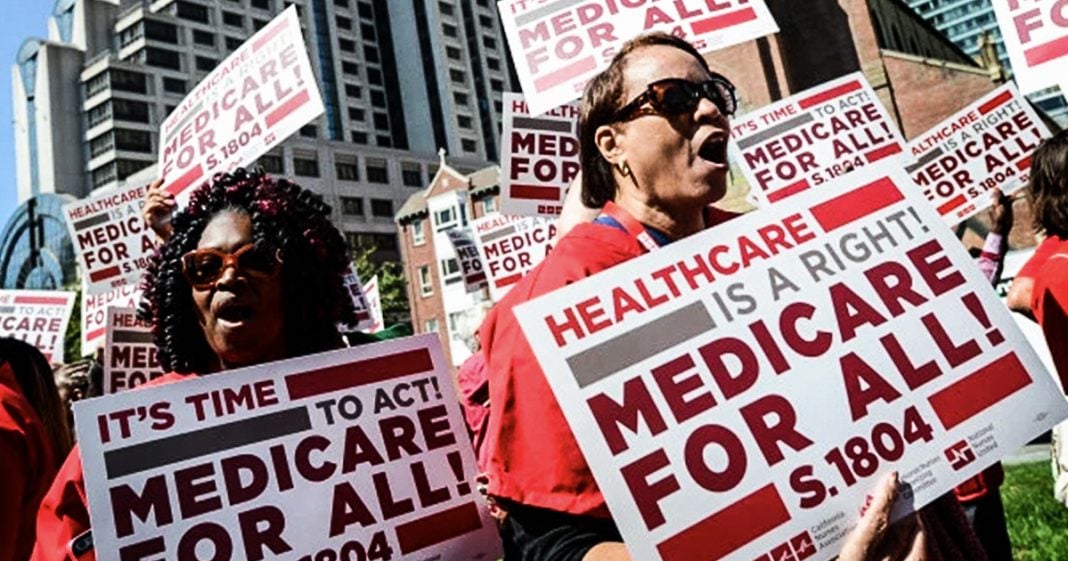 A new analysis by the Urban Institute shows that the prices paid by Medicare and Medicaid enrollees has grown at a slower pace than those paid by people in America with private health insurance. This analysis shows that government programs are able to control costs better than the private industry, blowing a huge hole in a decades-old Republican talking point. Ring of Fire’s Farron Cousins explains why the government programs are so much better.

According to a new analysis by the urban institute. Government run health programs like Medicare and Medicaid are better at controlling costs than private health insurance companies. Here’s what they found between 12 uh, 2006 and 2017 so over an 11 year span. Medicare spending per enrollee increased by 2.4% per year. During that time, Medicaid spending grew by 1.6% per year. Meanwhile, private insurance spending grew by 4.4% annually. So we have two government run healthcare programs, one for the poor, one for the elderly, and both of those were somehow able to control costs better then what those of us with private insurance had. I mean almost double the amount of spending per person growth among private health insurance compared to the government programs. We have seen studies like this come out in the past too, except they weren’t necessarily focusing on here in the United States. They were focusing on other countries and countries with government run.

Healthcare programs tend to spend less and see far slower growth in spending per person for healthcare services than those countries like us that have to rely on private health insurance. The point I’m trying to get at here is that not just all over the world in these countries with socialized medicine, but even here in the United States, for the few people that are on our socialized medicine programs, they’re getting better coverage, they’re getting better prices, they’re getting better deals than the rest of us who have to go through private insurance. It is nearly impossible to look at these numbers and you actually, when you look at the numbers, you see that more and more people had enrolled in these programs and yet they still manage to keep the costs lower. I mean logically you would think that more people go on it, you’re going to spend more money, but these programs are actually so efficient that they didn’t have to increase their spending.

I mean obviously they did increase the spending overall because there were more people, but their costs, I should say the costs did not increase. Meanwhile, for those of us from private health insurance, we’re averaging 4.4% increase in cost per year. That’s inefficient. You can’t look at these numbers and tell me that a medicare for all program here in the United States would not be a better system and I know there’s always those big conversations of how are we going to pay for it? How are we going to pay for it? Well, maybe we don’t need to spend close to $800 billion a year on our military. I mean the next seven or eight countries who spend as much on their military combined, we still spend more than double what all of those countries spend. Again combined, we could cut that in half. We could cut it into a quarter of what it is still be spending more than everybody else and provide better quality health care coverage for people here in the United States, run by a government program that knows damn well had to get things done.