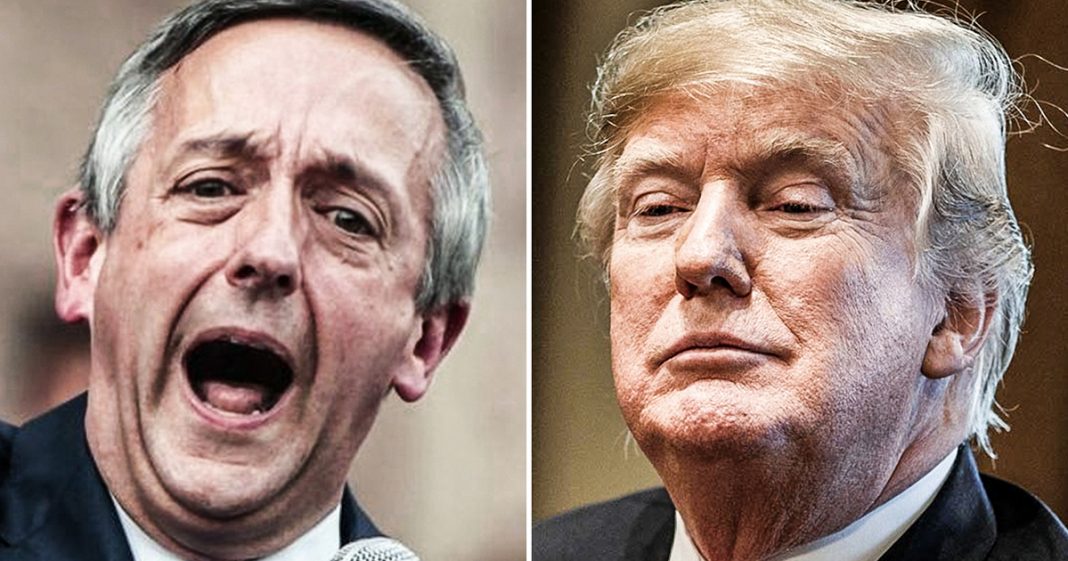 Pastor Robert Jeffress, a longtime Trump ally and Religious Right leader, appeared on a radio program recently where he said that the “Never Trump” evangelicals in this country are absolute “morons” for not supporting the President. Jeffress says that these people refuse to admit that they were wrong, but Jeffress may want to look in a mirror – or perhaps in a Bible. Ring of Fire’s Farron Cousins discusses this.

The religious right has made an unholy alliance with Donald Trump for some reason. And one of his biggest supporters in the religious right is a Dallas based pastor Robert Jeffery’s. We’ve spoken about him in the past and he’s been a longtime ally of Donald Trump. And last week Jeffrey’s actually went on a radio program that was hosted by a Fox News commentator, Todd Starnes. We’re Jeffries, said the following about evangelicals who refuse to support Donald Trump. This is his exact quote here, says, let me say this is charitably as I can. These never Trump evangelicals are morons. They are absolutely spineless morons and they cannot admit that they were wrong. So according to Jeffrey’s, this alleged man of God, any evangelical that does not blindly support Donald Trump is a moron, a spineless moron. And you somehow refuse to admit that you were wrong for not supporting him. You know the philandering guy who’s been accused of sexual misconduct by at least 19 different women.

How dare you not support him, you morons. You know, the guy who’s really trying to get us into an illegal war in Venezuela and possibly even Iran has been helping to murder kids in Syria through our sale of weapons to Saudi Arabia and our support, uh, for this civil war in Yemen. Yeah, you’re a moron if you don’t support him. I don’t follow that line of logic, but luckily Jeffrey’s explains a little bit because like always there’s only one issue that the religious right actually cares about. And here it is another quote, this is an issue of life and death. This is so black and white. So much about good versus evil. I don’t get it. It really goes to the core of who we are as a country and what kind of country we have in the future. And if we can’t get this issue of life right, I just don’t know where we’re going to go down the road.

And he is of course referring to Donald Trump being the most pro life president in American history. So that’s where it lies. Ladies and gentlemen, you’re a moron if you’re an evangelical and you don’t support Donald Trump because he is the most pro life president in American history. And I swear to God, I would love to see all the receipts from everything this man has ever purchased. Cause I am willing to bet there is an abortion on there somewhere. You cannot be this kind of a philanderer and have affairs with any woman you see down the street and not eventually screw up. I would love to get my hands just on one because there is no way, it is no way that this guy hasn’t had to pay for an abortion at some point in his life right now. Total speculation. Maybe he hasn’t. Maybe he’s a great guy, but we can make assumptions based on his history, based on his philandering and based on his disgusting, uh, habits of cheating on women.

Yeah, pretty sure there’s something in there in fact, isn’t that would one of the investigations right now is actually trying to figure out the Karen McDougall payment? What the hell was that about? Yeah, there’s still a possibility that we may get evidence of that, but nonetheless, this isn’t about Donald Trump and what he’s paid for. If he did it, whatever. I’m actually not going to judge him for that, but Robert Jeffries would because Jeffrey’s thinks that anybody who thinks a woman should have the right to choose what to do with her own body is evil in that if you don’t support Donald Trump, you’re a moron. That is today’s religious right. He did. I mean, Jeffery’s flat out said this is good versus evil, so I guess we’re evil and he’s good and we’re morons and he’s not. But I strongly suggest that Jeffery’s invest in a good mirror cause this guy needs to look at what he’s actually doing and what he’s saying. And then after he invests in that mirror, perhaps invest in something called a a Bible, and maybe actually read it. If you can read Mister Jeffrey’s, because you’re going to find out to nothing that you have ever said or done in your life reflects anything that you’re going to find in that little book.