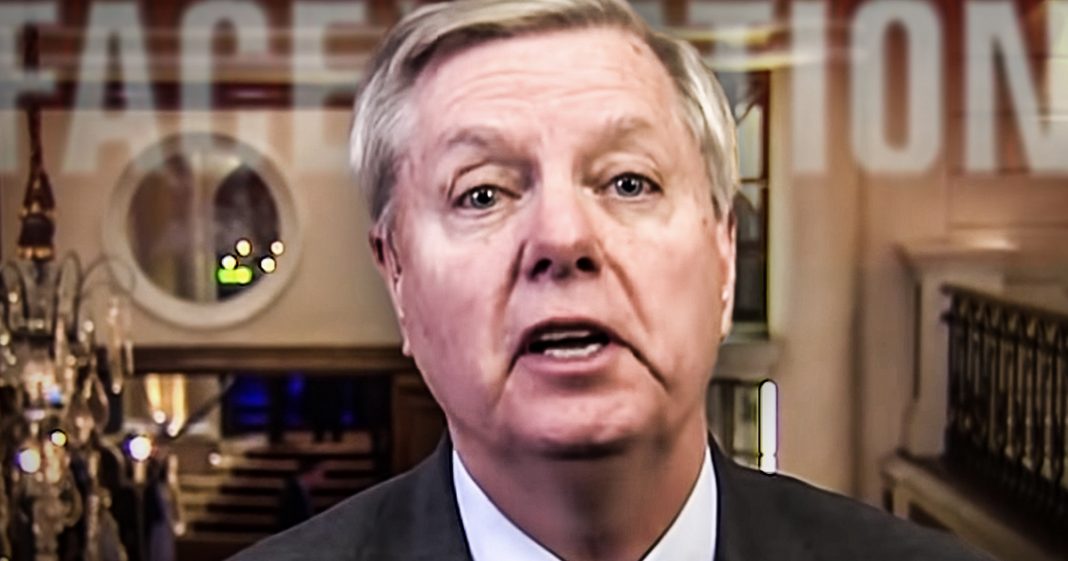 Republican Senator Lindsey Graham has completed his transformation into a braindead Trump supporter, and the final stages of that transformation were broadcast on CBS’s Face The Nation this past weekend. Graham actually said that children would be “better off” if funds designated to build new schools were instead used to fund Donald Trump’s ridiculous border wall. Ring of Fire’s Farron Cousins discusses this.

This past Sunday on CBS face, the nation Republican senator Lindsey Graham somehow managed to complete his transformation into an absolute brain dead Donald Trump supporter. And it was really remarkable because the transformation finished, you know, he entered the last stage of it and completed that cycle, live on the air and he did it by saying that kids in Kentucky would actually be far happier if we diverted funds away from the Department of the defense funds that we’re actually going to go and build some schools in Kentucky if we diverted those funds and put up a border wall. He said the kids in Kentucky would benefit more from a border wall than they would from having new schools and updated schools and you know, better equipment, better textbooks. Kids don’t like those things. Kids like walls says Lindsey Graham, a guy that’s never had a child in his life. I can tell you as a father, uh, my kids would rather have books.

My kids would rather go to school and have air conditioning or heat in the wintertime. Then they would to have a wall on the southern border that they even understand is not going to do anything to solve any of the problems facing the United States of America today. Lindsey Graham is absolutely in the pocket of Donald Trump now, and I know a lot of people on social media have been saying for months now, like a wonder what Trump has on Lindsey Graham, what of what Putin has on Lindsey Graham. Here’s the sad reality folks. No money has anything on Lindsey Graham. The thing is, this is just who Lindsey Graham has always been. Lindsey Graham has done this for his entire career. I don’t believe there is any grand conspiracy. If somebody blackmailing Lindsey Graham, I believe that he is just a piece of crap of a human being and that’s why we’re seeing this happen today.

Yeah, he was all big and tough against Donald Trump and his best buddy John Mccain was still alive, but as John McCain grew more ill, Lindsey Graham realize like, shit, I don’t have any other friends in the world, so what am I going to do? All latch onto Donald Trump, all be his mouthpiece, all be his talking point and in exchange I might have a new buddy to pal around with and go play golf with because John Mccain’s not going to be around much longer. That’s what happened here. Lindsey Graham was just desperate for a friend, for somebody to talk to and an exchange. All he had to do was get rid of what little bit of a soul he had left and that’s why we’re seeing this today. But honest to God, I don’t think there’s any kids in this country. I don’t believe there’s any teachers in this country that would say, sure, go ahead and take the funds away from our education to go build a wall.

You would be hard pressed to find a single student or teacher willing to give up funds to fix their dilapidated buildings and they’re outdated textbooks in order to pay for this stupid wall. Lindsey Graham would likely know that if he spent any time outside of Washington DC and actually went out into the country and talk to normal, average everyday people. But it has been a very long time since Lindsey Graham has taken the time to go through and actually look at and talk to and understand what average Americans are going through. But if he did it, he would understand that nobody, no matter the cost, once that stupid wall between the US and Mexico.