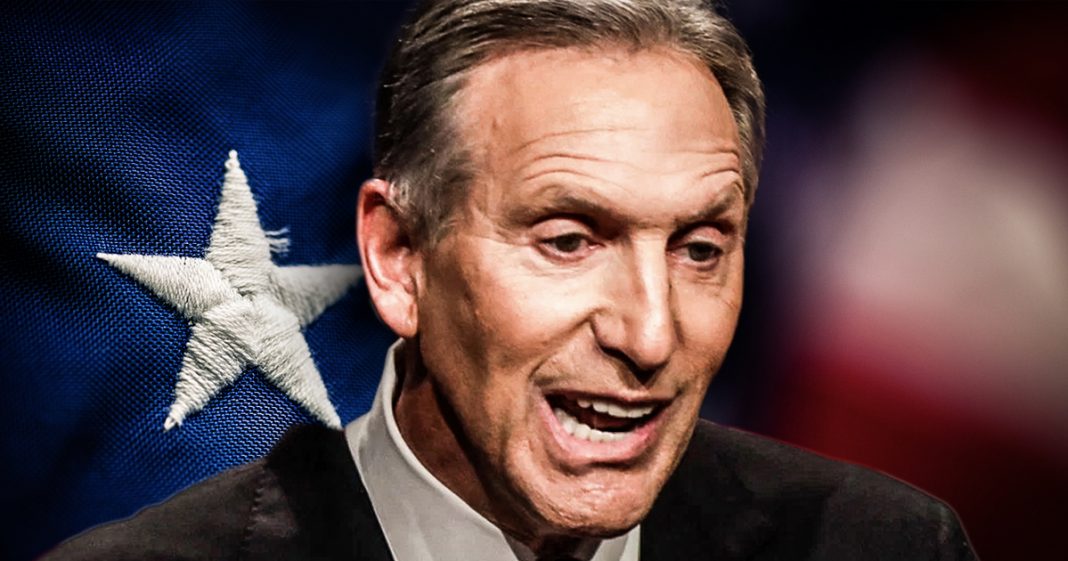 Billionaire Howard Schultz is trying to make it as painfully obvious as possible that his entire reasoning for wanting to run for President is because he doesn’t want to pay higher taxes. In an interview with The Washington Post last week, Schultz said that he would reconsider his political ambitions if, and probably only if, the Democratic Party were to nominate a centrist candidate. If they pick a progressive, Schultz just may have to ruin everything by running for President. Ring of Fire’s Farron Cousins discusses this.

Howard Schultz, the billionaire, former CEO of Starbucks, has basically resulted to extortion in an attempt to get the Democratic Party to do exactly what he wants them to do. And in an interview published in the Washington Post this past Thursday, Schultz laid out his plan very clearly. He says, if the Democrats will just nominate a centrist, I won’t blow up the 2020 presidential election. How about that folks? I won’t destroy everything and helped reelect Donald Trump as long as democrats nominate someone who is not going to raise my taxes. That is what Schultz is saying here. Now, here’s the exact quote, the word for word here. I would reassess the situation if the numbers change as a result of a centrist Democrat winning the nomination. Now, Schultz claims in this interview that his internal polling shows that he is a strong contender, that he totally has a shot at winning the presidency.

Uh, which is funny because I’m wondering what polling data he’s using because what we see on the national scale right now as he has 4% 4% and yet he says his internal polling is totally so much better than that, but it would likely go down if a centrist Democrat were to get the nomination. Um, that’s a lie. That is 100% not true. And Howard Schultz knows that Howard Schultz again is trying to extort the Democratic Party, telling them to push out progressive’s people who want the change that a majority of people in this country are clamoring for all because he doesn’t want to pay higher taxes. That is 100% what this is about. And that is the only reason why hire Howard Schultz is even considering running for president right now. Now again, he is still, has not announced that he is officially running for president, but he has hired staffers, he’s hired advisors and he’s got this whole little internal campaign going right now.

But he has not yet officially said, I am running for president. I have filed the paperwork, let’s do the damn thing. And that’s good. What he’s trying to do right now, because I don’t believe this man actually wants to run for president. I think he knows he has no shot, but he wants to try to use what little bit of sway he has to convince the Democrats to push out the progressive’s. You know the people who say we were going to have medicare for all the people who say, we’re going to raise taxes on the wealthy, we’re going to put a wealth tax in place. We’re going to put a new marginal tax rate in place of 70 to 80% maybe even higher. Who knows? And that’s what terrifies Sholtz. He does not want these progressive policies to become a reality in the United States, even though a majority of the public from both sides actually want these things to happen.

See, here’s my take on the whole thing. I don’t think if Schultz ran, he would blow up the democratic side. What Schultz is going to do, because let’s it, the guy’s a moderate Republican. He’s going to siphon votes away from Donald Trump. Now I know he would get some democratic votes. I understand that, but I believe he would draw more votes from the Republican side than he would from the democratic side because we have seen how energized and happy the Democrats are with these new progressive politicians, the new progressive policies and the left word lurch of the overall political system that we’re building right now. They like that. They don’t like Howard Schultz’s. Meanwhile, on the Republican side, they hate Donald Trump. Yeah, he’s got a pretty high approval rating just among Republicans, but the whispers, the stirring, the people out there being interviewed saying, I can’t believe I voted for this guy.

I feel like I was tricked by. The devil was a quote from one former Trump supporter. They would be far more likely to support a Howard Schultz than they would to completely cross the aisle and go vote for a democrat. And that is why I believe that Howard Schultz would ended up drawing more votes off Trump, thereby helping the eventual democratic nominee. But who knows. The bottom line is, I don’t want this guy to run for president at all. He is a jackass. He is a greedy multibillionaire who only wants to preserve himself and his fortune, and that is why he wants to run for president. And that is why he should immediately be disqualified from ever seeking the office of the presidency.