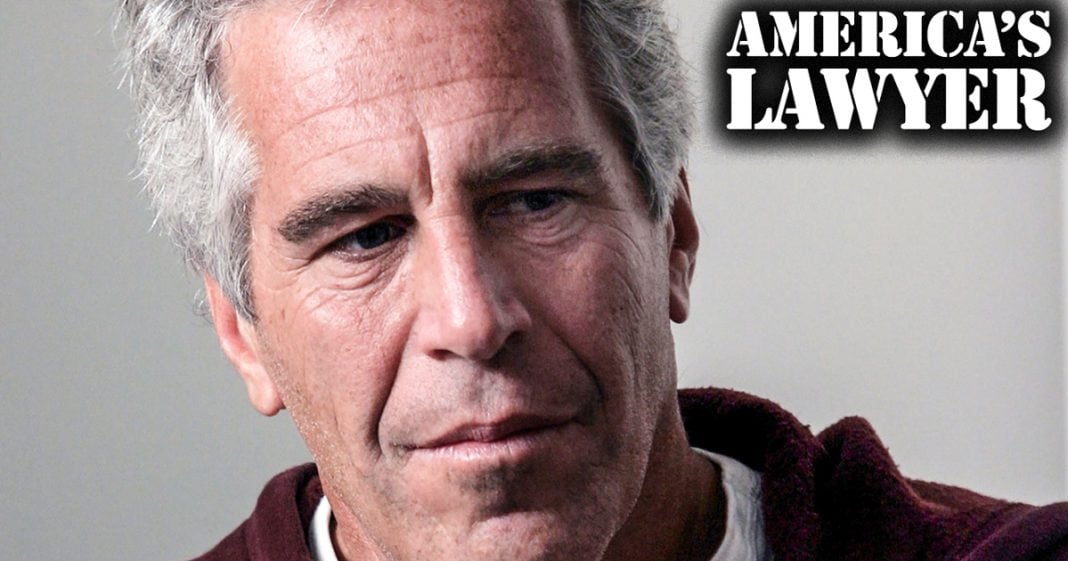 Via America’s Lawyer: RT Correspondent Brigida Santos joins Farron Cousins to discuss the Justice Department’s investigation into Secretary of Labor Alex Acosta, and his role in negotiating a controversial plea deal with a wealthy New York investor accused of molesting more than 100 underage girls. Farron Cousins fills in for Mike Papantonio on this episode of America’s Lawyer.

Farron Cousins:                  The Justice Department has opened an investigation into a federal prosecutors handling of a plea deal that allowed a politically connected billionaire to avoid criminal charges in a child sex offense case. RT correspondent Brigida Santos joins me now with the story. So, Brigida, what was Jeff Epstein accused of and who’s pushing for this case to get reexamined here?

Brigida Santos:                   Epstein was accused of molesting dozens of underage girls and running a cult style sex trafficking ring at his houses in three American States and the Caribbean. According to police interviews and a 53 page indictment, Epstein used his underage female victims to bring other underage girls to his mansions where he then coerce them into performing sexual acts. Some female children were even reportedly trafficked from overseas. This scheme went back as far as 2001 and may have involved at least 103 under age girls. And this week the Justice Department announced that its office of professional responsibility is now going to investigate allegations that federal government lawyers committed misconduct in handling Epstein’s case. And this investigation comes in response to calls from Nebraska Senator Ben Sasse, who has been very critical of this case and how it was handled.

Brigida Santos:                   It was Alexander Acosta. Now he is a federal prosecutor who secretly negotiated Epstein’s plea agreement. At the time he was the US Attorney General, Attorney for the Southern District of Florida and today he is the US Secretary of Labor, which oversees American labor laws including human trafficking. Other lawyers who helped Epstein include Ken Starr and Alan Dershowitz. Under this deal, Epstein pleaded guilty in State Court to two felony prostitution charges for which he served just 13 months in county jail. From there he was granted work release privileges six days per week that allowed him to leave for up to 12 hours at a time. He and his accomplices were also granted immunity from all federal criminal charges and an FBI investigation into whether there were more victims and other powerful people involved was halted as a result of it as well. Now Epstein got off incredibly easy, but his victims and their families were prevented from even seeing that agreement until it was presented in court. So they really couldn’t prepare to object to any of the terms inside of it.

Farron Cousins:                  Right. That honestly, I mean, that has to be one of the most disgusting plea deals that I’ve ever seen, especially considering the number of victims. But as always, you know, there’s a reason this happened. And for Epstein, yes, part of it is because he had $1 billion. And I guess the other part is because he’s got a lot of really powerful friends. So who are these politicians that have been connected to Epstein over the years?

Brigida Santos:                   Well, Epstein is a billionaire hedge fund manager, a lot of his, his clients were very powerful people and they include Bill Clinton, President Donald Trump, and Prince Andrew. Trump is the one who nominated the lawyer to now serve as the US labor secretary. So this is incredibly bizarre and unsettling. And of course as the, as people in the public, we can’t help but wonder whether having friends in these high places paid off nicely for Epstein. So I’m really glad to see that they’re going to be looking into these allegations.

Farron Cousins:                  Yeah, and it’s very disgusting considering the fact that Epstein was literally palling around with a former Democratic president, the future Republican president. This guy had pals on both sides of the aisle so that no matter who was president or had the power, he was always going to be buddy buddy with them. Brigida Santos thank you very much for telling us this story today.