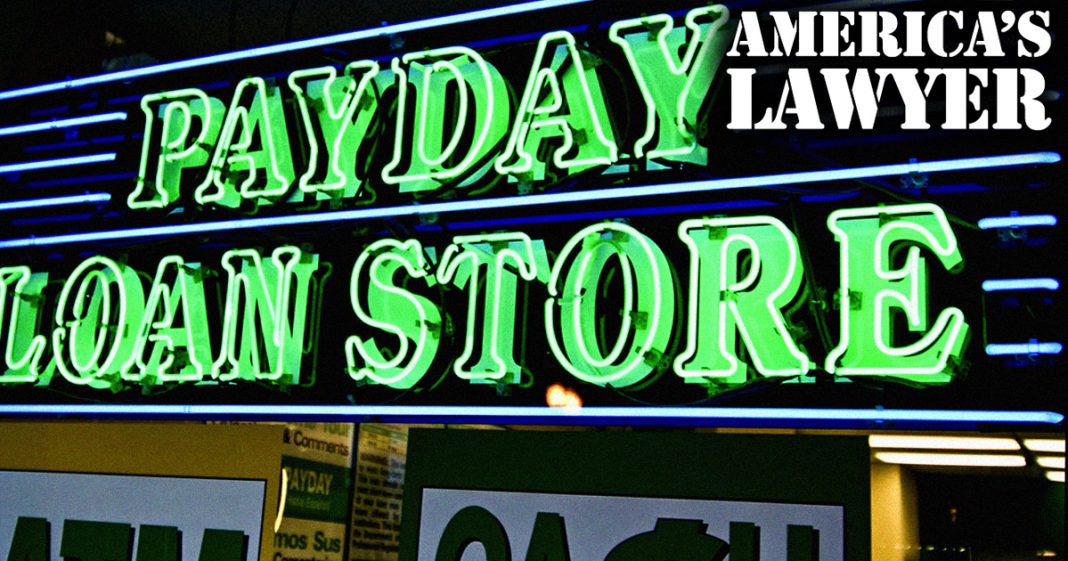 Farron Cousins:                  Roughly 12 million people each year turn to payday lenders in order to secure a quick loan to take care of expenses and according to numbers from the Consumer Financial Protection Bureau, only about 15% of these people who take out these loans are even able to repay them with the remainder having to take out additional loans or just defaulting on these loans all together.

Several years ago, the Obama Administration wanted to put the brakes on this debt cycle that payday lenders we’re creating, but thanks to the new leadership in DC, payday lenders might once again be able to capture millions of consumers in an endless cycle of debts, loans and defaults. Joining me now to discuss a new set of rules for the payday lending industry is Bartlett Naylor, financial policy analysts with Public Citizen. Bart, thank you very much for joining me today.

Farron Cousins:                  So could you start by just kinda telling us about this new rule, which has actually just the repealing of a previous rule from the Obama administration. What’s going on here with the payday lending rules?

Bartlett Naylor:                  As you accurately summarized at the outset, the Obama administration had put in a rule after five years of study to try to bring some reform to this pernicious industry, this industry that traps citizens into a cycle of debt and charges outrageous amounts, $8 billion a year in fees and interest for these 12 million people. The rule was going to be pretty simple, namely that the lender has to do a little bit of research to find out if the borrower can actually repay.

Well, that amount of effort does two bad things for the, for the industry. It means that they have to spend a little bit of time and money trying to see if that borrower can repay. And it, um, reduces the amount of people that they can lend to. So the, the whole point of the business model here is to trap as many people as possible with the, a good calculation that, even though there will be some people who default, as you mentioned, about 20% who actually are unable to repay the entire amount that they’re obliged to.

80% will not only pay that amount, but many times over a $400 loan is going to turn into $2,000 or more in repayments. The, this rule had actually not gone into effect as soon as the Trump administration took over. They delayed the rule and now last week they proposed gutting it altogether.

Farron Cousins:                  And so, you know, you, you pointed out that the Obama administration spent five years, five years researching this, looking into it, making sure that whatever rule it is they came up with was based off of what was happening and what was in the best interest to the consumers. They did not just haphazardly throw this thing together and say, we’re going to stick it to the payday lenders. Here’s a new rule. Good luck with it. So now what’s going to happen to consumers if this rule does go into effect or if it is completely abolished here?

Bartlett Naylor:                  Well, they continue to be victims of these, these loan sharks. And again, let’s look at the context. Roughly 40% of Americans have essentially zero savings. They could not afford to pay for an unexpected car accident, for example. So to get to work, they need $400, $500 to fix their car, and 40% of us don’t have that money. We just went through a 35 day government shutdown where 800,000 people missed two paychecks. And one of the places that they go to are these payday lenders because pretty much everybody gets one, everybody gets a payday loan. Unfortunately everybody has to pay these exorbitant amounts. What’s going to happen is more of the same.

Farron Cousins:                  And what’s really interesting too to me is the fact that we do have so many people in this country, you know, close to half of them who cannot even afford a minor emergency. So we’re talking about if somebody is driving down the highway and they get a flat tire, well think of if you don’t have a spare tire with you, you suddenly have to pay upwards of $100 just to get your car towed.

You have to pay for the, you know, either replacement cost of the tire or the plugging of the tire. So something as simple as driving on the road and getting a flat tire could end up being a $300 or $400 expense and nearly half the country cannot afford for that to happen. You know, something that simple. And of course you’re not going to go to a bank to get a $400 loan. You turn to these payday lenders.

You know, not everybody has a credit card or wants to put that kind of thing on a credit card balance, or maybe your credit cards are maxed out, whatever it is. That’s where the payday lending industry thrives. It’s not the people who owe $20,000 in debt. It’s the people who suddenly find themselves, you know, struggling paycheck to paycheck with a $300 or $400 expense that they can not afford at the time.

That’s why this industry flourishes. They understand how bad things are for the United States, for our citizens, with our incomes. And they found that niche and they have exploited it as much as they could. And that’s essentially how their debt cycle here works, isn’t it?

Bartlett Naylor:                  Yes, that’s right. And this is a politically connected industry. The industry has donated something like $2 million to the Trump, to the Trump campaign and to his inauguration. Mick Mulvaney who crafted this deregulation effort when he was the stand in director for the Consumer Financial Protection Bureau, received millions of dollars of campaign contributions when he was a congressperson from South Carolina.

Farron Cousins:                  And it’s, it’s fun when you can, you know, if you drive across this country, you know, you end up in different cities, different areas, high income, low income. You can always tell when you’re in an area where the average income is probably a little below the national average because you start to see these payday lenders pop up. And that’s what they do. It’s not just that, oh, we hope poor people find us.

They go out and they specifically target low income areas here in the United States. That’s part of their business model, isn’t it? I mean, we know based on the numbers that yes, it is lower income Americans who get targeted. It is the African American communities where these shops tend to pop up because they’re trying to trap these people into these endless debt cycles.

So we know a lot about their business model. And a lot of that can be found just from driving through this country and watching these areas where every street corner is a different payday lender. You know, and I, I say that, I’m thinking of a couple areas in my own city here. We know that. That’s exactly what it is. This street corner has one payday lender. You go a block down the road, it’s a different one. And they’re doing that intentionally to put themselves in the minds of these people who may need the loans.

Bartlett Naylor:                  Look at our community of advocates who are trying to bring reform to this area and among the most conspicuous and interesting advocates are churches, especially churches that cater to a black parishioners. Why is that? Well, in too many cases, these victims of these predatory lenders have already exhausted all their savings.

They’ve sold whatever they can, they’ve gone to every relative and friend and finally they go to a church. And these churches are basically funding the payday industry because that’s the area of last resort. And so it is churches, religious leaders, the Baptist Church in particular that is pressing for reform. And unfortunately speaking to deaf ears at the consumer financial protection bureau under the Trump director.

Farron Cousins:                  You know, the CFPB really doesn’t have any interest anymore in, in protecting consumers from any of these financial scams, do they? I mean, I mean you may as well just drop the CF and P from the entire name because right now this is just the corporate protection bureau. That is what we’ve seen it morph into these last two years, hasn’t it?

Bartlett Naylor:                  That’s right. And we believe they are betraying their mission. We actually at Public Citizen we, we do our mindful of the law and when it’s violated, take, take these miscreants to, to court and are looking at what the legal remedies might be in this case because the, the law that created this, the 2010 Dodd Frank Wall Street reform and Consumer Protection Act clearly identified what the CFPB should do. And we think they’re doing the exact opposite with, in this case.

Farron Cousins:                  Well, you know, Public Citizen’s been one of those groups that’s always been on the forefront of consumer issues. You know, I, I check your website constantly to just stay up to date on everything that’s going out there. So I, I guess in this point, you know, Public Citizen is out there raising awareness of these issues. We know that this rule change has been proposed, has not yet gone into effect. So what can consumers do at this point to protect themselves? And is there anything we can do to actually stop this rule from coming into effect here?

Bartlett Naylor:                  Well that’s a very good question. Don’t have a flat tire is I guess the, the first bit of advice. Public Citizen’s founder, Ralph Nader, famously wrote a book about the automobile industry called “Unsafe at Any Speed,” when then Law, Harvard Law Professor Elizabeth Warren conceive this in a, in a law review paper, she paid homage to Mr. Nader and her, her article is called “Unsafe at Any Rate.”

Public Citizen, as you rightly say, has a key role in the foundation of the CFPB. This, this rule is outstanding. There’s a 90 day comment period. Go to regulations.gov and search for it. The, the CFPB is taking comment for the next 90 days. Contact your member of Congress and your senator to make it clear. With the House under democratic control, skeptical of the Trump administration, there will be hearings where this will certainly come about will, will be a subject. And I think that with enough intense pressure, arguably as a sentient being, Kathy Kraninger, the head of the CFPB, will see what America needs and, and kill this rule.

Farron Cousins:                  Absolutely. Bartlett Naylor, with Public Citizen. Thank you very much for talking with us today and thank you for all of the work that you and your organization do every single day. Thank you.