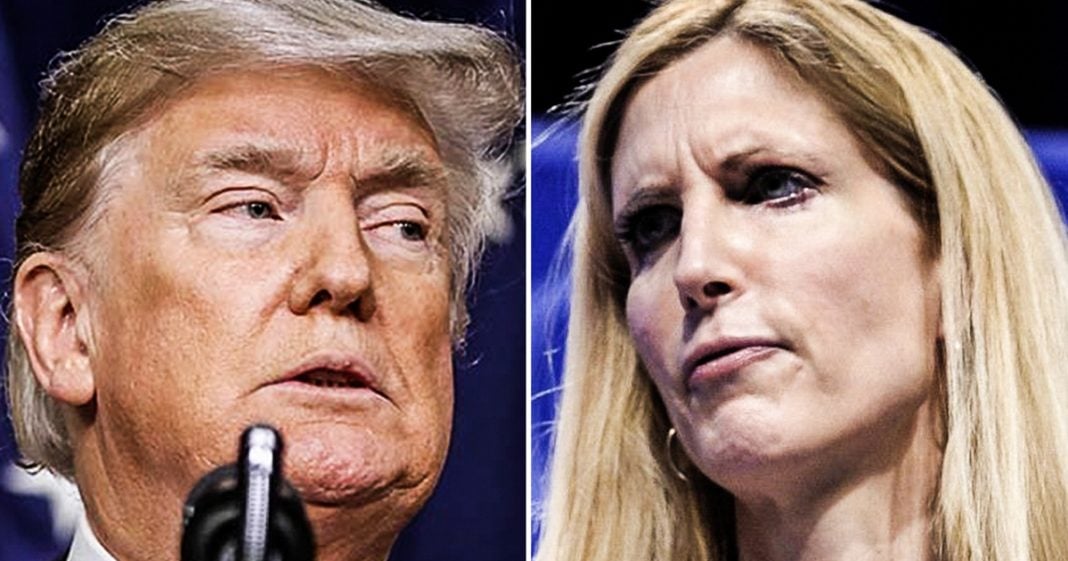 The feud between the White House and Ann Coulter is getting uglier, with the President’s former biggest cheerleader attacking him over his phony national emergency declaration. Sarah Huckabee Sanders hit back at Coulter saying that she has no influence, and Trump took a few digs at Coulter during his announcement, as well. Ring of Fire’s Farron Cousins discusses the drama and how Coulter really is partially to blame for what’s happening.

Well Ladies and gentlemen, if you elect to reality show president, you can certainly expect reality show drama to completely capture this White House. And we have seen it time and time again since Donald Trump was sworn in. But what’s happened over the last four days is absolutely breathtaking. You see, Donald Trump has decided to get into a feud with Ann Coulter. He called Ann Coulter out during his national emergency declaration saying, I don’t know her. I haven’t talked to her in over a year. I, who is this Ann Coulter person you’re speaking of? And then later in the day, Sarah Huckabee Sanders decided to pile on Ann Coulter and say, I don’t think that Ann Coulter, somebody with very much influence at all, certainly no influence over this White House. And that was in response, both of them to reporters’ questions about, hey, remember when you were going to sign a funding bill back in December and not shut down the government?

But then Ann Coulter called you out. So you decided to shut down the government for 35 days and screw over. People lose billions of dollars in the economy and they’re both like, and who, what? I don’t, I don’t know this person that you’re speaking of. And Trump, even in his speech, gave shout outs to Sean Hannity and Rush Limbaugh say saying thank you guys for being such good defenders of me. And then he disavowed Ann Coulter. Well, not to be one to be pushed aside and Coulter fired back at during a radio interview. After all these comments, Coulter said, the following, the only national emergency is that our president is an idiot. Truer words were never spoken. And it pains me to say that these words were spoken by Ann Coulter, but even before she spoke these words on that radio show, she actually had tweeted out something to the effect of, you know, this is not a national emergency.

It’s just Donald Trump trying to play to his base, which is 100% true. But in all this drama, I think what’s getting lost here, it is the cause and the cause is in fact and Coulter. Because as I had just mentioned, culture is the one who called Trump out said, you’re going to cave on the wall, and if you do, you’ll be the last republican president ever Trump freaked out and said, oh crap, I can’t do that when we should shut down the government. Coulter caused this. Coulter is the cause, and now she’s actually getting what she wants and now she’s attacking the president because that’s the cool thing to do. That’s where we’re at. Ladies and gentlemen, Coulter wants that wall, but she wants Mexico to pay for it. She doesn’t want the US to pay for it, which I guess is admirable. Not, not exactly sure what what’s going on here, but the bottom line is this. When you hire a reality show president, you’re damn sure going to get a lot of reality show drama, and that is the only thing that this White House has been able to produce consistently.