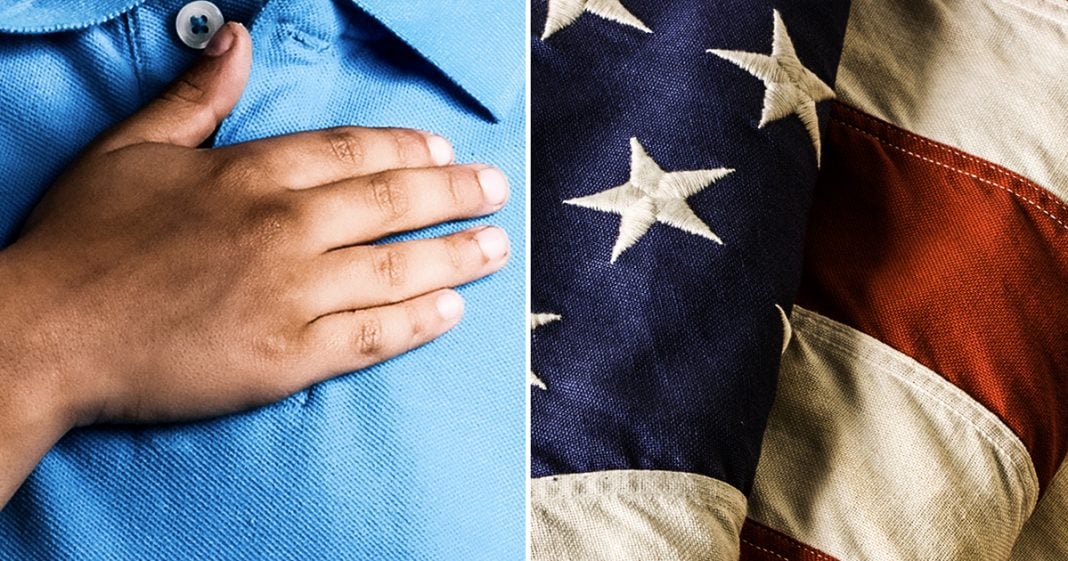 An 11-year-old Florida student was arrested earlier this month after he refused to stand for the Pledge of Allegiance at school. His teacher and the administrators were irate with the child and called the police to handle him. This is disgusting, and the fact that we are forcing patriotism onto our children is absolutely appalling. Ring of Fire’s Farron Cousins explains everything that is wrong with what happened to that student.

And that’s such a bullshit reasoning that we hear all the time from conservative. Like if you don’t like it, just leave. Trust me. It’s really not that easy to just up and leave and go find a new country. While we would prefer to do and what this kid is trying to get across to this idiot substitute teacher is that we want to make this place better. We don’t want to leave here, but that doesn’t mean it’s wonderful and everything is great. It means we want to make it better. But this kid, 11 years old, was arrested for allegedly becoming disruptive because you wouldn’t stand for the pledge of allegiance. Now the school maintains that they have a policy that you do not have to stand for the pledge of allegiance at all. No, no, no. So if this kid was being disruptive, it’s because this substitute teacher and the other faculty who eventually came in there because they provoked him, they tried to make him stand, even though they claim it’s not even their policy.

You know, you cannot legally, by the way, force anyone to stand for the pledge of allegiance. You can’t do that. They knew that they provoked the kid and then use that as an excuse to arrest him. Something that every single person in that school is going to remember for ever. They have put this mark now on this child that is going to go with them that every one of his classmates is going to remember him for, for ever forever and they did it intentionally and they did it by breaking the law. That’s what’s important here and more importantly, I think we need to reassess the entire standing up to say the pledge of allegiance every single morning in school from the time we start kindergarten till the time we graduate high school, we’re forcing patriotism on kids. They don’t even understand the words that they’re saying. They’re, I mean, honest to God, has anybody ever gone through like line line and actually analyze what’s in that pledge of allegiance?

We’re pledging our lives, we’re pledging our undying love and devotion to a thing. The same kind of thing that we would actually ridicule other countries for doing. I mean we look at, you know, the the youth soldiers out there in other countries being forced into this patriotic display. We see it in North Korea, we’ve seen it in the Middle East and we ridicule it. We say how horrible it is. Then we come back over here to the United States and say, you better stand up every single morning and devote your life and your undying love and adoration to the United States of America. We’re no different than everybody else. We are trying to force patriotism on two children and we’ve been doing it for decades at this point, and we just accept it as a thing that we do. Well. To me, that seems like a thing that needs to be reevaluated. It’s not the teacher’s jobs to teach these kids to lay down their lives for the United States of America. It’s their job to teach them things so that they can go out and be productive members of society. Instead. What we’re seeing is that if you don’t follow along with their little forced patriotism, they’re going to haul you off to jail because that is exactly what happened to this 11 year old kid down in south Florida.