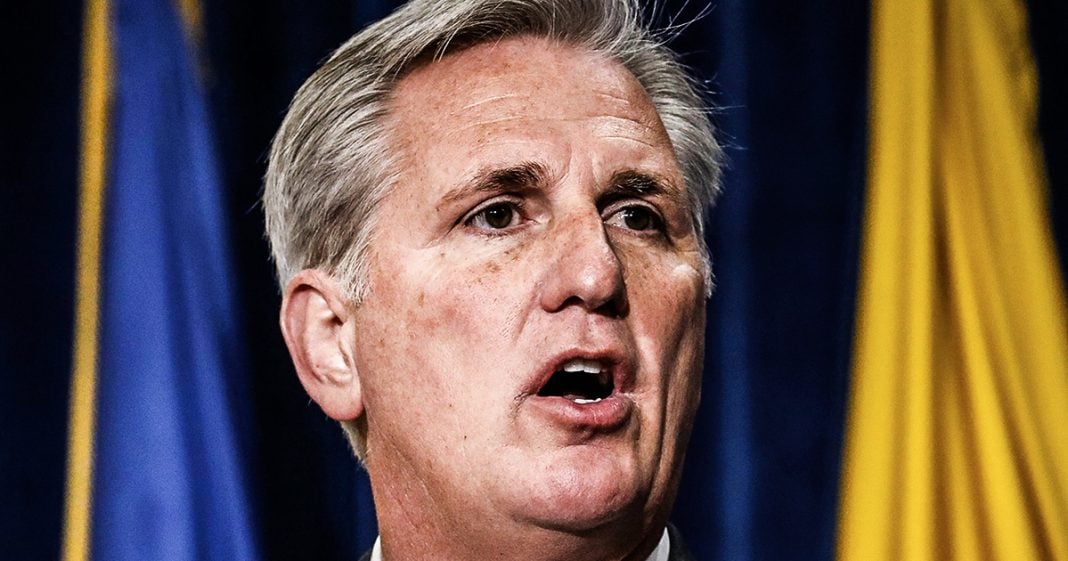 Republican House Minority Leader Kevin McCarthy told Republican donors recently that it was the Tea Party’s fault that they lost in the midterms because they were too hell-bent on screwing up American healthcare. McCarthy has a point, but he misses the bigger problem which is that his entire Party is now the Tea Party – they have been one and the same for nearly 10 years. Ring of Fire’s Farron Cousins discusses this.

This week, House minority leader Kevin McCarthy, while on a phone call with top Republican donors told the donors that the reason the Republicans lost the midterms this year was because those Pesky tea party Republicans on the House Freedom Caucus specifically because those tea party Republicans, but the Freedom Caucus wanted to strip people of the preexisting condition coverage afforded to them by the affordable care act that act by those tea party Republicans. According to Kevin McCarthy on the phone call with donors is what made Republicans lose the midterms. Had it not been for that, had it not been for the far right lunacy of the tea party, they would still be in power today. Well, here’s the thing that I think Kevin McCarthy needs to understand. 10 years ago when these little tea party rallies first started popping up funded by Americans for prosperity and the Koch brothers, you had a chance then to get rid of these folks.

You had a chance to ignore them. Instead, Kevin, you and your Republican Party welcome them with open arms because along with the tea party came a lot of Koch brothers money. That’s when their yearly spending on politics skyrocketed. They were always spending a lot, but once they invented the tea party, man, it went through the roof and you just could not help yourself. You embrace the tea party with one hand while reaching for that cash with the other you and all of the other Republicans in DC. So you can’t sit there and say that, oh drat those pesky tea partiers. They’re ruining our party. The tea party is the Republican Party. There is no separating the two. There hasn’t been for a decade now. That’s how long these idiots have been out there doing this, pushing your party further to the right, alienating middle of the road, moderate and progressive voters and dumbing down the Republican Party and the American populace to the point where we get a guy like Donald Trump in office.

Donald Trump has embraced everything the tea party has stood for. The Republican Party, has embraced everything that the tea party stood for. So I know you’re trying to do your dial for dollars, get these high price donors to start given to your campaign and blaming the tea party while saying, I didn’t do anything wrong. It was them. You allow them to do this. You have allowed them to do all of this and more importantly, you have allowed them to shape the future of your party, which is a party that has zero ideas. You have nothing. There is literally no platform today that the Republican Party stands on other than cutting taxes for the and repealing regulations. That’s it. Those are the only two ideas the Republican party has had essentially since the 1980s. That’s all they are. They have no new ideas. They don’t know how to make things better for the American public and even after droning on about wanting to repeal and replace Obamacare for eight, nine years, um, they still, during that eight year period, didn’t bother to come up with a replacement plan because none of them are good at legislating. So sure, Kevin, blame the tea party. If that makes you feel better, if it helps us sleep a little better at night, but at the end of the day, I hope that you do understand that the tea party and the Republican Party for the last 10 years have been one in the same.