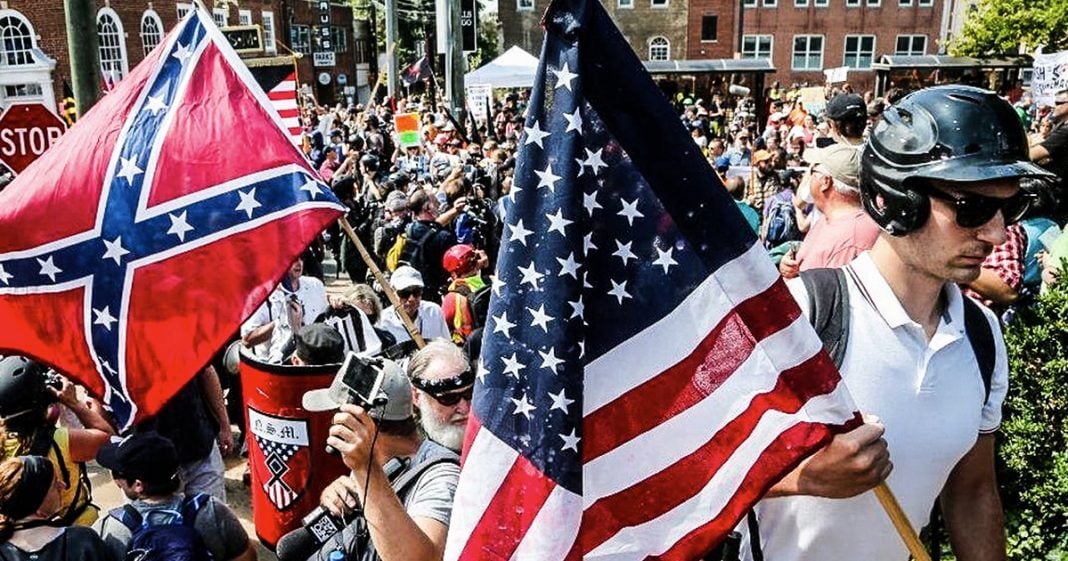 A bombshell new report shows that far right extremists in Portland, Oregon had been having friendly text message conversations with police officers. The texts show that the leaders of the far right groups were working with police officers to prevent the arrests of their members, even if they became physically violent against protestors who showed up at their rallies. Ring of Fire’s Farron Cousins explains what’s happening.

One of the weirdest things we have seen develop in the Donald Trump era here in the United States are these little alt right rallies that kind of pop up and no, I’m not talking about the people who line up and go to the Trump speeches. I’m telling you about what happened in Charleston. I’m talking about things that have happened in Portland, things that have happened in cities all over this country where these alt writers gathered together. Maybe they’ve got Tiki torches. Maybe it’s just the proud boys who the hell knows what these morons want to call themselves on any given day, but they like to show up, create chaos, bait people into fighting them and then play the victims like there’s somehow oppressed. Well, about a year and a half ago, maybe two years ago, I guess, um, in Portland, this was actually December, 2017 so a year and two months ago, sorry. In Portland, there was one of these little rallies and according to a massive new report by the Willamette Week, they actually uncovered text messages via freedom of Information Act request that showed that leaders in the police force, we’re texting with leaders of this alt right group that was going to go stage this rally.

And they were kind of working out a deal to where the members of the alt right group that had outstanding warrants wouldn’t be arrested at the rally. The people involved in the text messages were police Lieutenant Jeff Nia, and he was collaborating with the Patriot prayer leader, Joey Gibson, a council woman. Joanne Hardesty recently brought this up and accounts from meeting talking about this deplorable behavior by the police working with these violent alt righters. Here’s one of the text messages. Uh, just uh, oh, okay. Well I got to give a preface here. Uh, you know, Nia told Gibson that he doesn’t see a need to arrest his assistant who often brawls with antifa protesters even if he has a warrant, unless of course that assistant where to commit a new crime. So here’s the text message, just make sure he doesn’t do anything which may draw our attention from this police lieutenant if he still has the warrant in the system.

I don’t run you guys, so I don’t personally know the officer’s could arrest him. I don’t see a need to arrest on the warrant unless there is a reason. Um, now correct me if I’m wrong, but couldn’t the reason be that he’s got a fucking warrant out for his arrest and you see him hanging out? That’s how that works. How does this police lieutenant not understand that the reason to arrest somebody is because of a warrant? And this is an assistant who frequently during these, uh, put, what is it a Patriot prayer idiot gathering who routinely tries to fight with protesters, counter protestors. He’s got a warrant out. That’s your reason to arrest him. But instead, as the paper pointed out, as these text messages prove, these police officers were more interested in helping out the outright, you know, these, these fascists, these racists, these bigots, police officers, at least in this one instance, we’re on their side. And even though they knew that they had criminals amongst their ranks, criminals with outstanding warrants, they made an agreement to not arrest them. The only question I have is how many other police departments around the country have made similar agreements? These deals with the devil to not arrest these violent, disgusting, and vile right wing protestors?