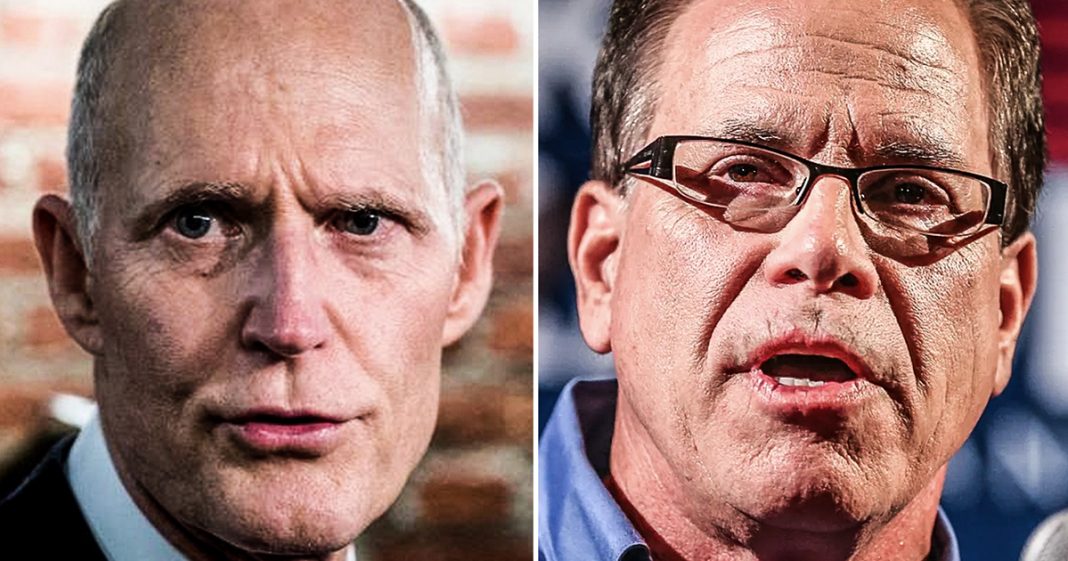 Two extraordinarily wealthy Republican Senators – Rick Scott and Mike Braun – are trying to do away with the pension plans for Congress members that pay them retirement salaries after they leave office. These two men believe that they can get the public to support the plan, but the public is smart enough to understand that this means only the super rich will be able to afford to run for office. Ring of Fire’s Farron Cousins discusses this.

A pair of Republican senators are actually trying to make it to where low income people, people from moderate means basically anybody who is not already a millionaire or more. They’re trying to make it to where those people can’t run for office anymore and they’re trying to do that by dismantling and completely scrapping congressional pensions. The effort is being led by a man with a net worth of over $230 million. My former governor, Republican Rick Scott, Rick Scott, the guy that doesn’t have to worry about a pension, the guy that doesn’t have to worry about his hundred and $74,000 salary a year that he’s going to get as a senator because he literally is sitting on hundreds of millions of dollars in cash. Even though he did perpetrate a one point $7 billion fraud against Medicare and Medicaid from the company he was running and then ran away from once they got in trouble for it.

Rick Scott should be in prison and not in the Senate, but that’s neither here nor there because the voters in my state unfortunately are not the best at picking people. So Rick Scott brings his millionaire horribleness to the Senate and one of the first things he tries to do is team up with Republican Senator Mike Braun, who has a net worth that’s estimated between 35 and $96 million and they come up with a plan to destroy the pensions for everyone serving in Congress. Here’s what that does. Obviously, just like in the case of Rick Scott, it means that if you’re struggling, like say if you’re somebody like Alexandria ocozzio Cortez, we know she does not have a massive net worth at all, but if they were to tell people like that in any other future Ocozzio Cortez, like people out in this country that if you run for Congress, that’s great.

You’re not going to have a pension. You will have no retirement whatsoever, so best of luck to you. Maybe you should just let the millionaires and billionaires run for office because they don’t have to worry about money. That’s what they’re trying to say and that’s what they’re trying to do. That is the goal of this, to keep average everyday working class Americans out of Congress. That’s what Rick Scott wants to do. And here’s the thing, it’s not even like we’re, we’re sitting out paying these massive pensions, the former members of Congress. Here’s how it works. This is according to think progress here. Uh, to qualify a former member must be either 62 years old with five years of service or be at least 50 years old with 20 years of service. So a retired member of Congress with 25 years of service is going to receive an annual pension of roughly $67,000. A single term senator is going to receive an annual pitch of less than $18,000 when they reach retirement age. So the pensions already pretty small. You know, you can get better pensions, uh, working in just a regular company, but they do exist and they’re there for a reason to help take care of the people who did devote their lives to serving as an elected official. But Rick Scott wants to take it away. Just like when he was governor of the state of Florida, he decided to sell the states private jet that the governor’s office had because he didn’t need it. He had a private jet, so he was just going to use his jet instead of the one that the state, the taxpayers had already paid for. So we got rid of that one.

And if you don’t think that’s important, let me just explain something real quick. We’re aware, I’m sitting in Florida, which is borderline Alabama. That’s a horrible, it is. Uh, it’s about a 15 hour drive to the bottom of the state. This is a much larger state than it really gets credit for. So yeah, the private jet was important, especially in a state where we do tend to have a lot of natural disasters. But Rick Scott sold it because I don’t need it so surely nobody else is ever going to need it. And he’s doing the same thing with congressional pensions right here. He’ll never need it. He doesn’t care about that money. He just cares about the power that he’s gotten. All the money he’s already sitting on.

Mark my words, Rick Scott will one day run for president of the United States. That is what this has been building up to. You don’t go from governor to senator if you don’t have bigger political ambitions. I know Mitt Romney did it, but trust me, Mitt Romney’s not out of it either. We’ll see his name pop up again too, but Rick Scott, in the meantime, before he can secure that run for president wants, there’s no republican incumbent. Rick Scott is trying to remake the house and the Senate so that it’s only welcoming and accommodating for millionaires and billionaires.