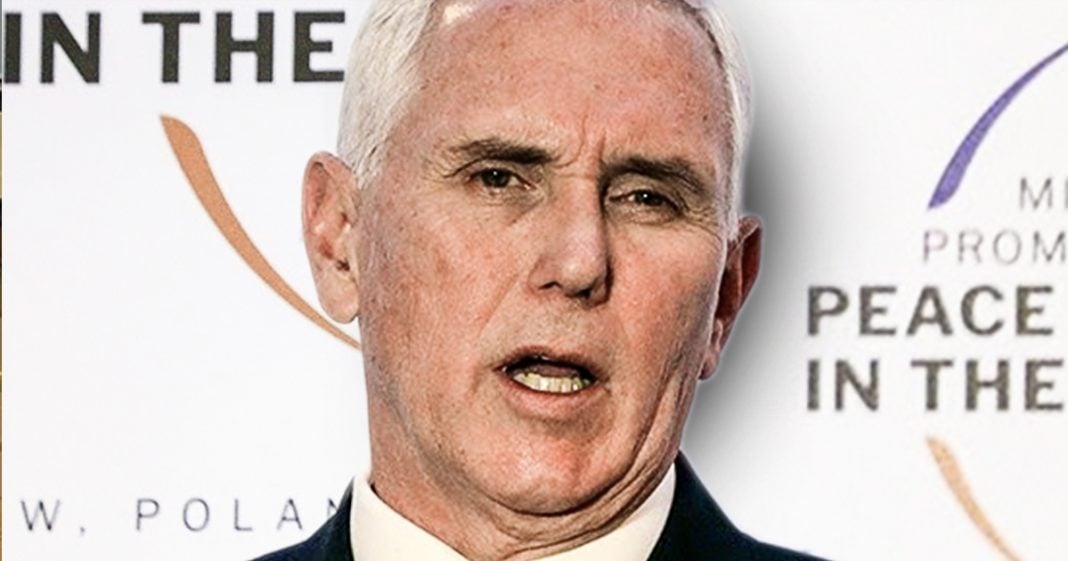 During a speech this week in Poland, Vice President Mike Pence tried to urge EU leaders to join in his crusade to launch a war against Iran, even though there appears to be absolutely no rationale behind the administration’s fevered pitch for war. EU leaders weren’t buying Pence’s speech, but he might have shored up some support from brutal regimes in the Middle East. Ring of Fire’s Farron Cousins discusses this.

While Donald Trump and the Republicans and the Democrats this week, we’re trying to work out some kind of deal to not shut down the government a deal that ultimately caused the president to declare a national emergency. Mike Pence in Mike Pompeo, we’re over in Poland in Warsaw, Poland at a u s led conference where they were beating the drums very loudly, trying to get EU leaders to join in with us and start a war with Iran, which honestly, to me, it’s kind of interesting because you know, last week it was, it was Venezuela and the week before that it was a ran and then the week before that it was Venezuela. So I guess right now we’re back on a rant, but I think the bottom line is that one way or another, one country or the other, we’re going to end up in an armed conflict in a foreign sovereign country before the 2020 election.

That is my prediction and I believe it 100% maybe it’ll be a ran, maybe it’ll be Venezuela. It will definitely be one of them, possibly be both of them because this administration will not stop beating those drums of war. Now, as for Mike Pence, in his little speech over there in Poland, he was trying to tell the leaders there that are ran. A quote is plotting a new holocaust. That’s what he said. Those were his words. They’re plotting a new holocaust. Dot. Did he have any evidence to back this up? No. Did he have any information as to what he actually meant? No, he just knows that his boss, John Bolton wants to go to war. And so Mike Pence, the vice president is going to do whatever he has to do to go and convince the rest of the world to go to war with us. You know, we kind of burned out all of our goodwill when we lied to the same countries that pence is lying to today, uh, about Iraq.

I don’t think they’re going to sign on to another American war of aggression in Iran. They, they’ve seen this before. They remember it very clearly. It wasn’t that long ago. They know how this story ends. And it doesn’t end well for anyone. It creates more instability in the Middle East. The United States might get to take a little bit of their oil and then we’re going to have other groups move in like we did with Iraq and just create more violence and chaos and terror. It’s what the u s is best at. We don’t make new democracies. We make new hotbeds for terrorists to arise. That’s what we’ve been great at for decades now. And Mike Pence wants to continue that tradition. Mike Palm Peo, who was also with pence echoed those claims and they even said, you know, listen, we know a lot of you folks out here, you know, maybe you don’t want to do it.

But then they did get a little bit of support. Benjamin Netanyahu, who was there, uh, they got other support from, uh, Saudi Arabia. You know, those folks don’t mind going in and starting a war of aggression, war for territory perhaps in their cases. Who knows? They just know that even though a ran is actually still complying with the treaty that we pulled out of, they just know they want the us to come in and do something, and unfortunately, I believe as long as Republicans are in power, eventually it’s going to happen. Eventually it is going to happen. John Mccain himself was the one who was beating the drums of war against a ran back in the 2008 campaign. When he jokingly saying, the bom, Bom, Bom, Bom, bomb Iran. This isn’t something new. This is something Nia cons have been planning for more than a decade and as long as they stay in power, they will eventually get their wish. Whether or not they’re able to convince any other countries in the EU to join us is irrelevant. They just want a little bit of backup if they need it. You know, other countries to place the blame on, but even if they don’t get that, eventually this war is going to happen.