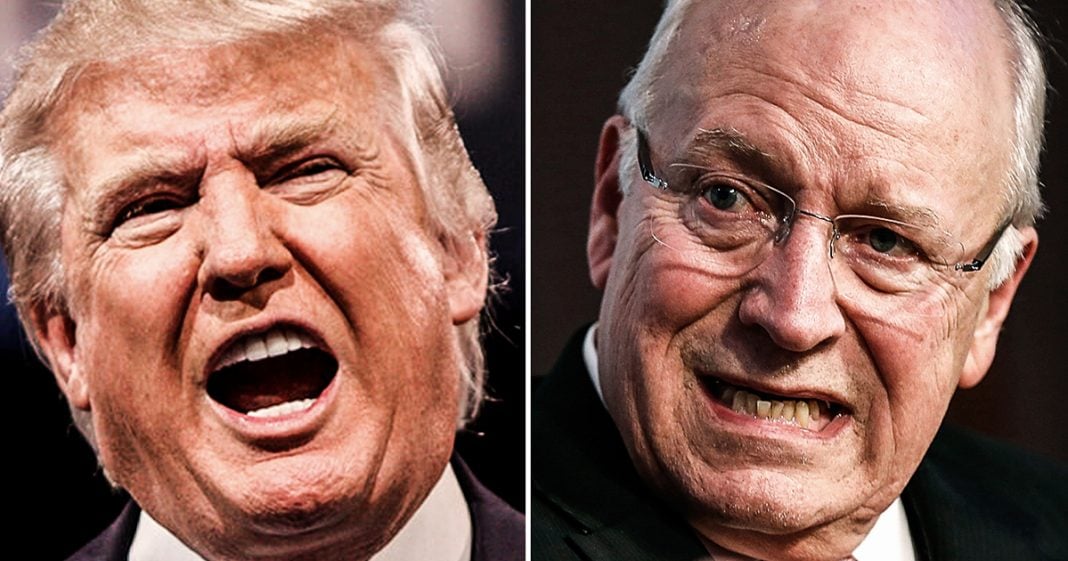 Former Vice President and current horrible human being Dick Cheney was one of the least healthy vice presidents in modern history, and the White House didn’t even try to hide that from the public. But the man who has been working on Dick Cheney’s heart for years says that the current White House is absolutely hiding something about Donald Trump’s health, and Ronny Jackson’s phony report a year ago proves it. Ring of Fire’s Farron Cousins discusses this.

Most people may not realize this, but it’s actually been a little bit over a week since Donald Trump had his second yearly White House physical. And unlike after the first physical, we’re doctor Ronnie Jackson came out and told us that Donald Trump was essentially the healthiest human being who’s ever lived. Uh, we didn’t get a press conference this time and it’s likely because it turns out that Ronnie Jackson was a, uh, essentially a fraud basically. Yeah, he is a doctor. He went to medical school, but, uh, he lied through his teeth there to the American public. So after this second physical, we didn’t get a press release how we didn’t even get any test results released from the White House. And there’s one person who actually finds this incredibly suspicious and that person just happens to be Dr Jonathan Reiner, who has been the long time cardiologist for Dick Cheney. And I know a lot of people were curious about the fact, but yes, Dick Cheney actually does have a heart.

Um, and he’s had a lot of heart problems and we’ve known about that since the time he was vice president. They didn’t try to hide that or cover it up. Dick Cheney was constantly having heart problems, but his own cardiologist to guy trained to recognize this kind of stuff and basically look at people and tell from the lifestyle basically how healthy they are is telling us that something is very suspicious about the White House, not releasing the results of Donald Trump’s latest physical and Dr. Jonathan Ryan or believes that the White House is trying to hide information from the public. And to be honest, I completely agree with Dr Reiners assessment here. I think about it after the first physical doctor, Rodney Jackson did come out, he gave this press conference and he said that, you know, yeah, if he just ate a little bit better and exercised a little bit more, he could live to be 150 years old.

Yeah, it was a bit of a joke. But even doctors themselves are willing to admit they can’t predict someone’s future health. So why would Ronnie Jackson say something like that? And in fact the, the little bit of Info we did get out of Donald Trump’s recent physical essentially said the same thing. Like, yeah, just you know, a little bit of Diet, a little bit exercise and this guy is going to be healthy, healthier than most for years and years and years. Doctor Ronnie Jackson actually had told us that Trumps astounding health in spite of the fact that he looks like he does was the result of just good genes. It’s just good genes, everything’s great with him, great jeans. Um, which anybody who can literally see him knows that’s not the case. I don’t know if Doctor Ronnie Jackson is aware of this, but you can actually look at somebody and see what their genes have done to them.

So yeah, Trump not so good genes there, but nonetheless, when you have medical experts out there telling us that the White House is obviously hiding something, I can look at this man and I can see that this is not the kind of guy who is in great shape then that should give us all cause for concern here. Because keep in mind something happens to Donald Trump. What do we get? We get Mike Pence and then what comes along with Mike Pence, the appointment of a new vice president who probably wouldn’t be somebody who is the target of any of these investigations, right? I, we might end up with like a Paul Ryan or something. That’s a scary thought because then even if these investigations do take down the entire Trump administration, we would end up with President Paul Ryan and nothing would change. See where I’m going with this. Not that I’m saying I, I, you know, think these investigations going to take down the entire administration.

I don’t think they will, but Trump’s lying to us. The White House is lying to us as they always do and something’s going on here and we as a public have a right to know. We should be able to know if our commander in chief is at risk of dropping dead from a heart attack the next time he lifts his golf club above his head. That’s the kind of thing we should know because if he’s at that point or if he’s not healthy enough to carry on, then he needs to be removed from office and replaced with somebody who is not going to stuff their faces with big macs until their blood pressure is essentially through the roof or give us that information so that we can make a better informed choice in 2020 and say, do I want the guy that may not make it past Thanksgiving dinner or do I want to vote for the person who I know is healthy enough to maybe even go jogging each morning when they’re in the White House? People need to be able to make informed decisions in a democratic society, but as long as the White House continues to withhold information like this, it’s virtually impossible for us to make any kind of informed decisions. And the only reason they would want to keep that from us is because they know there’s something in that medical report that they don’t want us to know about.