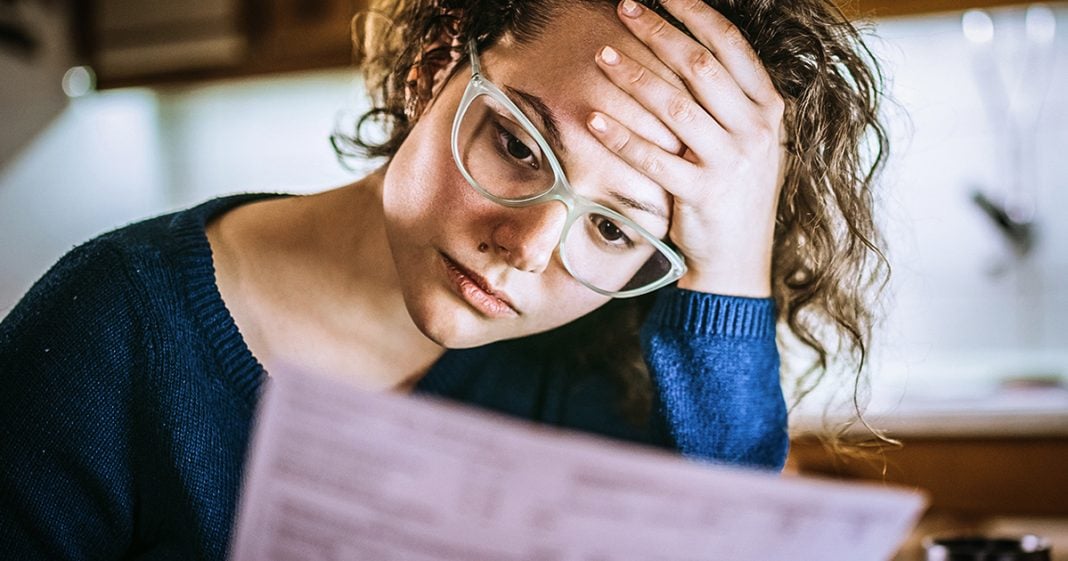 More than 7 million Americans are currently at least 90 days behind on their car payments and facing repossession. Nearly half of the country could not afford an emergency that costs them $400 or more. Meanwhile, we’re being treated to nonstop media coverage of whiny millionaires and billionaires complaining that liberals want to raise their taxes. Ring of Fire’s Farron Cousins explains what’s actually happening in the American economy today.

If you listen to the president or if you’re watching CNBC or Fox News or hell, even if you just look at the statistics, the u s economy is doing amazing right now, right? I in, everything’s on the up and up. We’re creating more jobs. Unemployment rate is going down, wages allegedly are going up. Everybody’s doing great, right? Well, when you did pass the surface statistics, you find out that no, the u s economy is in shambles and shit is about to hit the fan in a way that the Trump administration doesn’t even understand. And here’s what I’m talking about. According to a new report, a new report that economists are saying exhibits massive red flags for the overall economy. More than 7 million American citizens right now are 90 days or more behind on their car payments. 7 million Americans over three months behind on their car payments, which means nearly all of them are facing repossession at this point.

You may not think that that’s important, right? Okay. 7 million people might lose their cars. What it, what does that have to do with me? They couldn’t pay their car loan so well, here’s why. Economists are actually freaking out about this because economists who do this for a living and study, this kind of thing, they say that car payments are the last payment that people miss. You know, they’re willing to miss a utility payment before that. A medical payment, a credit card payment before they miss that car payment. And once the car payments start being missed, the economists say that that means all of these other things are also being missed. And the reason the car payments are typically the last one to be missed and putting people at risk of losing their cars, it’s because they need that car to get to and from work.

And if things get really bad for them, if they lose their home, they can still live in the car. I know that sounds horrible, but that’s actually, economists have studied this and that is what happens. That’s why people only if they have to, we’ll miss that car payment, especially for more than two or three months like we’re seeing now with these 7 million people. So they’re telling us that this is a huge warning that the economy is in shambles, that the working class people can’t pay their bills, but what kinds of stories are we hearing in the media today? We’re not hearing about this. We’re not hearing about the people who are struggling. The people who might lose their cars and homes and can’t pay for their medications. We’re hearing stories about how horrible it would be to enact a 70% marginal tax rate. We’re hearing stories about billionaires I and how Howard Schultz was given a CNN town hall where he came across sounding like a complete idiot because he had no policy ideas his own just wanted to tell us that, no, he doesn’t think wealthy people should pay more in taxes.

That’s just unfair. The only people doing better in our economy and our society today or the top 1% the bottom 99 are struggling more than ever. The rate of delinquent payments has been steadily rising since 2014 you know this, this even goes back to the last two years of the Obama administration. Delinquent payments are on the rise, but they’re taking a much sharper turn. Now the economy is not doing well, folks. On the surface it looks phenomenal, but the second you start peeling back that wrapper, you see that there’s nothing but a giant pile of crap inside of it. Things are going to come tumbling down. Economists have been warning us about that for the year 2019 for a year now. They see what’s happening. They’re looking at these indicators, the people who can’t make their car payments because that’s a sign of a bigger problem. They’ve been looking at this for a long time and they had been warning us for a long time. It’s just up to us whether or not we choose to actually take the advice of people who know a little bit more about something than we do.