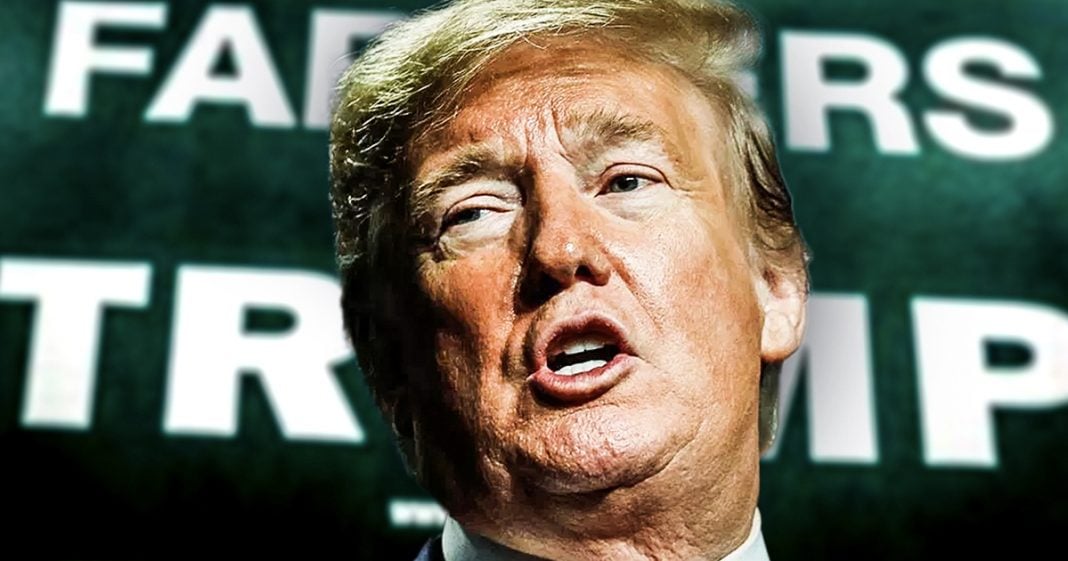 Farmers in the United States are suffering greatly under the Trump administration, with a record number having to file bankruptcy thanks to falling revenues from Trump’s trade wars. These farmers also happen to be part of the backbone of Trump country, and if he continues to squeeze them financially they will be far less likely to support his reelection bid in 2020. Ring of Fire’s Farron Cousins discusses this.

You know, there’s been a lot of discussion, I’ve seen a lot of this on social media recently of, you know, people who are kind of on the fence about trump, you know, interacting with other people and they say, well, really? Has Your Life Gotten worse under Donald Trump? You know, I mean, at the end of the day when you look at everything with your life, has anything actually changed since trump became president? And I know there’s lots of people in this country who say yes, but to be perfectly honest, most people in this country, the answer would be no. I guess technically no. My Day to day life, you know, has not been impacted yet so far by Donald Trump being president of the United States, which even that is not true because we are being exposed to higher levels of corporate toxins in our drinking water, toxins in the air, you know, abuse by corporations.

You know, the deregulation that does affect all of us. It’s just that people don’t necessarily notice it right away, but there are groups of people in this country who immediately got slammed by this administration and their ass backwards policies and one of the biggest groups, one of the groups have seen the most impact on their daily lives since trump came to office and started doing all these awful things. American farmers, ironically enough American farmers in red states in the reddest counties in the red states that voted overwhelmingly for Donald trump. Those people have been hit harder financially than virtually any other group in this country by Donald Trump’s policies specifically. His trade wars have absolutely decimated American farmers in three states, Illinois, Indiana, and Wisconsin. In 2018, the number, a number of farmer bankruptcy’s doubled in those three states. States like Arkansas, so the number of bankruptcies amongst farmers increased by 96 percent.

Farmers all over this country are going bankrupt because of Donald Trump’s trade wars and some of the ridiculous trade deals that he worked out that actually hurt American farmers. More so what’s happening right now across the globe is that American goods, because of trade wars, tariffs, whatever it is, and decreased demand is part of it. American goods are no longer the most attractive. We’re not the best price, we’re not the best quality, so they’re turning elsewhere and actually Australia has been one of the huge beneficiaries of trump’s trade wars because now instead of countries looking to us to buy our produce, they’re actually buying it from Australia who’s making a ton of money while our farmers, the people who put Donald Trump in office or help to put them in office, they’re losing their livelihoods. You know, farms that have been in families for generations gone, their future gone and they have no idea what to do.

This is all they’ve known for their entire life. These people are struggling, these people are hurting, and some of them do understand that they did this to themselves. They were credit, they’re sorry about it, and they’ve made sure to say that they’re not gonna make that mistake again, but at this point, this goes beyond partisan politics, right? This isn’t about, oh, good trump voters. Getting what they deserve, that’s not what this is about. What this is about. It’s not a left issue. It’s not a right issue. It’s about American human being suffering. It’s about an American industry going under and American industry with workers that need help and I think all of us, regardless of our political affiliation, should be able to get behind that and I’m not saying that we need to continue to increase our subsidies to these farmers, which increased by 18 percent last year.

By the way. We shouldn’t just shovel billions of dollars towards them and say, Hey, he had keep voting for Republicans. Here you go. Shut up. We need to do something better. We need to help them. We need to make them more competitive again on the global stage and the only way to do this is to put an end to the trade ward. Now there are no talks going on as trump insists on twitter. That’s not happening. There’s no progress being made. We’re coming up very fast on the one year anniversary of his first tariff that he put in place and the first retaliatory tariff that was put on us, it’s been almost a year and for that entire year he has been tweeting out constantly like talks are going great. China’s buckling they’re going to give into to us. Look at us. We’re doing so awesome. It wasn’t true then. It wasn’t true for months ago.

It’s not true today and it’s not going to be true. Three months from now, trump doesn’t know how to handle this situation. He’s not a smart person. He’s not a good businessman. He’s not. You look at what he’s done since becoming president of the United States and if you think that he’s done a good job or that he’s a good negotiator or a good businessman, then there is something wrong with your brain and I mean that absolutely seriously, if you think he’s doing a good job, you need to go have your head examined because every single piece of evidence says otherwise. The suffering taking place in the American Midwest and the American south right now, the people put them in office. They’re the ones getting hammered the most, and I guarantee you if you go ask any of them, if they’re super happy with everything the president has done, most of them are going to give you an answer. That would probably have to be bleeped out if it was shown on network television.