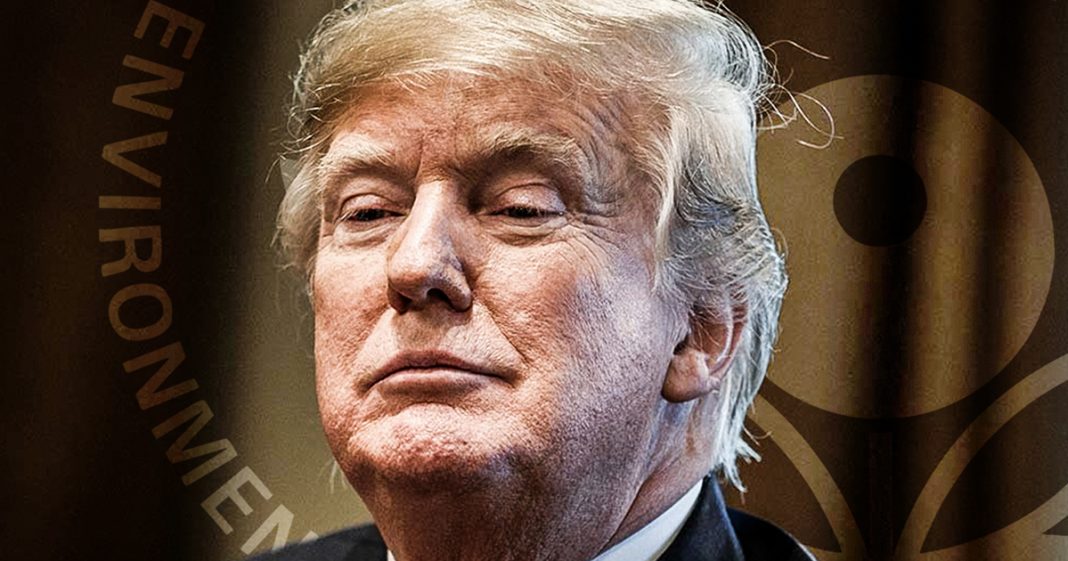 Since Trump took office, enforcement actions at the EPA have almost completely fallen off the map. Investigations and enforcement actions have fallen by about half, and the total amount of fines being taken in by the agency fell by hundreds of millions of dollars per year. American citizens are the ones who are suffering as a result of these polluters getting off without any form of punishment, as Ring of Fire’s Farron Cousins explains.

About the only thing the trump administration has been successful with, other than cutting taxes for the already wealthy is deregulating this entire country that’s been their whole platform since day one, deregulate, undo all of the good things Obama had done and let corporations just have their run of the country doing whatever they want, dumping whatever they want into our water, onto our soil, into the air, wherever it is, just dump away. We’re going to deregulate you and the few regulations we have in place. Don’t worry about it because we’re not even going to enforce those. According to a new report by the Associated Press in forcement efforts at the environmental protection agency last year fell by more than half, and that was after most of them had already fallen significantly in trump’s first year in office, but the second year in office 2018, they fell even more. And here’s what’s important to remember.

This is not because polluters cleaned up their acts. It’s not because they decided they were going to be good corporate citizens. From now on. It’s just because the EPA decided to do what they called take a new tact and just work with these companies instead of set of finding them or enforcing rules are going to work with them, you know, educate them as what they said on what they should be doing and then just never bothered, bothered to follow up and see if they’re actually doing it. Is the second part that they didn’t say out loud. Here’s some stats. Let me read this here. A declines include civil investigations carried out by the agency, the EPA, which fell to just 22 last year down from 40 in 2017. Criminal fines and restitution is also tumbled. Uh, we had 207 million in 2016. Three billion billion with a b in 2017.

But that’s only because two point 8 billion of that was from Volkswagen settlement for their emission scandal, which had been in the works for years before trump came into office. So that one doesn’t even count. And then last year, after averaging minus Volkswagen, about 200 million per year, last year, $86,000,000, the federal government took an $86,000,000 from corporate polluters. That is the sum total of all the fines last year from pipeline spills, from oil by rail disasters, from coal ash spills, from chemical companies dumping their toxins and giving tens of thousands of people cancer. Eighty $6,000,000 is what the federal government fined them. Toll Toll. This is not the way to sustain a country. These chemicals that we’re getting exposed to, you know, whether it’s cold slash fracking chemicals, you know, a Pfo plays in our water. One a 110 million people a third of this country drinking these chemicals that will give you cancer. We’re on the fast track to killing roughly one third of the United States population.

And the trump administration doesn’t care. The EPA has stopped enforcing the rules right now, especially with all the talk of the green new deal. This should be a bigger story. This should be the biggest story in the country today because it doesn’t matter. I mean, yeah, corporate toxins do effect low income Americans more than they affect high income Americans, but they still do affect high income Americans just not as much, but it does affect every one of us. Eventually. This is something all of us are going to have to deal with and live with because when one out of every three people are drinking on a regular daily basis, chemicals that give you cancer, we’re going to have to deal with that too. It could be your spouse, it could be your child, it could be your mother, your father, your sister, your best friend, your coworker, your boss. It could be you drinking that water. One out of three isn’t very good odds for any of us, and we could fix that easily. We could put a stop to it today, but the EPA refuses to do it because they believe that corporations have more rights than American citizens.