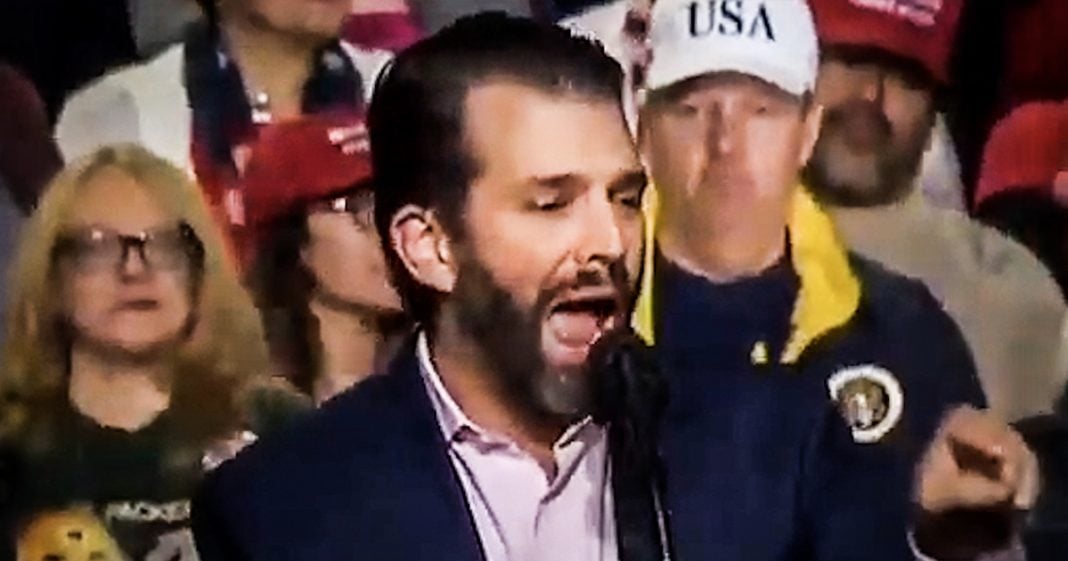 During a rally this week with his father in Texas, Donald Trump, Jr. praised the young conservatives in the crowd for showing up and then told them that they have to keep fighting back against their “loser” teachers who want to indoctrinate them into socialism. Trump Jr. is the one, along with his family and Republican Party, who is indoctrinating children into a losing ideology, and he got promptly roasted for his attacks on teachers. Ring of Fire’s Farron Cousins discusses this.

This week, Donald Trump jr headed down to El Paso, Texas with daddy to give a speech about why they hate immigrants so damn much, but trump jr wasn’t content to just attack immigrants in his speech. No, he had to go and attack American teachers. Here’s what he had to say.

Do you know what I love? I love seeing some young conservatives because I know it’s not easy up that fight. Bring it to your schools. You don’t have to be indoctrinated by these loser teachers that are trying to sell you on socialism from birth. You don’t have to do it.

Losers. He called American teachers some of the hardest working yet lowest paid people here in the United States. He called them losers. If you are a teacher and you are a conservative, you are endorsing this. You are saying, I am fine with this political party telling me I’m a loser because trump jr wasn’t down there being a representative of the trump organization alone. No, this was a campaign rally. This was a policy rally. Trump junior was there as a representative of the Republican Party and that Republican Party representative called you a loser. Let me tell you a story real quick here. My wife is a special education teacher. Uh, she deals with the children who can become extremely violent. My wife is not a very big person. And, uh, shortly before Christmas a student ran off and she attempted to go and retrieve the student as she supposed to. Another male teacher went with her. Things got a little a physical from the student towards the teacher. My wife was kicked down a hill at our school, tore her knee pretty bad, and we found out yesterday actually, that now she is going to have to have surgery to repair her acl.

She hasn’t missed, did not miss a single day of work from that injury. She typically works between 10 and 11 hours per day in at least one full day on weekends trying to lesson plan. Trying to give these students who have such severe needs a better opportunity to do better in the future, to have a meaningful and productive life. Even though they physically assault her. She has been bitten by student, she has been punched, she has come home with bruises all over her body is from these kids and this son of a bitch is going to sit on a stage in Texas and tell me she’s a loser. There are so many words I want to say right now to describe Donald Trump, jr, all of them immensely profane, but he is a worthless waste of a human being. He is an absolute pile of human excrement that somehow came to life as one of the most privileged little assholes in this country. He is a disgusting prick of a human being and I feel that way because what he says directly contradicts what I have seen, not just from my wife but from other family members and friends who also happen to be teachers. They bust their asses every day and I have never heard or seen a single one of them try to indoctrinate a child. Meanwhile, conservatives have all these little groups, all these little college groups out there are these little high school groups popping up whose sole purpose is to go out there and indoctrinate children. This is projection projection from Donald Trump jr.

The problem is, too many people in this country believe it. I don’T care what side of the aisle you are on, teachers do not deserve the bullshit that they put up with solely from the republican party. That’s where it’s coming from. We need to treat these people who are basically interesting, were interesting. our future to them, they’re the ones who have to educate the next generation and we treat them and pay them like absolute garbage. And then you’ve got a true loser in Donald Trump jr who had the audacity to stand up there on that podium and attack them for something that’s not even true. You know, that actually kind of sounds like the entire hallmark of the trump administration attack others because you’re so weak and pathetic yourself that you have nothing positive to say about anybody and you would rather tear them down because you don’t know how to build yourself up.