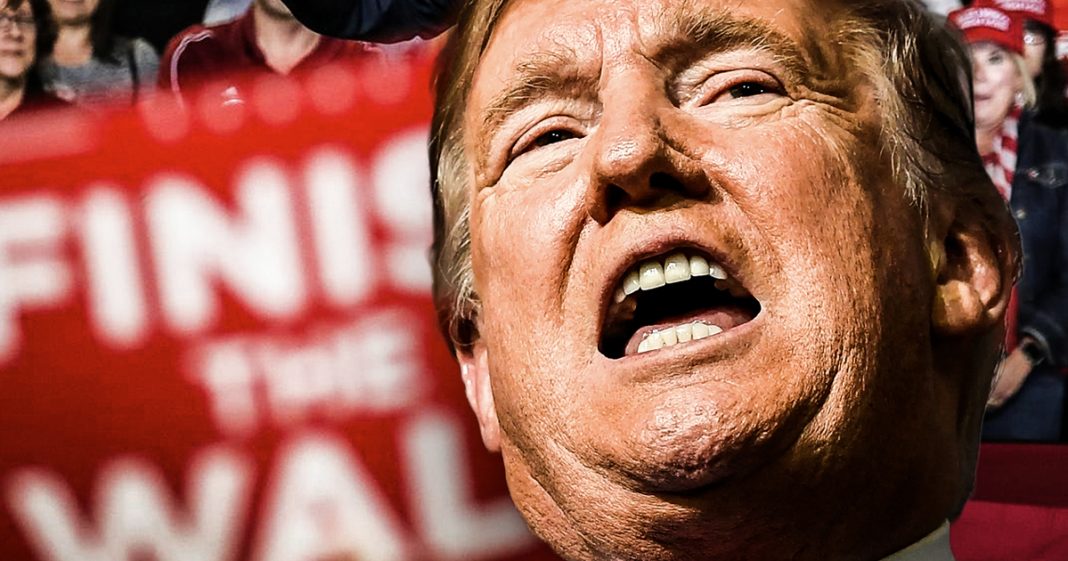 It has been less than two years since Trump promised his rabid base that Mexico was going to pay for the border wall. Then it became an indirect payment brought to us by new trade deals. Then it was tax dollars paying for it. Today, it’s a national emergency. Trump is pushing the limits of presidential power and his legal battles are about to take a serious turn. Ring of Fire’s Farron Cousins explains what’s happening and how we got here.

You know, it’s amazing to me how much the talking points about Donald Trump’s wall have evolved in less than two years. Because think back two years ago, and during the campaign and throughout most of his first year as president, he swore up and down Mexico is going to pay for this wall. Mexico is paying for it. And then when Mexico said, absolutely not, we’re never going to pay for this, you’re an idiot for suggesting it. Trump said, well, okay. If would have meant was there’s new trade deal, I’ve God is going to indirectly pay for the wall. So Mexico is indirectly paying for the wall here to which the American public said, yeah, that doesn’t make any sense. We’re, we’re still footing the bill. And Trump said, all right, fine, screw it. I want tax dollars. I wanted in the budget, gave me the damn funding for the border wall and Pelosi and the Democrats said, yeah, that’s also not going to happen.

Which led to the longest shutdown and government history. And that’s where we are today now with a national emergency allegedly along our southern border, Donald Trump and his emergency declaration. He believes is going to give him the money that he wants for his border wall. And as we have discussed countless times over the past two months, Donald Trump, absolutely 100% does have the constitutional authority to declare a national emergency. Beyond that, all of the national emergency powers of the president are up for interpretation. Now, not even all of them, some of them have already been decided, such as can the president declare a national emergency and sees another person’s property? The answer to that is no. The Supreme Court decided that decades ago during the Truman administration, we know the answer to that and unfortunately for the Donald, part of his emergency declaration would require him to seize property from landowners in the state of Texas in order to build his wall.

Supreme Court’s already said you can’t do that. So pretty much this national emergency declaration should be Doa. But you know, back when Truman did it, we were dealing with the supreme court that wasn’t filled with conservative idiots. So who knows how this could end up? Maybe they’re going to overturn that ruling from the Truman administration. I doubt it mean. I think there’s a good possibility they wouldn’t, but again, you never know. Politics comes before the law with Republicans, so we’ll see. As for the funding itself, there’s several different mechanisms that he could use, none of which are really going to work out well for him. He can either have the military itself physically go down there and build the wall. He can take money out of disaster funds for Puerto Rico and California and that’s not going to go over very well. Or he could get shut down by Congress depending on which financial route he wants to go.

Congress may actually have to approve it, in which case, again, the deal is Doa. Bottom line is that he’s setting himself up for a massive legal fight ahead and so what does he do after making this declaration? He heads to Florida to play golf for the weekend. That that, that’s how big of a national emergency this actually is. Hey, we’ve got a national emergency. Build my wall. I’m going to go play golf for a few days. See Ya that. That’s what this president did. It’s what he’s doing today. This is unbelievable. But more importantly, the issue here is that Donald Trump is trying to expand the powers of the presidency. He is trying to inch closer and closer towards being an actual dictator here in the United States. And unfortunately it is up to our court system that Republicans had been hacking for decades or packing, excuse me. Um, and it’s going to be up to those conservative judges to tell them, no, you can’t do that.

And I think conservative judges do understand that they do have to limit what this man is capable of doing because eventually he’s not going to be president anymore. A Democrat will one day be president again and then it’s going to go really, really bad for all of the conservatives who don’t want national emergencies about actual emergencies like climate change, like gun control, like all of the other horrible things. You know, one in four people can’t afford their prescription medicines. That’s a national emergency. We could seize the means of production at big Pharma, turn it over to the federal government. We could set the supreme court right now that Truman ruling I was talking about said we can’t, but if this supreme court overturns that home, man, the next Democratic president is going to have a hell of a lot of fun.