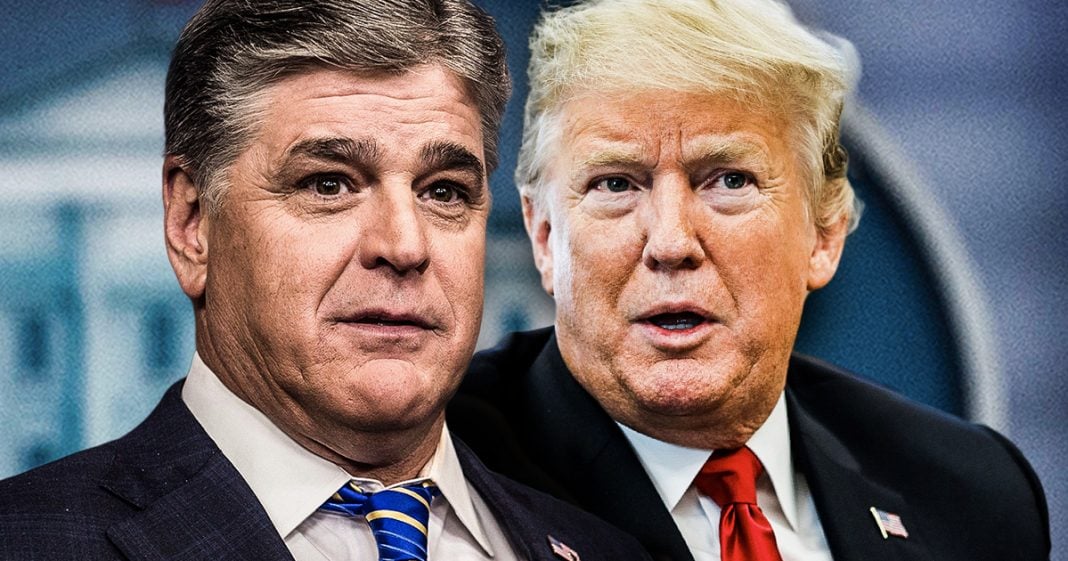 According to a new report by The New York Times, Donald Trump called up Fox News hosts Sean Hannity and Lou Dobbs and begged them to help him after Nancy Pelosi stood her ground during the government shutdown. Trump wasn’t so much worried about the wall not getting funded, he was actually more worried about his wounded image and the amount of praise that Pelosi was receiving. Ring of Fire’s Farron Cousins discusses this.

You know, Donald Trump, now that he’s got his national emergency down on the border, it’s important to understand why we got to that point. And it’s not because there is an actual emergency down there on the southern border, the only emergency down there are the children that we’re locking in cages. But Hey, the administration, you know, did that. So that’s really their emergency, but they’re choosing to not deal with it. So okay. But really the reason this is even happening is because Donald Trump is trying to appease not just his base, because they’re kind of secondary right now. What he’s trying to do is a ps right wing pundit’s. And a story came out from the New York Times this week, kind of showing how bad it got for the president following the government shutdown and his show down with Nancy Pelosi, a showdown that everybody is willing to admit, including Fox News viewers.

According to a new poll today that Trump lost spectacularly, Nancy Pelosi made him look like a fool by not giving him what he wanted. He looked like a horrible negotiator. So according to this New York Times report, what did Trump do? He called his favorite buddies over at Fox News, Sean Hannity and Lou Dobbs begging them to help him. He was begging them to go on TV and tell the other folks at the network to do the same, to defend the president. It say that, no, no, no, no. He’s playing four dimensional, five dimensional chess, whatever it is, the new talking points. Since he can’t even manage to play checkers, they’ve just evolved it into these new dimensions of chess, which is a fancy way of saying the guy keeps losing even though he swore up and down. He was a great negotiator. There’s nothing great about Trump’s negotiation skills.

He lost. He lost again this week with the new spending bill that actually gives him even less money. So yeah, not exactly a master negotiator, but he does get his national emergency, which I am assuming at this point came on the advice of people like Sean Hannity and Lou Dobbs. They knew the president needed to save face. They knew the president needed to flex a little muscle. So I seriously doubt that either of these men didn’t tell him to declare a national emergency Fletcher Authority and see what happens. Then watch those democrats panic and freak out way to trigger the libs by abusing the power of the office of the presidency. The bottom line is this, and this is something again we have said repeatedly for more than a year now, is that Fox News controls the White House, the White House Calls Fox News. The president of the United States is calling Fox News hosts and begging them to help him out, begging them to bail him out, begging them to come up with a plan because he is so powerless against Nancy Pelosi and her sarcastic clap heard round the world.

This man doesn’t know what he’s doing. He doesn’t know how to do it and he doesn’t know what the end game is. All we know now is that we’re sitting in the middle of a trumped up phony national emergency that is going to trigger pretty much already has considering the lawsuits that are ready to go. A major constitutional crisis, the likes of which most of us have not seen throughout our entire lifetime. What happens from this point forward is going to have huge ramifications on the future of the United States. And sadly, it’s up to our conservative court system to put the president back in his place. Cause if they don’t, we have just officially entered a new era of American history and it’s sure as hell isn’t going to be a pretty one with morons like Sean Hannity and Lou Dobbs telling the president what to do.