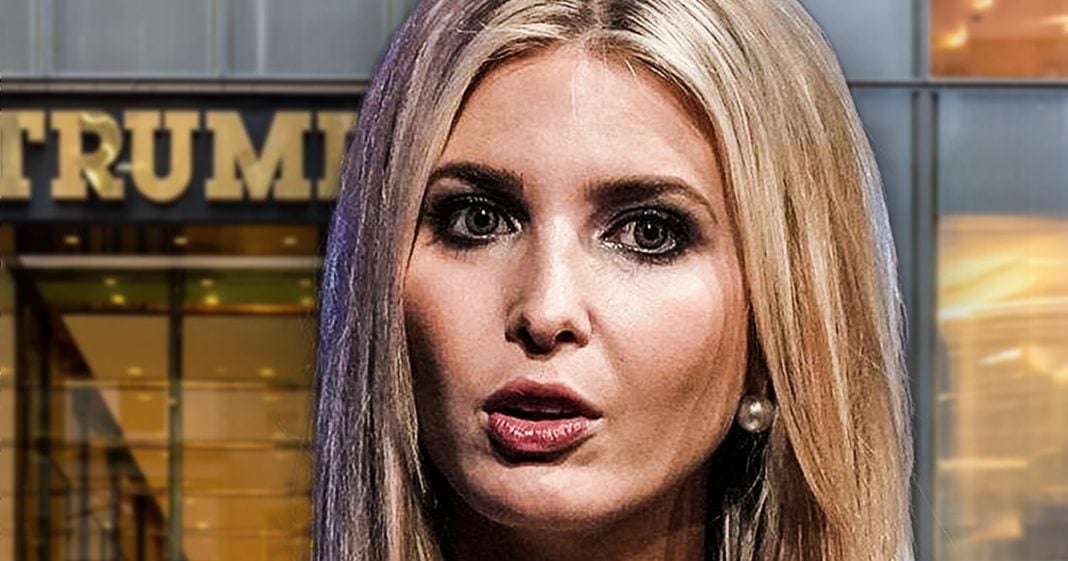 Dems May Force Ivanka Trump To Testify About Moscow Project

House Democrats may have to call Ivanka Trump to testify before Congress to tell them everything that she knew about the Trump Tower Moscow project in order to determine if the desire for the project to be finished led to an unsavory alliance between Trump and a foreign power. This intel could be key, but the Democrats are likely just setting up a perjury trap for Ivanka because they know she won’t be honest with them. Ring of Fire’s Farron Cousins discusses this.

According to a new report by Axios House, Democrats are actually considering hauling Ivanka Trump in front of committee to have her testify about her knowledge of the Trump tower Moscow project. Now recently Ivanka Trump did an interview where she said, look, I, I didn’t know hardly anything about it. Literally almost nothing was the exact phrase she used literally almost nothing, so she knows something about it, which her statement itself admits that she just wasn’t involved in the day to day operations, which seems a little odd considering her former role with the organization and the fact that this was a big deal. They were trying to close to the point where they actually had you know, mock ups ready of what the Tower was going to look like. This was not a project in its infancy. This was a project that had they gotten approval, they were ready to roll with it. So yes, Ivanka Trump had the know about it and so the Democrats in the house or just saying, listen, we may have to call her in.

We want to know what she knows and this could serve two purposes. First and foremost, if Ivanka is honest, and that is a very big, if it could help paint the picture of a man, Donald Trump, who was so desperate to get his project finish, make billions of dollars that he may have been susceptible to foreign bribes in the form of campaign assistance. And here’s the best part. This isn’t just about Russia. They want to look at potentially Middle Eastern con, uh, countries that may have also done the same thing because Democrats and I think a lot of people in the United States understand how to get to Donald Trump. You want to get something on him, you want to get something out of him. All you have to do is promise him money, promised him projects, promised him a spot of land to build a new tower or a new golf course.

Foreign leaders know that as well. In the case of Russia, they wanted their sanctions lifted. Donald Trump wanted to build a tower there. Donald Trump also wanted to run for president. You know, we may not need a pee tape to show that Russia had some kind of Info on Trump. All it could have been was they were dangling that suite business deal in front of his face and that’s what he leaped at the opportunity to get. Same thing with UAE, possibly Saudi Arabia. We won’t know until these people get called before the House to testify or possibly until the Mueller investigation comes out. You know, it may not have been some kind of secret spying, espionage pee tape type thing. It could have been as simple as he wants to build a tower, we need something from the u s government. Let’s work out a deal while illegal.

It’s not necessarily completely sinister. It is dirty, but I think we’re going to probably find more connections in the Middle East. Then we’re going to find in Russia, and I’m glad that the House Democrats aren’t just focusing on Russia. I think the big fish, the bigger fish, the biggest fish, we’re going to find those over in the Middle East. Now, there’s also a second thing that house Democrats might be doing here. They might just simply be setting Ivanka Trump up for a perjury trap. Because remember when I said that it’s a big, if she tells the truth, I don’t think she will. She’s already proven that she doesn’t want to tell the truth about any of these projects. So if the Democrats are able to haul her in front of Congress, catch her in a lie, then boom, you’ve got something that maybe you can issue a subpoena for an indictment for whatever it is. It’s not going to be something that’s going to sway any republicans, but it might make Democrats feel a little better about themselves. And personally, I don’t care if they do that just to set her up for a trap because she has proven to be a horrible human being at every possible turn. Whatever the case, the Democrats are taking the correct approach here. They do need some answers about these business dealings because if there was any collusion between Trump and any other country, you’re gonna find it through those business dealings.