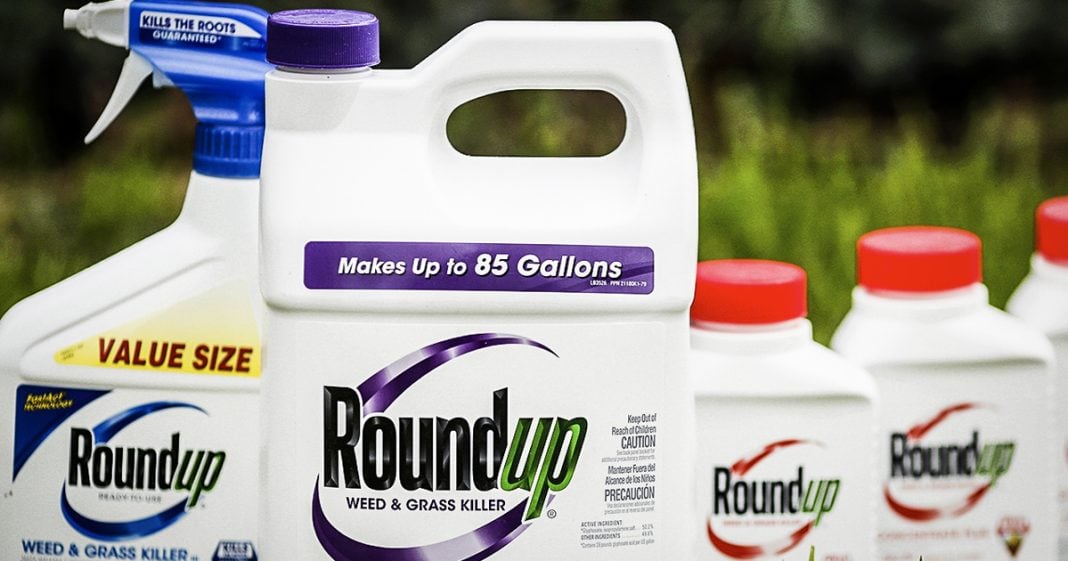 Another new study has come out that once again shows that glyphosate, the active ingredient in Monsanto’s RoundUp weedkiller, has been linked to increased risk of cancer. Regular exposure to the chemical increases the risk of cancer by 41%, according to the new study which just adds to the growing body of scientific literature that tells us that this chemical is toxic. Ring of Fire’s Farron Cousins discusses the new report.

A new report out of the University of Washington says that glyphosate, the active ingredient in Monsanto’s roundup has been linked to a 41% increase in cases of non Hodgkin’s lymphoma among people who regularly use Monsanto’s roundup weed killer. And they, they came to these conclusions by looking according to them about uh, looking at every single published study that has been done on the safety of glyphosate. This is important for many reasons. First and foremost, over the years we have reported every time one of these new individual studies have come out and nearly all of them have said the same thing, glyphosate is linked to higher risk of cancer, specifically one of the worst non Hodgkin’s lymphoma that is associated with this particular a weed killer. But there’s also lots of other neurological issues that it causes, can cause birth defects. It can cause kidney problems, it can cause all sorts of havoc inside of a human body.

That is what the body of work tells us. So University of Washington comes out and they say, listen, we’re going to look at everything. We’re going to pull everything and then we’re going to use their methodologies. We’re going to take their final raw data, compile it altogether, and release the results. And that is what they did. And what they found was a 41% increase in the risk of cancer for people who regularly use glyphosate. And if you’re thinking to yourself, well, I’m just a casual user, you know, I’m not hooked on this stuff. I go out, you know, once or twice a year and spray a couple weeds. Okay, still not good. But there are plenty of people in this country, landscapers, people who work outdoors, farmers who are exposed to this stuff on a daily basis, those people’s risks of cancer are rising because corporations want to continue to tell us that this product is safe.

Monsanto has been telling us that, and now that Beyer bought out Monsanto, Beyer’s telling us that Beyer has already come out and attack this study saying their methodology was flawed. The numbers are flawed, everything’s wrong. You guys are wrong. This is not true. Glyphosate is safe. Those words are going to come back to haunt you. Beyer. I promise you, I can promise you that what you would have done if you are a responsible company is when you bought Monsanto. Here’s what should have happened. You already knew they’re facing hundreds if not thousands at this point of lawsuits about the safety of roundup and you by purchasing the company, assume those liabilities. So what you should have done is said, listen, we think glyphosate is safe, but we’re trying to go through this merger or this acquisition. So what we’re gonna do just for good measure, we’re going to go ahead and settle all these lawsuits so that we can move forward as a new company without having to deal with it.

We’ll slap some warning labels on roundup because we’re a different company. We don’t know what Monsanto themselves we’re talking about are doing. We’ll take the role of leader on this. We will do the right thing from this company that we’re purchasing and we will put it all behind us. That’s all you had to do. You didn’t necessarily have to say that you were lying about it or that you covered it up or anything like that. Just said, listen, we’re a new company. We just bought these people. They’re facing a lot of lawsuits, so we’re going to get a settle all of it. Create a fund for medical monitoring and move on. You could have ended this a year ago, two years ago, whatever it was, but instead you chose to fight it, and that is a decision that is going to come back and bite you hard because all of the available evidence is showing that glyphosate and Monsanto’s roundup can and will cause cancer in human beings.