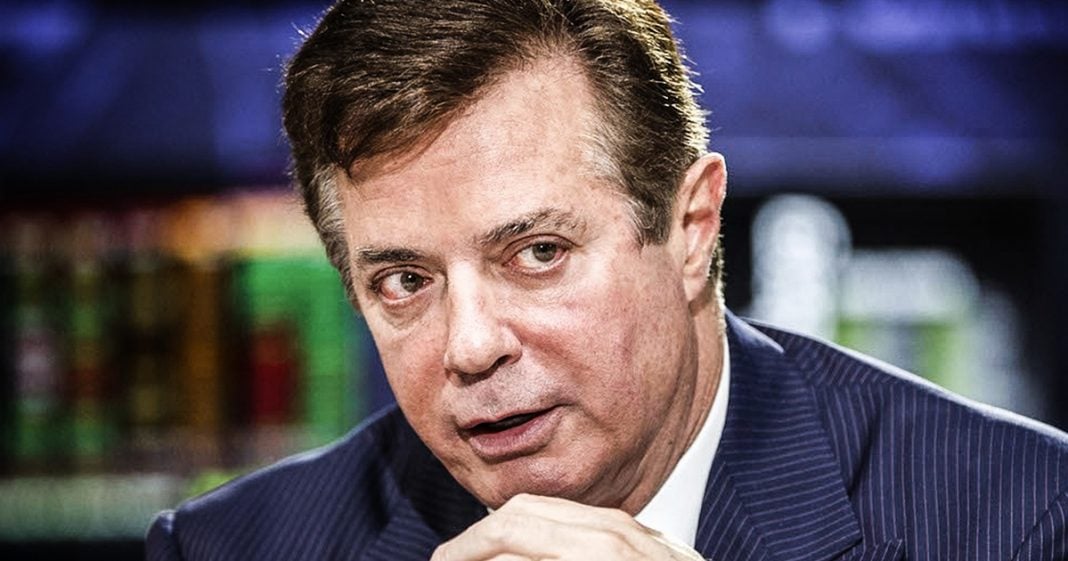 Paul Manafort might not leave prison for the rest of his life, thanks to a ruling this week where the court found that Manafort intentionally lied to the Special Prosecutor’s office, as well as other investigative bodies. This blows his plea deal up, and also puts Trump in an undesirable position as the investigations circle even closer to him. Ring of Fire’s Farron Cousins discusses this.

Yesterday, a federal judge ruled, did Robert Mueller special prosecutor had presented efficient evidence to show that former Trump campaign manager, Paul Manafort, intentionally lied to the special prosecutor’s office and other investigators as part of their ongoing probe. And because the judge says Paul Manafort intentionally and deliberately lied to the prosecutors, uh, there are no longer bound by this agreement that they had the plea deal. So Robert Muller no longer has to come in and try to argue that Paul Manafort should receive some kind of reduced sentence for the fraud and conspiracy charges that he was guilty of. So now, Paul Manafort, because of this ruling yesterday, is looking at a full prison sentence and given his advanced age, almost 70 years old, it’s likely that Paul Manafort is never leaving a prison again for the rest of his life. All because he chose this is according to prosecutors in this case, he chose to mislead everyone about his connections to people in Russia who had connections to intelligence agencies in Russia.

So the big question is, who gives a shit about Paul Manafort? What does this mean for Donald Trump? Right? I know that’s what everybody’s wanting to know here. Well, the answer is not a whole lot. See, most of the things that Paul Manafort was convicted of where things that actually happened long before he ever joined the Donald Trump campaign. So this is not necessarily the end of the line for Donald Trump, but Manafort was cooperating with Muller’s office in order to get this reduced sentence. So if Manafort is feeling a little, oh crap, they don’t have to abide by this plea agreement anymore, maybe I’ll go ahead and shovel out every piece of information. I know. Stop lying to everybody and tell them everything that happened during this campaign. Who reached out to whom were the other people were from? What governments were they working on behalf of? Was it Saudi Arabia was a UAE, was it Russia?

Paul Manafort might be the kind of guy who would know those kinds of things and sensing the fact that he could be facing the rest of his life in prison. He may be willing, if he has that info, to turn it all over to Robert Mueller in an attempt to get them to still honor that plea deal. However, none of this is certain at this point. We don’t know what Manafort knows. We don’t know how much he understands things. We don’t know his involvement in any of that. So I guess basically this story gives us a much bigger question mark than we had even before the story came out. But we do know one thing, and this is one thing for certain, for a guy who claims that he didn’t do anything wrong, Donald Trump, he sure surrounded himself with a lot of people who have routinely proven to be liars, thieves, and con men. It is incredibly unlikely that Trump himself is not cut from the same cloth. You don’t surround yourself for your entire life with nothing but criminals. If you yourself are not also a criminal.