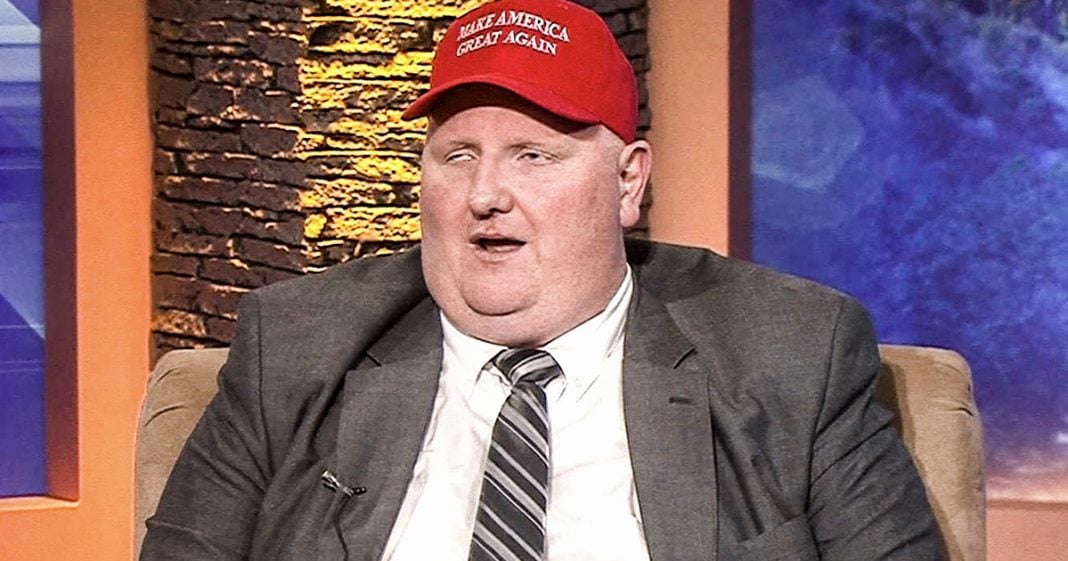 A West Virginia Republican by the name of Eric Porterfield is facing growing calls from across the country to resign from the House of Delegates after multiple homophobic rants. Porterfield, who frequently appears in public wearing a MAGA hat, believes that the LGBTQ community is somehow inferior to the rest of the human race and that they should be eradicated, going as far as saying that he’d drown his own children if they were gay. Ring of Fire’s Farron Cousins talks about this Republican monster and why he’s better suited for horror movies than politics.

You know, the state of Virginia has been in the headlines recently for all the wrong reasons. You have Northam and his black face. You Have Fairfax and his sexual assault charges. You have the Guy Underneath Fairfax, I forget his name, but he also has a black face scandal. But while everybody’s focusing on Virginia, a lot of us have missed the horrible miss coming out of West Virginia. And the horribleness comes in the bloated form of a man named Eric Porterfield. Eric Porterfield happens to be a Republican in West Virginia, serving in the house of delegates who was recently elected to his first term this past November. And Porterfield has come under fire recently for his nonstop string of homophobic slurs. You see, Porterfield believes that the LGBTQ community is the Modern Day, KKK in fact, that is literally what he said. That is what he said is what he told a newspaper. They’re the modern day KKK because they’re filled with hatred and bigotry and they attack anyone who doesn’t agree with them.

The LGBTQ community, biggest hate group in the country, at least raw. Eric Porterfield seems to think so. Uh, the reason all of this came to light is because West Virginia was considering a bill that would add protections to LGBTQ members so that they could not be discriminated against. You know, basically giving them the same human rights that most of us already enjoy. Porterfield wasn’t having it. And so then after he clarified his comments saying they are as bad as the KKK to a West Virginia newspaper, he then got to go on a local morning show where he showed up looking like a bloated turd wearing Amaga hat and said that, oh, he was asked, you know what? What would you do if you’re on kids were gay? And he said, well, I’d take my daughter to get her nails done, maybe get her hair done. And then I’d see if she could swim.

If it was my son, I’d take him hunting, you know, take him fishing and then I’d see if he could swim. What he’s saying is I would drown them. That’s what that, that’s what that saying means. If you’ve grown up in the south, you’ve heard that. And that’s what it means. So this man is essentially telling this reporter that if his own kids were gay, he would attempt to drown them. Now Porterfield is blind. He’s been blind since 2006, uh, uh, the result of an altercation that he had. Uh, it’s very difficult to find any, you know, something really explaining that further other than just an altercation. But he’s also a very religious guy, allegedly. They started a little foundation for blind people, which is great. And I’m not gonna make fun of him for being blind. I understand that. That’s, you know, whatever. But when you look at him, blindness aside, just the rest of him, for him to sit there and act like he is better than any other human being on this planet is absolutely disgusting.

This man has his own demons kicking around inside that very spaces abdomen of his that he needs to deal with before attacking others. And Yeah, I have no problem at this point making fun of this man’s physical appearance right there. I’m not attacking him or making fun of him for being blind. Absolutely not. I wouldn’t do that. But when he shows us that he is just as ugly on the inside, then yeah, fair game at that point, because you’re talking about drowning hypothetically gay children. I’d say all bets are off at that point. And furthermore, took the liberty of going a little further back in this dude’s past, uh, at one point a couple of years ago on Facebook, he starts attacking and Ob Gyn who had talked about, you know, abortion is okay. Well that set off the allegedly religious Porterfield to the point where he ended up making a video that was so threatening to the doctor that the doctor had to file an order against Porterfield and the sheriff’s office saw the video.

We’re so concerned that Porterfield was going to murder someone that they showed up at his house and confiscated his and his wife’s guns. Do you know how much, how much of a danger or a threat you have to be in West Virginia for them to take away your guns? And yet for some reason the voters in that state looked at this tub of lard and said, hey, we want to send him to the house of delegates. That’s absolutely disgusting. This man has led a hate filled life. And you would think after losing his eyesight in an altercation that maybe, you know, for an allegedly religious man, you would think maybe that’s a wake up call. Maybe something happened. Maybe I need to change my life. Maybe I need to be a better person. But instead he took a tragedy and made it worse. It showed the entire country. Now what a horrible, disgusting human being he truly is inside and out.