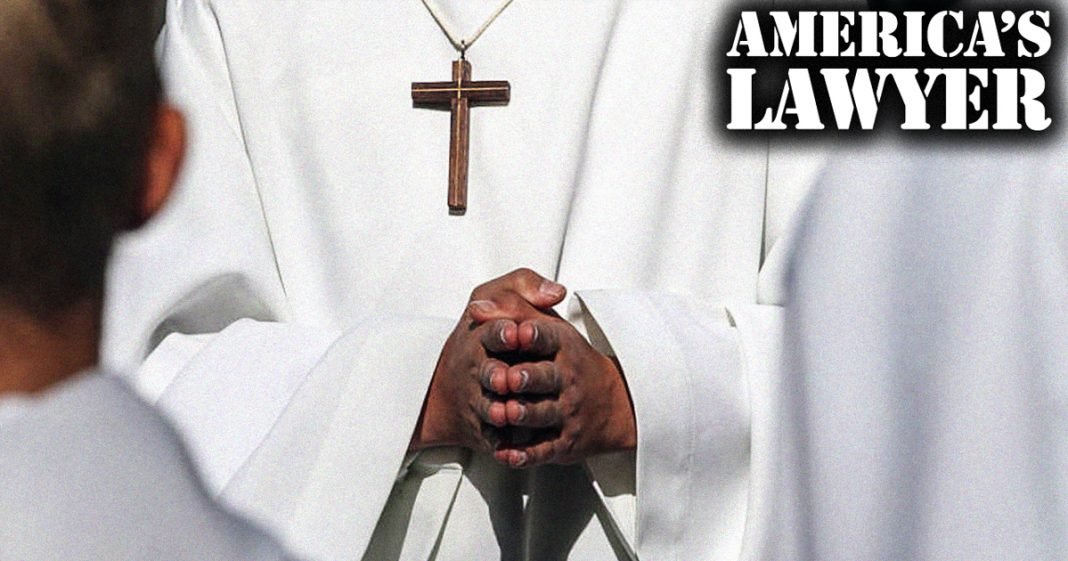 Farron Cousins:                  A joint investigation by two Texas based newspapers reveals hundreds of victims, including children, that were sexually abused by leaders and staff in the Southern Baptist Church dating back more than 20 years. Mollye Barrows, legal journalist with the Trial Lawyer Magazine here is, is with me to tell the story and Mollye I have to say, when I first saw this, this was just one of those shocking headlines.

700, 700 people abused by leaders in this Southern Baptist Church. The same group that had, you know, always been saying how bad the Catholics were for this, but oh, behind closed doors, same thing’s happening that’s happening within the Catholic church. You know, how widespread was all of this?

Mollye Barrows:                It’s horrific really when you think about it. Now this is a joint investigation between two Texas based newspapers, the Houston Chronicle and the San Antonio Express News. So they went back 20 years back to 1998. It’s a wide variety of allegations. More than 700 victims have come forward. And they’ve said that at least 250 through a database that they collected six months worth of research, digging through court records, documents, tracking down accusations, interviewing people, finding individuals.

I say all that to say this, they discovered that 250 of them had already been convicted of some sort of sex crime and there were some 380 that had also had some sort of allegation either level against them that they’d pled no contest to or settled or somehow did not get punished or managed to avoid jail time. So it was interesting all the way around how many people had charges against them of sexual misconduct and who was skirting the law.

And yet also they found cases where some of these churches knew that they had individuals working with them that had a past of sexual predatory, a sexual predator past, and yet still hired them, whether it was a volunteer or a church pastor, or a Sunday school minister. These are just organizations that are affiliated with the Southern Baptist Convention all over Texas.

And it’s such a wide variety of allegations Farron. I mean everything from people saying that they were molested as three year olds to teenagers being raped for multiple years and impregnated by pastors. And yet it’s just a sick system that’s allowed to continue, isn’t it?

Mollye Barrows:                It’s interesting because I think part of it is that these victims have been coming forward for so long to the Southern Baptist Convention and telling their stories and saying, you guys need to make changes within your organization that prevents this kind of thing from happening. Right now, the way you’re set up, it makes it easier, easy for predators to, to join your ranks and hide among your ranks because there’s no database where they can say, hey, we had such and such a pastor working for us.

He had this criminal history or whatever, and now we’re going to let the rest of the churches know. These churches are all run autonomously. So it’s basically the, the doctrine of the way the Southern Baptist Convention works that enables this sort of predatory behavior. And I can’t, it came to light partial because I think these survivors were telling their stories so much.

And also, advocates we’re going forward and saying, hey, there’s, there are things they can do. The Southern Baptist Convention is giving you lip service. These are excuses. That’s the same thing the Mormon Church said, well we, you know, we can only do so much and yet, you know, you can do it. You can report these crimes. You cannot pass the pastor on to the next church or whoever the volunteer may be and, and not worn the congregation.

They found instances where people had had accusations against them and then they were allowed to leave quietly where they turn up in another congregation that had no idea. And these are the same churches in some cases where the Southern Baptist Convention is saying, hey, you’re accepting homosexuality or you’re affirming that as a belief and we’re going to not affiliate with you anymore. And yet there’s no law against having a sexual predator in your ranks.

Farron Cousins:                  Right, and so you can judge a lot about a group by how they react to something like this. So what’s been the actual reaction amongst these southern Baptists to this news that, you know, maybe the, the guy they’ve been listening to every Sunday has this torrid history?

Mollye Barrows:                Sorrow was the word one administrator use, talking to the reporters. They said it was an email and he said, you know, we have so much sorrow when we hear these accusations akin to heart, you know, thoughts and prayers when there’s a school shooting, they have sorrow when they hear of people within their ranks in leadership and volunteers molesting children and people of all ages really. And of course the fallout on these yet, young lives is so horrific.

I mean, then that’s some of what came out in this reporting is there was one girl said she was molested by her choir teacher when she was 14 years old. She was an up and coming model and that she was so traumatized by the event. She tried to kill herself the next day, survived that, but then turned to drugs years later and her mom spoke to these reporters and said, I’m convinced she would have never gone gotten into drugs and died of an overdose if she hadn’t been so traumatized by this event.

So I think, you know, when they tell these stories and then you have just the reaction of, oh well it’s, we’re, we’re super sorry to hear that. But because of the autonomy and independence of each of these individual, individual churches, there’s just not much that we can do. And it’s just, it’s just lip service at the end of the day, you know. They’re saying that they could put in prevention policies, they could put in some kind of requirement that would have these churches mandatory report problem people, or at least keep a network and form.

They, they certainly don’t have a hard time fundraising or amazing money for mission trips or staying in or connected for any other number of reasons that make them money. So why can’t changes being made that protect the very people that are going to them for guidance, spiritual guidance. I mean, not only are they wrecked their lives, in some cases emotionally because of the abuse I suffered, but also because the way the church responded, it doubled, you know, insult to injury.

It undermined their faith. So the whole reason they were going for support to begin with, now their faith is decimated. So it’s just a sad story all the way around in that regard. But good for these papers for bringing this to light Farron.

Farron Cousins:                  Absolutely, and thank you Mollye very much for telling us this story today. Mollye Barrows with Trial Lawyer Magazine, always appreciate it. Thank you.