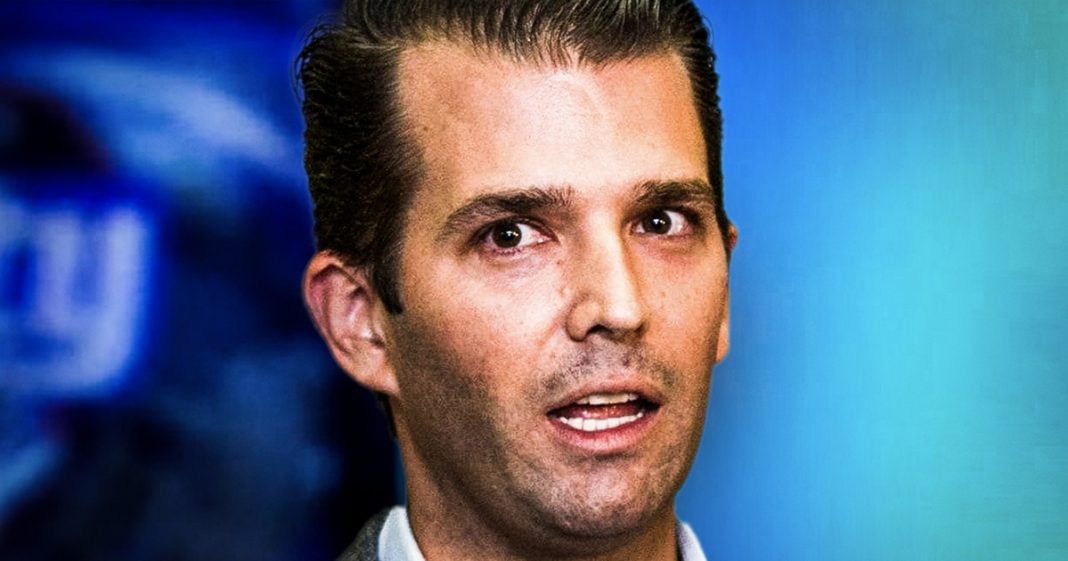 Donald Trump, Jr. tweeted out a link to a Breitbart article that allegedly claimed that Democrats were lying about tax refunds being smaller this year than they were in past years, even though conservatives are the ones saying that their taxes have gone up. Junior quickly got shot down by his own supporters who piled onto his Twitter feed to let him know how much they are getting squeezed by the tax cuts for the wealthy. Ring of Fire’s Farron Cousins discusses this.

Donald Trump Jr. is out there right now trying to convince Americans that they actually did in fact get some of that Republican tax cut he took to Twitter yesterday. And this was in response to all of the, uh, articles and headlines and Twitter comments from Republicans saying that, dammit, my taxes went up after I just filed. My refund went down. So Trump Jr. seeing all these people blaming his father for it, decided to go on Twitter, try to, you know, calm everyone’s fears and explained to them that, no, I’m smarter than you. And you actually did get a tax cut. Uh, he tweeted out this and middle-class most middle class Americans, God tax cuts, despite smaller early refunds, the smaller refund checks, we’re not indicators that taxes have gone up for middle class families with children over 80% got tax cuts, 80%. That’s a lot. That’s, that’s a big, big swath of this country.

Right. So what’s his source for this Breitbart? Immediately after typing these words or copying and pasting them, whatever he did, he linked to an article from Breitbart. Well to spare you the damage. I read the article from Breitbart, my Iq dropped a couple of points, but they will rebound eventually, I’m sure. Uh, there’s no links in the Breitbart article. There’s nothing, there’s no sources. It doesn’t say that we got this data from x, Y or z. They’re literally just making things up in saying to people, here’s what happened. Your paychecks increase last year. That’s where your tax cut was. And, and because the IRS readjusted the way they take out taxes, that meant you weren’t overpaying your taxes. So yeah, your refunds would be smaller because your refund only comes in when you’ve overpaid your taxes. They change the way they did the math. So you people are too stupid to know.

You did get a tax cut. So let us at Breitbart, let me, Donald Trump Jr. explained to you how much money you did get. Let me tell you something. Donald Trump, who calls teachers losers. Um, we didn’t get tax cuts. You asshole. We watched our paychecks every week, every other week, whatever it was. And they didn’t change. Last year we saw the federal withholdings and they didn’t go down. You’re sitting there lying to our faces about something we see several times a month and you think we’re not smart enough to know that we didn’t get a tax cut. Luckily I don’t have to be the ones to tell these, uh, to tell this stuff to Donald Trump Jr. because everyone in his comment thread did it for him and I’m not talking about liberal swooping in and correcting him. I’m talking about his father’s followers. The people who say, Donald, look, I’m a real big fan of you, but you’re wrong about this.

You’re wrong. You’re wrong, you’re wrong, you’re wrong, you’re wrong, you’re wrong, wrong all the way down the Twitter feed your wrong. And these are people that actually like him, people that actually respect him for some reason having to correct him because they know what they see. They know that they didn’t get a tax cut. They know their paychecks didn’t increase last year, but they’re seeing the refunds decrease this year because the Republicans took away a lot of the things that we were able to write off. Home offices, you know, supplies for teachers, all sorts of other things. These, these writeoffs that helped the middle class, those are gone and that’s why our tax refunds or the amount that we owe has either decreased if we were getting a refund or increased if we owe something. That’s pretty much across the board. Your 80% number that you pulled out a Breitbart, I guess is absolute fabrication. It is pure fiction and you know it. You just don’t care about it because you were one of the top 0.01% of income earners who got yourself a massive tax cut last year. We know what our paychecks say. We know what our tax returns say, we know what they had said the year before and the year before and so on and so on. Stop trying to lie to us, telling us that we got a tax cut that we know for a fact never materialized.