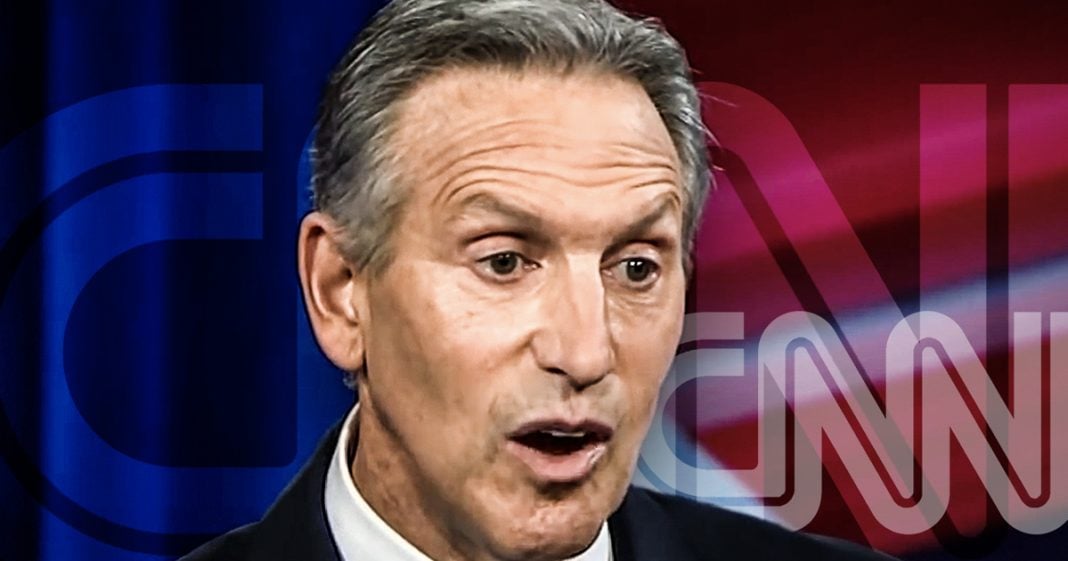 CNN thought they could strike gold twice by offering a prime time townhall audience for independent billionaire Howard Schultz. Unfortunately for them, they couldn’t even pull in HALF the number of viewers as both MSNBC and Fox News. Nobody cares what the whiny billionaire has to say, and his townhall proved that he certainly isn’t prepared to enter a Presidential race. Ring of Fire’s Farron Cousins discusses this.

Not long ago, CNN struck ratings gold with their Kamala Harris town hall that they air it on a Monday evening during prime time. It absolutely killed in the ratings was one of CNN’s highest rated programs in years. It’s so last week, or actually this week, excuse me, they tried to repeat the magic and they brought in whiny billionaire Howard Schultz Monday night and thought, hey, if we did great with Kamala, how about this guy? He was grabbing all the headlines Right now. He’ll be a ratings killer. And unfortunately for CNN, he was a ratings killer because CNN on Monday night, they’re little town hall with Howard Schultz, the billionaire, former CEO of Starbucks, uh, was actually one of the lowest cable news programming, uh, episodes on Monday evening. They couldn’t even get half of what both Fox News and Msnbc drew in terms of viewers that evening. Here’s the stats. Uh, during that same time, Fox News was showing Laura Ingram’s Ingram angle and they got 2.4 7 million total viewers, MSNBC, Lawrence O’Donnell to point 21 million and CNN’s Howard Schultz town hall, 1.0 4 million viewers.

So again, they couldn’t even break the half way mark to either of their rivals. And why is that? Because nobody in this country cares what Howard Schultz has to say. Probably the only people who were watching Howard Schultz is town hall where the people who on Tuesday either had to write a synopsis of it, write an article about it or do a video about it. That’s probably about it. And honest to God see it in what did you expect? The guy has a 4% approval rating, 4% support among the American public. And you thought this would be an awesome idea. No, it was a spectacular backfire. And that is exactly what your net work deserves for even giving this guy who has not officially declared that he’s running for president yet, this kind of audience, this is obscene. This is absurd. And this is disgusting because Howard Schultz, not only did he kill your ratings for the evening, but he also did that entire town hall without ever once talking about something he would do for this country.

He just talked about how horrible the ideas from progressive’s are, which the majority of the public actually likes those ideas. So he spent an hour, hour and a half, whatever it was, sitting there showing you how out of touch he is with the actual American public. Howard Schultz is ultimately most likely not going to end up running for president. He sees the writing on the wall. He can see these ratings numbers, and he can see his polling numbers. It would be a waste of money for him to even bother getting into this presidential race, knowing that he has zero chance of ever becoming the president of the United States.