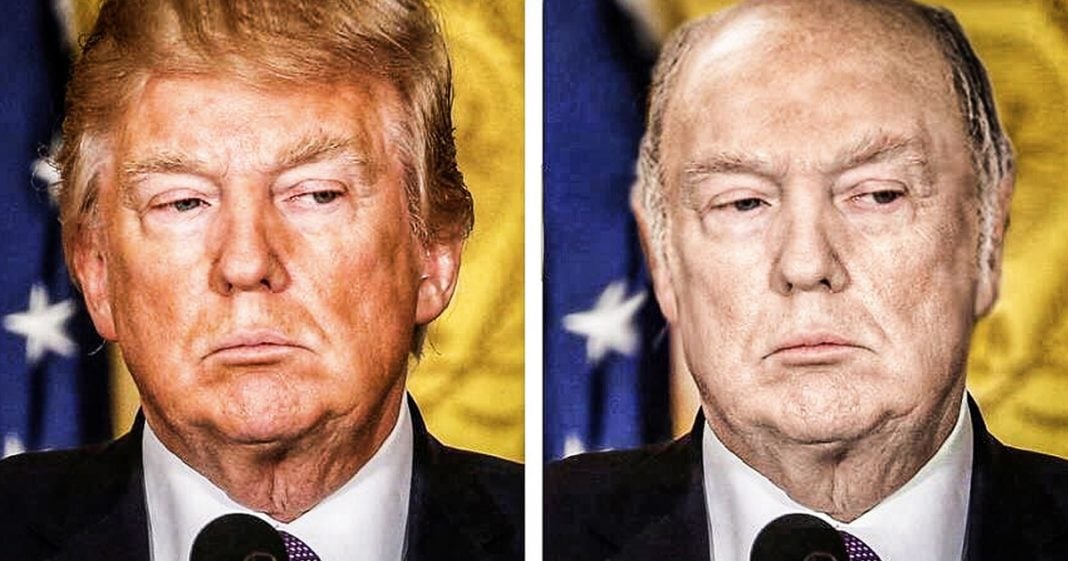 A photographer in New Zealand has taken the liberty of showing the world what Donald Trump would look like if he decided to be honest about his natural skin color and the fact that he’s losing his hair. The results were posted online after extensive photoshopping, and it shows that Donald Trump would be just a run-of-the-mill old white guy. Ring of Fire’s Farron Cousins discusses this.

Recently a Photoshop image of Donald Trump went viral on social media because this image was not mocking Trump. It wasn’t making fun of Donald Trump. It was showing what Donald Trump would actually look like if he wasn’t such a vain and vacuous individual. This image was created by a New Zealand photographer named Jordan Rivers. He posted on Facebook and what he did was he took a regular picture of Donald Trump, put it into Photoshop, did the color match tool, and he took the color around Donald Trump’s eyes. You know, where the fake Orange Tan has not been able to penetrate. So he then used that color from under the eyes and matched the rest of his face to it. He also removed the ridiculous comb-over and showed what Donald Trump would look like if he was just a normal human being that wasn’t trying to alter his appearance to make himself, I don’t know, appear younger, appear more virile, whatever it is, he wants to look a different way than he does.

And this new, uh, New Zealand photographers showed us the real Donald Trump. And this is it. This is the picture here. This is what Donald Trump would look like without the fake orange spray tan or tanning beds or whatever the hell it is. And if he had the courage to admit, you know what? I’m going bald. It happens. It happens to men all over the world and there’s nothing to be ashamed about with it. Trust me bud. But you can’t do that. And to me, that’s why this little project that this photographer put out there is so important. We have a president who we’re supposed to trust. We’re supposed to trust this person to handle our foreign policy, to make the right decisions for our military, to protect us as American citizens and enact policies that are going to benefit every one of us. And yet we can’t even trust him to show us who he really is.

He is fake. The Harris fake, the Tan is fake. Everything about this man is fake. And that’s what this photographer’s project was trying to show us because when you take away the comb over, you take away the fake Tan. What do you have left? You have a feeble, frightened white guy who’s so terrified that people might eventually peek behind the curtain and see how horrible he truly is. Or at least that’s what’s happening in his mind. There’s nothing wrong with being yourself with looking like yourself. You know, this guy could seriously pin a fit from some body positive, uh, advertisements here yet instead, he would rather spend more time hiding his true appearance than actually doing the job of being the president of the United States. And that’s just another reason why nobody in this country should ever trust this man. He’s more concerned about the Face he sees looking back at him in the mirror than he is about taking care of American citizens.