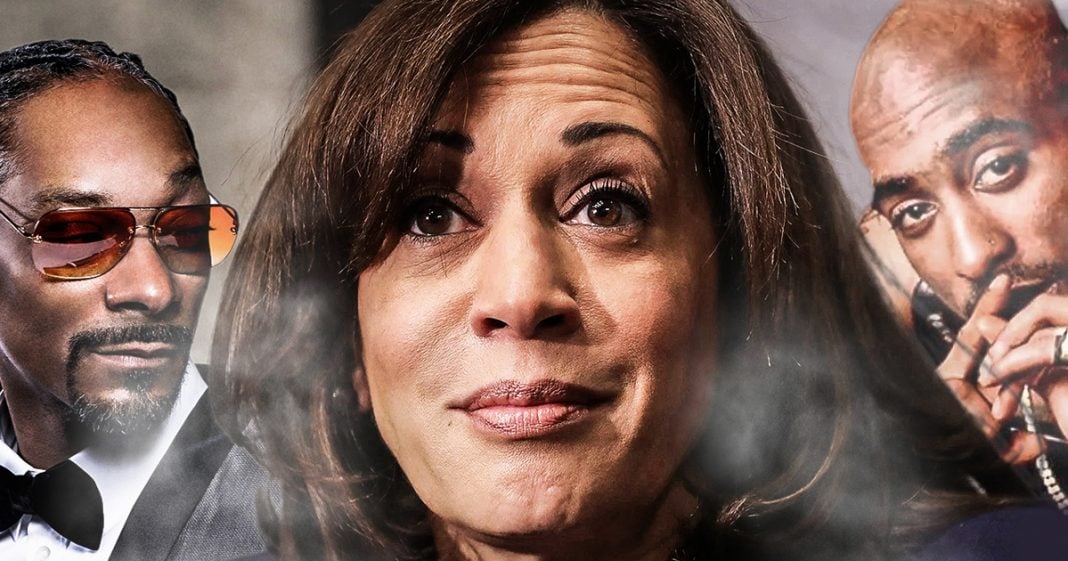 In an attempt to distance herself from her own past as a “tough on crime” Attorney General in California, Senator Kamala Harris said during a recent interview that she smoked marijuan a in college while listening to Tupac and Snoop Dogg. The only problem is that those two musicians didn’t release their first albums until long after Harris graduated college, and the internet was very quick to point out that she was lying. Ring of Fire’s Farron Cousins discusses this.

As more and more Democratic candidates announced that they would also like to run for president in 2020 it’s getting difficult for a lot of the people who’ve already announced to separate themselves from the pack. And recently Senator Kamala Harris appeared on the breakfast club show cause she thought she had a way to kind of separate herself and show just how cool and hip and young she is to a new generation of voters. And unfortunately it backfired spectacularly for Senator Harris. Here’s what happens. She goes on the breakfast club show and they ask her about marijuana policy and she admits that yes, I smoked marijuana in college and says, and yes, I did inhale a throwback to the Clinton era in case nobody’s familiar with that. But anyway, she’s trying to appeal to the younger generation, make herself look a little cooler and kind of shed the reputation she has of being a tough on crime attorney general.

She was then asked by one of the cohosts on the breakfast club, Charlemagne Tha God said, well, what kind of music did you listen to while you were getting high? And Kamala Harris said, oh yeah, Tupac and snoop for sure. Now I forgot to mention that. She said she did this while in college. That’s the key here. This took place according to Harris in this interview while she was in college and she was getting high and listening to Tupac and snoop. The only problem is that Kamala Harris graduated college in 1986 she didn’t graduated law school in 1989 two POCs. First album didn’t come out until 91 Snoop’s didn’t come out until 1993 so Kamala Harris had to get so high that she was somehow able to listen to music from the future that did not actually exist during the time when she claims she was getting high. Now here’s the thing.

This was something that was very easily verifiable and luckily the kind folks on Twitter, we’re very quick to point out her inaccuracies and say that, hey, something about your story’s not adding up here. What’s going on? But to me, it’s not just about the fact that, okay, she lied about this. Maybe she didn’t get high. Maybe she did. Maybe she forgot what she actually listened to and tried to throw out a few names to make her seem cool to a younger generation like, ah, Tupac and snoop for sure. Dog. Yeah. I, I don’t think that Kamala Harris actually thinks she was listening to those. I think she was trying desperately to come across as cool and that’s not necessary whatsoever. You’re not going to attract more voters by trying to say like, yeah, I smoked pot. I do drugs. I listened to rap music. I’m a pretty bad ass person, right?

She could have easily gone with any one of those talking points, but instead she had to try to be cool. She had to, you know, try to relate on a personal level and it fell completely flat and she ended up getting ridiculed for it. She is trying to make up for her past of being this tough on crime, Agee who wanted to send kids parents to jail when the kid didn’t show up to school, who failed to prosecute current treasury secretary, Steve Mnuchin for all of the financial crimes that he and his bank. We’re committing. You’re not going to be able to overcome those obstacles that you put in your own way by telling kids. Yeah, I used to smoke pot while listening to Tupac. Forget about my horrible history. Forget about the fact that I’m not even talking policy right now. Just focus on the part where I say I did one cool thing and ignore the fact that that’s already been debunked.